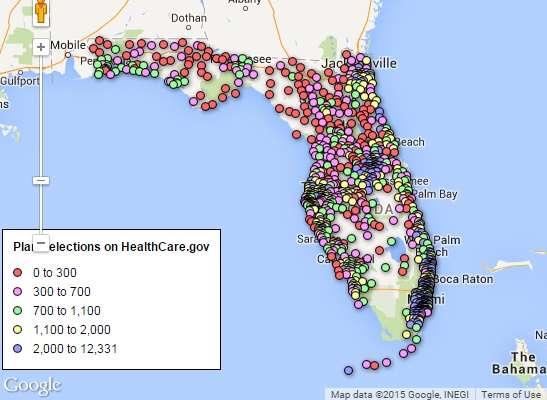 Florida continues to lead every other state using the federal marketplace health insurance marketplace, with just over 1.3 million who were enrolled or were automatically re-enrolled in a health plan as of Jan. 23.

The high numbers are due to high demand, federal health officials say.

“Florida continues to lead the way, and I think that has a lot to do with the demand and has a lot to do with the people on the ground, the assisters, the navigators, the outreach,” said Andy Slavitt, principal deputy administrator for the Centers for Medicare & Medicaid Services.”I’ve had the opportunity to listen to some calls in the call center, and people in Florida seem to be really enthusiastic about getting coverage.”

Federal data sorted by ZIP code show how many people enrolled in health plans on HealthCare.gov through Jan. 16.

More people enrolled in Miami-Dade County’s Hialeah (ZIP code 33012) than anywhere else in the nation, with 12,330 plan selections.

Data for ZIP Codes with 50 or fewer plan selections are not included, but the place listed with the lowest number of enrollments is Intercession City (ZIP code 33848), which is about five miles west of Kissimmee in Osceola County.

“I think the work we’ve done on CuidadodeSalud.gov and all of our language services, I think makes it easier for people who are bilingual or who are Spanish-speakers,” Slavitt said.

Lottie Watts is a producer/reporter with WUSF in Tampa. WUSF is a partner with Health News Florida, which receives support from the Corporation for Public Broadcasting.

Health reporting on WMFE is supported in part by Florida Hospital and the Winter Park Health Foundation.