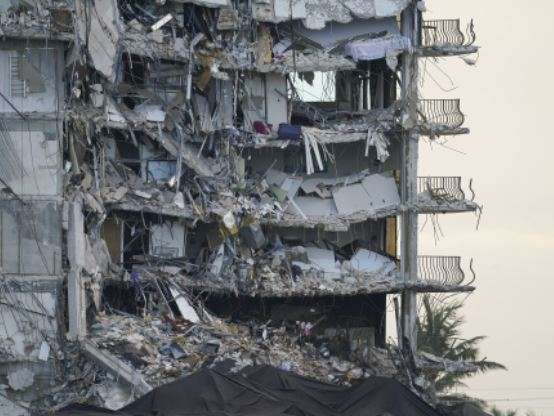 A section of rubble at the Champlain Towers South condo building on July 4, 2021 in Surfside, Fla. (Lynne Sladky/AP)

The state legislature has added condo building reform to this week’s special session on property insurance. Lawmakers faced pressure to overhaul current laws after a deadly building collapse in South Florida last year, but the two chambers failed to reach a compromise on forcing condo owners to pay to repair aging buildings earlier this year.

“It was important to the House that if there was a structural integrity issue for a building, that people do what’s necessary to defend the people that live there, to protect themselves by making sure they fix it and put the dollars aside to fix it,” he said.

The Surfside building faced millions of dollars in repairs and had significant concrete and other structural damage to its pool area which led the structure to fail, killing 98 people.

Under the newly filed legislation, condo buildings three stories tall and higher must be inspected when they reach 30 years old, and every 10 years after that.

Buildings near a coastline would need to be inspected at 25 years of age and then reinspected every 10 years.