Finding A Jury Of Your Peers Actually Is Pretty Complicated 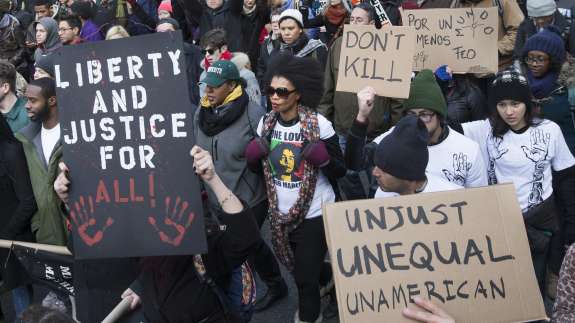 Demonstrators march in New York after grand juries failed to indict police officers in the deaths of Eric Garner and Michael Brown. Many are calling for the officers to be tried before a jury of their peers.
Image credit: John Minchillo

Over the past few weeks, thousands of people have protested after grand juries failed to indict police officers in the deaths of Eric Garner and Michael Brown. What they wanted was to have the officers tried in an open court before a jury of their peers. But the notion of a jury of your peers isn’t so straightforward.

Take, for example, 21-year-old Roderick Giles’ experience. When he got a jury summons in the mail, he reacted the way a lot of people do.

Luckily for the California resident, the judge dismissed him because he was 10 minutes late getting to Sacramento County Superior Court. But ideally, that’s not how jury selection is supposed to work.

Potential jurors generally are questioned first, then dismissed — and it can take a long time. Earlier this year in Atlanta, 600 prospective jurors were summoned for the high-profile trial of 12 public school teachers and principals accused of correcting students’ answers on standardized tests. Even then, defense attorney Bob Rubin challenged the pool because he said it underrepresented African-Americans.

“All of the defendants are African-American,” Rubin says. “And if they’re entitled to a fair cross-section of their peers, then their peers ought to be represented correctly in the jury pool.”

The judge dismissed that challenge. He also excused anyone who said it would be too much of a financial burden to not work during the six-month trial. But when a disproportionate percentage of those people ended up being African-American, the judge said he would call them back in and order their employers to continue paying them if they were selected. After all, Rubin says, race matters.

“In my 28 years of experience, black jurors are generally more suspicious of law enforcement than white jurors,” he says. “They tend to take what the government says with a grain of salt more than white jurors do — and to me, that mattered.”

Shari Seidman Diamond, a jury expert and professor at Northwestern Law School, says the jury system has changed a lot in the past 200 years.

“Jury trials in early times were quite short,” she says. “When jurors went back to deliberate, there were instances where they were kind of locked up without food or drink until they delivered a verdict.”

It was also common for jurors to know the defendants and the witnesses, which no longer is allowed. And most importantly, for a long time only white men could serve on juries.

Seidman Diamond says the idea of a “jury of your peers” comes from the Magna Carta, but the phrase doesn’t actually appear in the U.S. Constitution. Instead what we have is a right to “an impartial jury” drawn from the surrounding region.

“The meaning has come to represent an interest in having a cross-section of the community who are eligible to be on your jury,” she says.

After all, the jury system isn’t just about defendants who want a fair trial; it’s also about the community participating in the system of law.

And while many people dread the prospect of jury duty, those who serve often end up liking it. San Francisco resident Gerald Spotts, who was waiting outside the courtroom for what would be his third stint on a jury, says he enjoys watching the legal system at work.

“It helps you understand, if you ever get in trouble, what you might have to deal with,” he says.