Faced with diminished state funding, some turn to crowdsourcing for land conservation 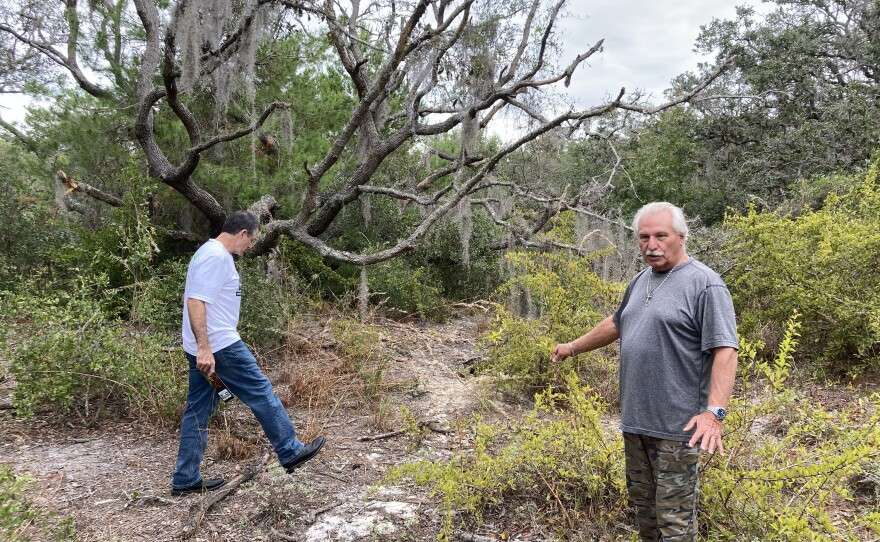 The gates are unlocked on fourteen acres of trees and Florida scrub, just before West Klosterman Road dead-ends at the Gulf of Mexico.

Walk a few feet inside into a scene that could have been witnessed by native Americans centuries ago. Brad Husserl picks up a arrow fragment made of a rock called chert.

“Looking at this piece, it almost looks like someone was trying to create an arrowhead. So this could possibly be a prehistoric arrowhead. You find it, just walking around, after it rains.”

Husserl is chairman of the West Klosterman Preservation Group. It’s a group of local residents who have banded together to prevent this home to more than 60 species of native plants, trees and wildlife from becoming another subdivision.

Now, all they need is about $3 million dollars. By July.

So far, they’ve raised only 10 percent of the money being asked by the owners of the property – Pinellas County Schools.

This isn’t a new strategy in Florida. Last year, activists raised about $10 million dollars in donations to preserve the Gladys Douglas Hackworth property in Dunedin.

Husserl says he’s encouraged their efforts could save this parcel that would connect with the county’s 76-acre Mariner’s Point management area, just to the north along the Gulf.

“That actually does give us a lot of hope, because it proves that we have local foundations, or let’s say local citizens, who have the means to save the properties like this that are interested in saving the properties, and they’ve stepped forward and done it.”

Preserving land used to be the sole domain of local governments and states. But with rampant development closing in on many more urban parcels, locals are needing to step up to preserve spaces that fly under the government’s radar.

Jaclyn Lopez of St. Petersburg is the Florida manager of the Center for Biological Diversity.

“When you see some of the last spaces that have trees and just a bit more nature and there’s a real risk of losing it, it just mobilizes people in a way that maybe they don’t feel motivated until it’s at that threshhold moment where it’s about to blink out.”

Florida currently has about 10 million acres – nearly one third of the state – in protected public and private lands. Four and a half million acres are wetlands and federal holdings, like Everglades National Park.

Since Florida Forever – the state’s main land preservation program – was launched in 2001, it has purchased nearly 900 thousand acres at a cost of over 3 billion dollars.

Klosterman group organizer Donald Richardson says the focus of that program has been on larger, rural tracts. They really don’t care about this postage-stamp parcel of only 14 acres.

So it’s up to “locals” like him to preserve smaller, overlooked places.

After moving from the concrete of Detroit to get his doctorate in botany at the University of South Florida, Richardson says he realized these smaller places are what makes Florida special.

“So if you find that open space gives you that piece of mind, then what you find that people are doing is to say, I need a cause. I need something that gives me a place to go. A place to sit. A place to get away from all that noise and stuff like that.

So Richardson would like to see the fate of this piece of natural Florida be like other successful crowdsourcing projects like the Gladys Douglas Hackworth property or Celery Fields in Sarasota – and not become yet another subdivision.