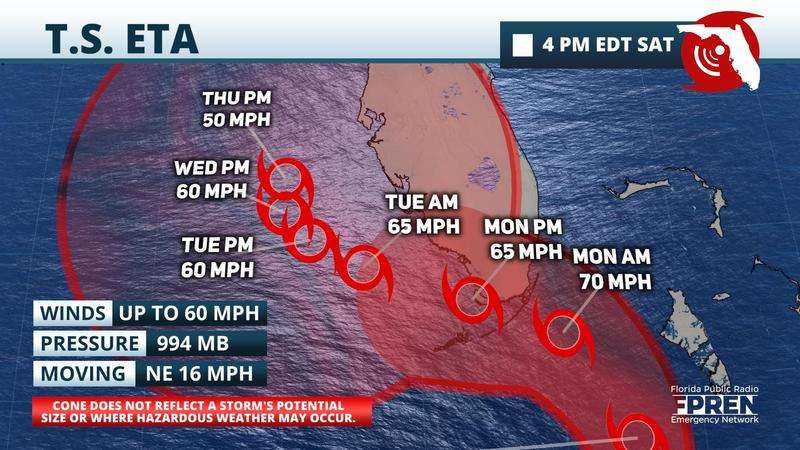 A Hurricane Watch and Storm Surge Watch have been issued for portions of South Florida, ahead of a strengthening Tropical Storm Eta’s approach.

The Hurricane Watch is in effect for coastal areas from Deerfield Beach to Bonita Beach, and for the Florida Keys from Ocean Reef to the Dry Tortugas, including Florida Bay and Biscayne Bay. The Storm Surge Watch includes roughly the same coastal areas, but only extends north to Golden Beach on the Atlantic Coast.

Tropical Storm Warnings were also issued in anticipation of strong winds and heavy rain that are expected to arrive Sunday. The warning includes the counties of Broward, Collier, Glades, Hendry, Miami-Dade, Monroe and Palm Beach. This includes the Miami, Fort Lauderdale, West Palm Beach and Naples metro areas, along with all of the Florida Keys and Key West.

Eta regained tropical storm strength Saturday morning, and continued to intensify as it accelerated toward Cuba Saturday afternoon. As of 4 pm EST, hurricane hunters found that Tropical Storm Eta had winds up to 60 mph and a minimum pressure of 994 mb. The storm was located 195 miles west-southwest of Camaguey, Cuba and was moving northeast at 16 mph.

The forecast track of Tropical Storm Eta has been nudged northward over the past 24 hours, although model simulations have been persistent on suggesting the heaviest rain and wind from the storm will affect a large portion of South Florida regardless. Eta is expected to cross Cuba Sunday, then move over the Florida Keys or the southern tip of the Florida Peninsula Monday, followed by a slower forward speed as it moves west into the Gulf of Mexico Tuesday. Thereafter, uncertainty is too high to make a credible projection on where or whether Eta might make a second landfall across portions of northern Florida or dissipate entirely. However, confidence is high that upper-level steering currents are likely to weaken, thereby causing Eta to move extremely slow or even stall Wednesday or Thursday over the eastern Gulf of Mexico.

Environmental conditions are only marginally favorable for Tropical Storm Eta to maintain tropical characteristics or intensify much further before landfall in Florida. However, interactions with a nearby upper-level disturbance may act to enhance Eta’s rain and wind, and force those conditions to spread much farther from the storm’s center. It is also possible that Eta would briefly reach hurricane strength over the Florida Straits, although this will have little effect on the anticipated impacts to aforementioned areas under a watch or warning.

Inland fresh-water flooding is still the greatest hazard from Eta in South Florida, especially across Miami-Dade, Broward and Palm Beach counties where soils are saturated and many bodies of water are already full from a very wet October. Pockets of heavy rain were already observed spreading over much of South Florida Saturday, well removed from Tropical Storm Eta’s main area of thunderstorm activity south of Cuba. The rain is only expected to become steadier and heavier Sunday night and Monday as the center of Eta moves closer.

Rainfall accumulations in southeast Florida may exceed ten inches over the next three days, with 4 to 8 inches most likely near and southeast of a line from Naples to Fort Pierce, Florida. Lesser rainfall amounts of 2 to 5 inches are expected near and north of a line from Fort Myers to Melbourne, although uncertainty remains on how much rain may fall beyond Tuesday depending on the eventual track and strength of Eta in the eastern Gulf.

Sustained winds of 40 to 50 mph, with gusts up to 60 mph, are most likely to arrive in southeast Florida near Miami and the upper Keys late Sunday evening. Winds of this strength are possible in southwest Florida near Naples by early Monday morning. Sporadic power outages from downed trees or power lines should be planned for in these areas when the strongest winds arrive. The highest gusts are most likely to accompany the heaviest rain bands, which could arrive well before the center of Eta passes nearby.

A storm surge of 2 to 4 feet is possible in the Storm Surge Watch from Golden Beach to Bonita Beach, which includes the Florida Keys and Biscayne Bay. Residents near the coast and in the advised area are encouraged to listen to local authorities for possible evacuation orders to be given Sunday. A storm surge of 1 to 3 feet is possible farther north along the Treasure and Space Coasts, with 2 to 3 feet possible along the First Coast. Coastal flooding is expected in these areas even though they may be hundreds of miles from Eta’s track due to the strong and persistent onshore flow out of the east-southeast. The uncertainties around Tropical Storm Eta’s eventual track and strength make a credible storm surge forecast across west-central Florida and along the Nature Coast not possible at this time.

Brief, fast-moving tornadoes will be possible from Tropical Storm Eta across most of South Florida Sunday, then potentially for areas farther north into Central Florida on Monday. The tornado risk will be contingent on where the strongest rain bands move in association with the areas of greatest spin. Large waves and high surf are also anticipated from the storm on both the Atlantic and Gulf coasts, increasing the risk of rip currents at all area beaches. Swimmers and boaters are encouraged to stay docked and out of the water until Eta dissipates or moves away sometime late next week.