Enrollment Is Dropping In Public Schools Around the Country 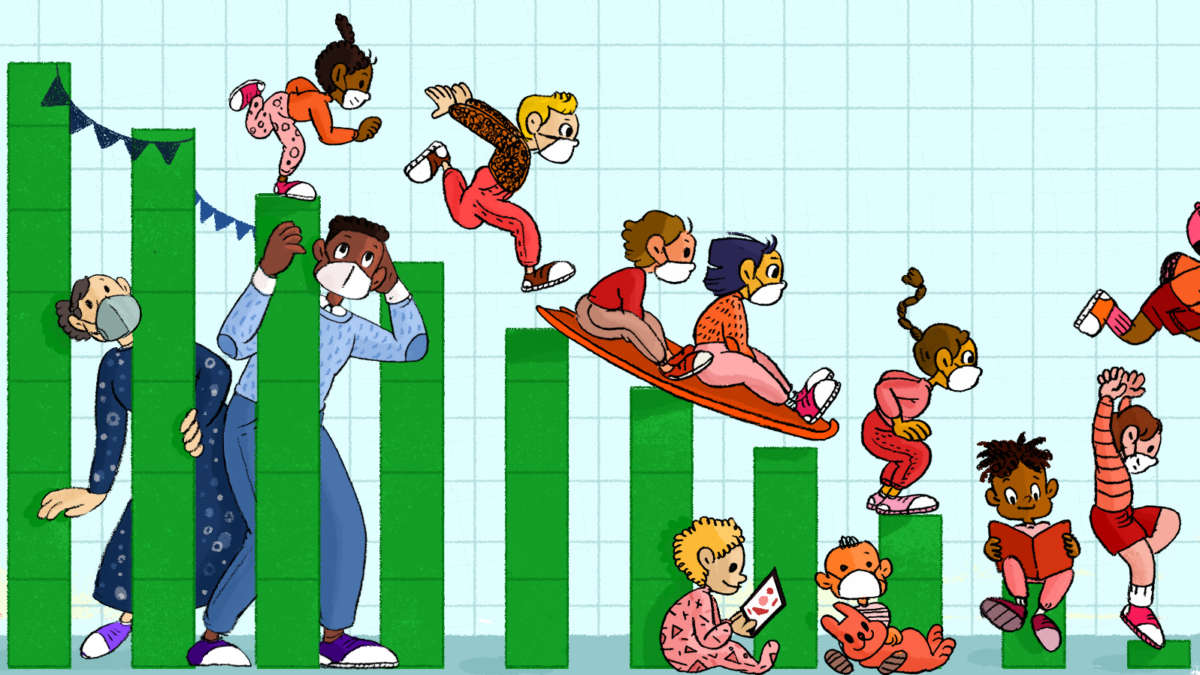 Comprehensive national data aren’t available yet, but reporting by NPR and our member stations, along with media reports from around the country, shows enrollment declines in dozens of school districts across 20 states. Large and small, rich and poor, urban and rural — in most of these districts the decline is a departure from recent trends. Over the past 15 years, data from the U.S. Education Department show that small and steady annual increases in public school enrollment have been the rule.

Six months after schools around the country shut their doors amid coronavirus lockdowns, these fall enrollment declines come as schools have been scrambling to improve remote learning offerings, and to adopt safety procedures to allow buildings to open for in-person classes, sometimes just a few days a week. In many parts of the country the start of the year has been marked by multiple changes in plans, widespread confusion among teachers and families, deep concerns about safety, and worries about unequal access to technology.

“We are not alone in this,” Chris Reykdal, Washington State’s Superintendent of Public Instruction, said in a statement this week announcing a 2.82% decrease in enrollment statewide, driven by a 14% drop in kindergarten. “As our nation continues to fight the spread of COVID-19, states across the country are seeing changes in K–12 enrollment as families make decisions about the safest and most effective learning environments for their children.”

Reykdal said operational cuts might be looming, and schools would lobby the state for stopgap funds. “Counts are taken every month, and if these trends continue, many of our districts will need to make adjustments in the short-term even as they plan for booming kindergarten and first grade classes next year.”

Many education experts are skeptical about the virtues of remote learning for very young children, and lots of parents seem to feel the same way.

“It was either going to be virtual or hybrid, or if they were in person it was going to be weirdly socially distant and masked,” says Megan Olshavsky, whose son was scheduled to start kindergarten this fall in Austin, Texas. “And he wouldn’t be able to interact, really, with other kids.”

Instead, Jonah, who is almost 6, is staying in his small private Montessori school for kindergarten, where he’ll attend in-person, full time.

“We had signed him up to start in Austin in the beginning of the year and then, you know, in the late spring and the summer, we kind of realized that school wasn’t going to look normal,” Olshavsky said. The school district started the year with four weeks of virtual learning before phasing in small groups of students.

Jonah’s Montessori cut class sizes to fewer than 10 students to reduce the risk of COVID spread. And since it’s licensed as a daycare, the children aren’t required to wear masks. Meanwhile, the Austin Independent School District is down 5,000 students this fall, a 6% drop.

Olshavsky says she and her husband will have to tighten their belts to afford another year of private-school tuition.

And school districts stand to lose money as well.

Public schools are generally funded by states on a per-pupil basis. This first week of October marks the first of two “count days” in many states — a day in the fall, right at the start of the new fiscal year, where school districts must submit an official enrollment count to determine their funding for the subsequent year.

And that system tends to favor schools in better-off communities, which get more of their funding from local property taxes, explains Bruce Baker, an education professor at Rutgers University. It’s the less well-funded districts that are more dependent on state aid.

“If you’ve got a district where 70, 80 % of the money is coming in state aid based on some enrollment count number, which would tend to be a poorer district serving a higher share of low-income and minority students,” he explains, “those districts stand to lose a lot if the state decides to follow through with using this year’s enrollment counts as a basis for funding in the future.”

The potential loss is a hardship for school districts that already are facing the costs of schooling during a pandemic — from masks and hand sanitizer to hiring additional teachers to run both in-person and virtual programs. On top of that, the coronavirus-induced recession has already driven education budget cuts across the country.

Stephanie Elizalde, the superintendent of Austin ISD, told NPR that the state of Texas has agreed to “hold the district harmless” for enrollment declines for the fall semester only. She is hoping that students start to show up in greater numbers now that the school doors are open a few days a week. Otherwise, she says, “we could have huge cuts.” “I don’t think there’s ever been a time I can recall where I visited with colleagues and all of us are like, how are we going to manage this?..knowing that you have these cuts during the most economically challenged times and a pandemic is–I mean, that’s just unheard of.”

Baker agrees that a downturn in enrollment this fall does not automatically equal a budget cut next year— states have time to pass measures in the spring to help schools make up the gap in funds.

But in the meantime, budget pressures may push schools to make reopening decisions that they wouldn’t otherwise. In Florida, for example, enrollment in Miami-Dade, Broward County and Orange County — all of which are in the top 10 largest districts nationwide — has dropped by several thousand students each.

Back in July, on the same day President Trump implored schools on Twitter to open in the fall, the Florida Department of Education offered school districts the following deal: Reopen and get funded based on the much higher enrollment levels from before the pandemic. Or don’t, and get funded based on the actual number of students. Plus, districts will get about $2,500 less for every student who remains online-only.

Judith Marte, the chief financial officer of the Broward County schools, said at a recent school board meeting that the expected enrollment drops of 8,500 students could lead to a significant reduction in a district budget that is already “disgustingly low.” And that shortfall, she added, could lead to potentially cutting thousands of jobs.

On the other hand, echoing the difficult decisions educators around the country have faced, Marte said she worries about the safety of returning students to buildings full time: “This is also incredibly stressful for staff, it’s incredibly stressful for this board and the superintendent … To do what’s right for our community, it’s a very, very difficult place to sit.”

Concerns about the youngest students

“The inequity of the situation is just really staggering,” says Olshavsky, the mother in Austin. “We were basically able to pay to keep our kid in a safe learning environment.”

Austin Superintendent Elizalde agrees that her main concern is an “exacerbation… of opportunity gaps in students from different economic backgrounds.”

Not all families have the means to send their children to private school, or devote a parent to home schooling full time. Some families, says Elizalde, will be leaving children home with older siblings or to sit in front of the TV.

Jessica Diaz is a nurse in Tampa, Fla., married to a firefighter, with three daughters. Since she and her husband work in high-risk environments, they don’t want to send her children to school in person. But she’s struggling with the district’s online learning offerings, too. Her children’s nanny is Spanish-speaking and has trouble with tasks like navigating Zoom class meetings.

“I don’t think [virtual school] is a sustainable option for our family at this point,” she told NPR. “For all of the burden of constant emailing, changes in schedules, assignments and submissions, etc., we feel the content of the education that is being delivered is far below our girls’ capabilities and not worth the trouble at this point. ”

She plans to pull them out and home-school after the winter break, when she hopes she’ll have time to put together a curriculum; but she’ll have to do the actual teaching herself in the evening hours after work.

Experts in early childhood education agree with Elizalde that keeping kids out of kindergarten and pre-K, in particular, is likely to exacerbate existing inequalities. Kindergarten is not compulsory in most states. That means children can sit out the year without necessarily doing formal homeschooling or private school.

They may enter next year as first graders, or simply delay the start of kindergarten — a practice sometimes called redshirting and, in normal times, more popular among affluent families and boys.

Diane Schanzenbach, an economist at Northwestern University who studies redshirting, says starting kindergarten late has no long-lasting educational advantages and may even have some drawbacks, for example in lifetime earnings. And Chloe Gibbs, an economist at the University of Notre Dame, says decades of research have underlined the importance of early childhood enrichment for all children, and especially for children from lower-income and less educated families. “We have consistent evidence that these kinds of interventions can have big effects on children’s both short-term skill development, but really importantly, their long-term life chances.”

In other words, pre-K and kindergarten are the rare educational interventions that both narrow gaps and lift all boats.

When families keep children home, the opposite may be true, says Gibbs. “Parents may be choosing not to send their kids to pre-K or to hold back their age-eligible kids from kindergarten,” she explains. ” And that could be fine for kids in terms of their skill development, if they are in homes where they’re … reading a lot.”

But, she adds, what experts really worry about are kids “for whom this early childhood landscape has changed so much. And what are they getting kind of in the absence of having those important early experiences?”