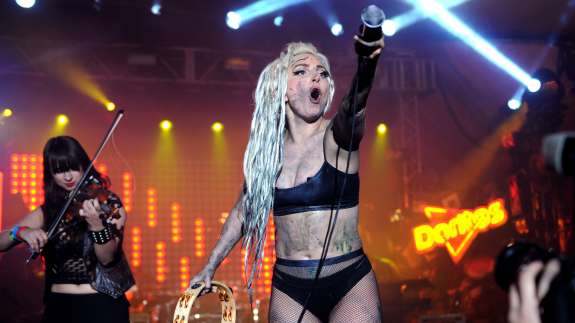 At SXSW 2014, pop star Lady Gaga performed on a stage made to look like a five-story-tall Doritos vending machine, which won't be returning this week.
Image credit: Kevin Mazur

South by Southwest is in its 28th year, with its music festival starting Wednesday and featuring more than 2,200 bands from 62 countries.

But there were dark clouds last year. A driver plowed into a late-night crowd of fans, killing four and injuring two dozen others. Add that to the perennial complaints about too much corporate branding — like last year’s Doritos stage — and large, drunken crowds. People are asking: Can SXSW reclaim its soul? At the audio link, hear SXSW co-founder and managing director Roland Swenson talk about the festival’s growth and new security detail.