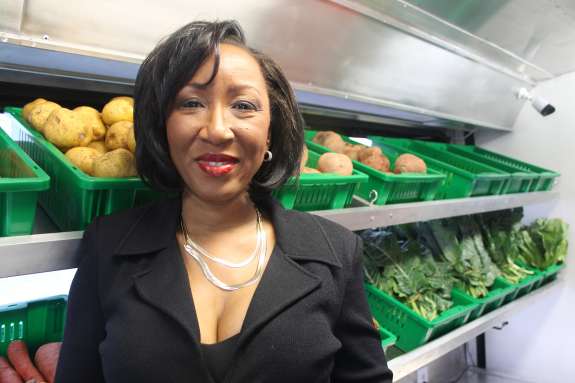 The promise of a new year often comes with a familiar resolution: eat more fresh fruits and vegetables and get healthy.

But for the 23.5 million Americans living without easy access to a grocery store, eating healthy isn’t easy.

One Central Florida nonprofit this week started bringing a mobile farmers market into neighborhoods that need it.

It might look like an old orange and yellow Lynx bus on the outside, but inside, it’s a cornucopia of fruit and vegetables: bright oranges, crisp red apples, sweet potatoes. There’s even a cooler, a juice bar and a human-powered smoothie machine.

Access to fresh fruits and vegetables isn’t just about lifestyle. It can have a big impact on health.

“There’s a strong correlation between diabetes, cardiovascular disease, hypertension and childhood obesity for communities that live in food deserts,” said Roniece Weaver, a nutritionist and founding partner of Hebni Nutrition Consultants and developer of the mobile farmers market. “These are all nutrition-related issues that are fixable.”

Weaver hopes the Fresh stop bus will help,  by bringing fresh fruit and vegetables to some of the 90,000 Orange County residents who live in so-called food deserts.

Here’s how the USDA defines a food desert: A low income community where one third of residents live more than a mile from a grocery store.

Fresh Stop has routes through Bithlo, Pine Hills, Parramore, and more than a dozen other low-income neighborhoods. Parramore resident Lashawnda Brown says she’d use the bus.

“I would. Anything to save a trip, either for walking too far, yes I would. I think that would be awesome, wonderful,” Brown said.

Brown feeds her three children and a total of 10 family members every day. Brown makes a weekly shopping trip on a city bus- but getting to the supermarket wasn’t always this easy.

The east-west bus line that runs to the grocery store only opened last April.

“We would try to find transportation or pay someone to take us, but since they opened up that line, it’s been wonderful,” Brown said.

Back at the Fresh Stop kick off, local chef Sevarrest Allen demonstrates how to make a sesame Asian salad from scratch.

Eating healthy doesn’t have to be expensive.

Pamela Ellis was at the kickoff. Ellis said she lost 15 pounds after attending cooking classes like this one. She wanted to change her lifestyle after caring for her diabetic grandmother.

“I used to have to give her insulin shots,” Ellis said. “And I wanted to be healthy.”

The bus is getting praise from local officials. But some say it’s only a stop-gap.

“We need to entice the big guys to come in and build smaller stores, perhaps,” said Orange County Commissioner Pete Clark. “And have fresh produce, and have fresh juice.”

Getting big box stores to build in an impoverished neighborhood? That’s a tougher proposal than tricking out a city bus.

Check here for list of routes for the Fresh Stop Mobile Farmers Market.