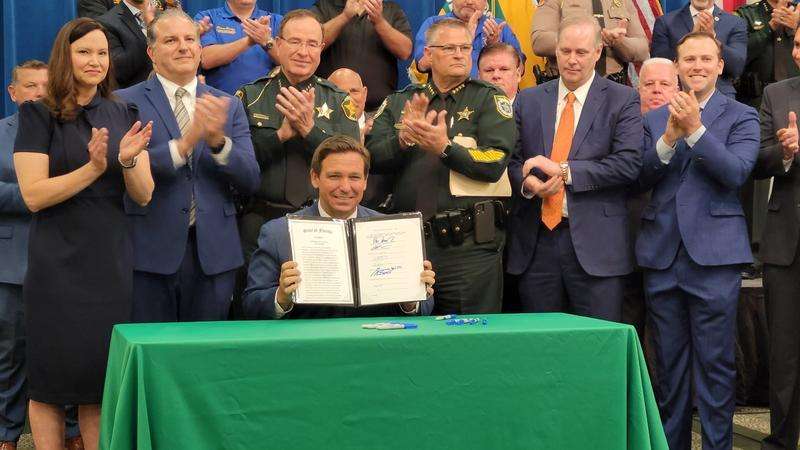 Fla. Gov. Ron DeSantis and others after signing HB 1, often referred to as the 'anti-riot' bill, into law. Photo: The Office of Florida Governor Ron DeSantis

On today’s program, we took a closer look at the continued controversy around Florida’s “anti-riot bill” or HB-1, which Governor DeSantis signed into law on Monday. The bill raises the penalties for violence, burglary, looting and property damage during protests, among other things.

Supporters say the new law gives added protection to innocent people who might get caught in the crosshairs of violent protests.

Critics say the law contains vague language that could lead to people being arrested while demonstrating peacefully.

On Wednesday, a group of civil rights attorneys filed a lawsuit against it.

The following guests joined us to discuss all of this, and more:

Thursday marked the 51st anniversary of Earth Day. More than 1 billion people across 192 countries marked the day by taking part in activities to address climate change and promote sustainability.

President Joe Biden was one of them – he pledged Thursday to slash U.S. emissions of greenhouse gases by 50 percent by the year 2030.

Meanwhile, here in Florida, state leaders are finally starting to take climate change more seriously. A new statewide resiliency program approved by both the Florida House and Senate will help coastal and inland communities alike harden their defenses against rising seas and other impacts.

Public media environmental journalists from across Florida joined us to discuss all this in more detail. They included:

Heather Schatz can be reached at hschatz@wjct.org or on Twitter at @heatherschatz.