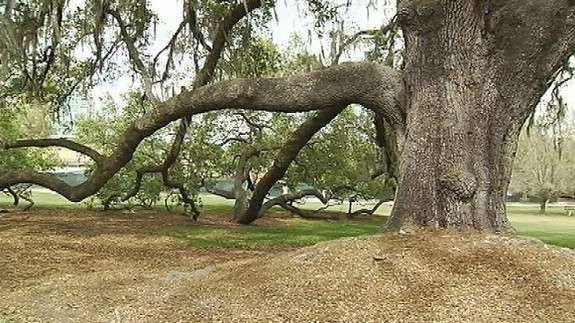 When Mayor Buddy Dyer made his State of Downtown speech in December, his speech highlighted 10 things that Project DTO determined residents wanted their downtown corridor to be and one of the major things the project mentioned was that people wanted a vibrant outdoor city with parks and greenspace and plenty of opportunities for outdoor activities.

So it came as more than a little bit of a surprise when downtown residents learned last week that one of the few significant greenspaces in the downtown corridor, Constitution Green Park, could soon be passed into the hands of developers who could turn it into condos or apartments.

The park, a pretty but unadorned greenspace at the corner of Summerlin and South Street, is home to a handful of massive old oak trees with branches that bow down to touch the ground, one of the trees is estimated to be 175 years old, and it’s on the city’s map of “significant” trees. But that won’t save them or the park from being plowed under. That’s because this particular park isn’t actually owned by the city. A private company, called Mabel Groves, owns it. The city has maintained it as a park for years, but now the owner wants to sell it. And despite attempts to negotiate with them, says City Commissioner Patty Sheehan, the city hasn’t been able to come to an agreement with them to allow the city to purchase it.

That’s the owners’ prerogative, of course, but that doesn’t mean city residents are taking the news sitting down. They’re organizing petitions and scheduling a rally at the park for Saturday, March 21 from 4 to 6 p.m. to draw public attention to the park some say they want it preserved, others are suggesting that at least the trees be saved, some are saying it should be turned into a dog park.

One thing everyone except the owner seems to agree upon: We should not pave paradise and put up that parking lot.