Citrus Greening Cure Is Closer, But Will It Be In Time For Florida’s Beleaguered Growers? 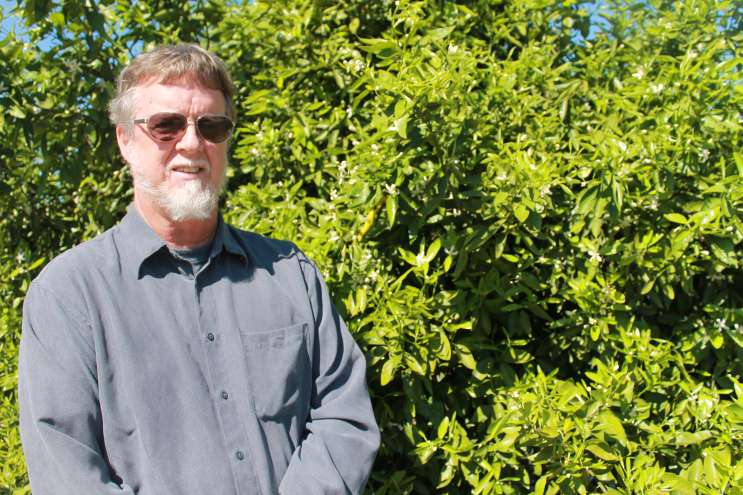 Jude Grosser is among the University of Florida researchers working to breed or engineer new citrus trees resistant to greening. Photo by Amy Green

Florida researchers believe they are closer to a cure for citrus greening.

The disease has devastated the state’s $10 billion iconic crop and is spreading in other states like California and Texas.

But will a cure arrive in time to save Florida’s oranges?

Jude Grosser describes this as the mother tree.

“This tree has had citrus greening disease for about five years, and as you can see it is exceptionally tolerant.”

The tree is large and lush, hardly like the more sickly trees in this grove of the University of Florida’s Citrus Research and Education Center. It’s the world’s largest research center devoted to a single crop. Located in bucolic Lake Alfred, outside of Lakeland, the center is considered the front line in the fight against one of the worst diseases to hit a U.S. crop.

Grosser helped develop the tree through conventional breeding. What excites him is that its offspring are similarly tolerant, even when the other parent succumbs easily to greening.

“We’ve picked five or six 90-pound boxes of fruit off of this tree the past two years, and we’ve actually been sending it to Gainesville for Christmas gifts to the university administrators, right off of this tree right here.”

The tree is among several that stand to be what everyone in the U.S. citrus industry is dreaming of, a silver bullet for citrus greening.

In hardest-hit Florida the disease has been unstoppable, reducing production by some 70 percent from the industry’s peak nearly 20 years ago. The disease is in every citrus-growing county, rendering fruit unusable by weakening and eventually killing trees. Citrus is the leading crop in the state, which is second behind Brazil in oranges grown for juice.

The disease has been so unrelenting many believe the silver bullet will be entirely new citrus trees that are resistant or essentially immune to greening. In Lake Alfred researchers also are working on genetically modified trees using a gene from the mustard family to enhance their defense system. And they are exploring whether the gene controlling the trees’ response to greening could be “turned off,” making them symptom-free despite infection.

Michael Rogers is director of the University of Florida’s Citrus Research and Education Center.

“If things continue like they are I think that we’re definitely a lot closer to the solution, and these could actually be a silver bullet.”

The problem is these trees face several years of testing before they can be made available to growers, some of whom are abandoning groves because of the industry’s dire condition. That is why researchers also are working on short-term remedies.

“We have to find a way in which the antibiotics penetrate into the plant so they can act and cure the disease, and so in this way this is where I come in with a laser machine.”

Ed Etxeberria is developing a machine using lasers to open wounds in a tree’s leaves, like a shot through a person’s skin.

A tractor will tow the machine through a grove while its six arms fire the lasers, deliver the antibiotic and seal the wounds with a waxy substance.

Etxeberria thinks the machine will be available in the fall. The help can’t come soon enough for growers like James Shinn, a fourth-generation grower raising citrus, peaches and cattle. He walks among rows of 3-year-old citrus trees already succumbing to greening.

He has abandoned three groves and turned to peaches to help sustain his business.

“The problem we all have in this industry right now is we’re all running out of money. If it’s costing us more money to produce a crop than we’re getting in sales, which it is at this time, then we’re running negative, and you can only run negative for so many years and still consider yourself a viable industry.”

But Shinn is a citrus grower, and he plans to replace his peaches once a silver bullet for greening is available. He could be waiting for a decade.