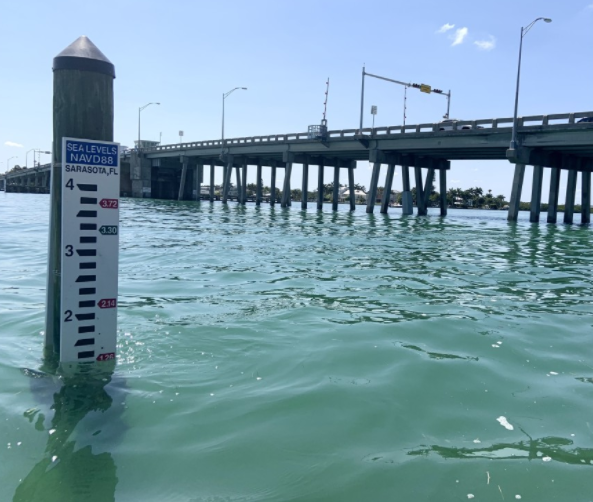 The City of Sarasota installed a tidal marker in the water near Siesta Drive to show tidal variations and how factors can influence water levels. King tides preview how sea level rise could affect coastal communities. (Photo by: City of Sarasota)

This week, many coastal areas around the U.S. will experience extreme high and low tides. King tides happen once or twice a year when the moon, earth, and sun are aligned and the moon is closest to the earth.

A citizen-science initiative aims to document these tides with photos.

Christine Quigley of the Sarasota Bay Estuary Program, says the organization is part of the initiative and is hosting its own king tides photo contest.

The goal is to create a record of how shorelines look today and to track future changes.

Organizers encourage people to post photos to social media and include the hashtag #kingtides. Those who do are contributing to a larger database of imagery that helps people understand how sea level rise will impact their lives.

Localized flooding on the northern end of Longboat Key during a 2018 king tide. (photo by: Sarasota Bay Estuary Program)

“Our seas are rising in this area and king tides give us a glimpse into where that might be happening,” she said. “I kind of think about king tides as normal tides on steroids, so they’re very extreme on both ends. You have higher high tides than normal and lower low tides than normal.”

Quigley says to participate, people should take photos of both the high and low tides Thursday and Friday. The data will be shared with the King Tides Project, an international initiative.

King tides don’t cause sea level rise but they do offer a glimpse into life with higher seas. Many low-lying areas already experience localized flooding with higher tides. Average daily water levels are rising along with the oceans. As a result, high tides are reaching higher and extending further inland than in the past.

According to The National Ocean Service, high tide flooding has increased in the U.S. on average by about 50 percent since 20 years ago and 100 percent since 30 years ago. The events cause public inconveniences, such as frequent road closures, overwhelmed storm drains and compromised infrastructure.

“And that actually coincides with data that we’ve been seeing,” she said. “There is a tidal gauge in St. Petersburg that’s been measuring tides since about the 1940’s and that has seen an eight-inch increase in the sea level since that time.”