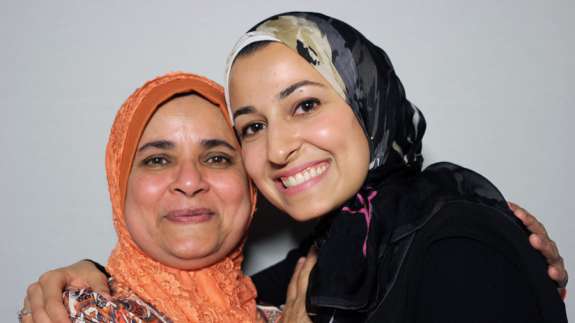 Yusor Abu-Salha was one of the victims in Tuesday's shooting in Chapel Hill, N.C. She sat down with her teacher, Mussarut Jabeen, at StoryCorps last May.

Yusor Abu-Salha was one of the young students killed in Tuesday’s shooting in Chapel Hill, N.C.

She and her former third grade teacher, Mussarut Jabeen, spoke to StoryCorps in May. In fact, all three victims in the shooting — Abu-Salha, 21, her husband, Deah Barakat, 23, and her sister, Razan Abu-Salha, 19 — attended the Al-Iman School in Raleigh, N.C., where Jabeen taught.

Jabeen returned to StoryCorps Wednesday to talk about that 2014 conversation with Abu-Salha.

“She was the first one to come to my mind,” said the 55-year-old Jabeen. “She was one student I would like everybody to know about.”

When she spoke to StoryCorps in May, Abu-Salha said she knew she stood out as a Muslim in America.

“Growing up in America has been such a blessing, and you know, although in some ways I do stand out, such as the hijab I wear on my head, the head covering,” Abu-Salha said, “there’s still so many ways that I feel so embedded in the fabric that is, you know, our culture. And that’s the beautiful thing here, is that it doesn’t matter where you come from. There’s so many different people from so many different places of different backgrounds and religions, but here we’re all one, one culture.”

Jabeen says she remembers when Abu-Salha was in third grade, “she had this sense of giving that really makes her different from other children.”

“I still remember, in third grade, when we asked for something, you used to say, ‘don’t put your hand like this,’ ” Abu-Salha recalled in May. “And you would have your hand facing downwards as if you’re taking something from someone.”

“And then you’d flip your hand over, and you’d open your hand upward as, you know, a giving gesture,” Abu-Salha said. “You know, be giving, open, compassionate.”

Jabeen told StoryCorps on Wednesday that “Deah, Yusor and Razan, these kids, their face was so radiant. They would just bring light to the room. And they treat me like their mother.”

Abu-Salha and Jabeen still kept in touch long after the third grade.

“I see you nowadays, and you’re always asking, ‘how are you?’ you know, ‘where are you now in life?’ ” Abu-Salha said. “And now I’m at NC State University.”

“And got married to one of my other student!” Jabeen said.

“I was so happy, when I saw you guys together,” Jabeen said. “You know, that these are the two kids that we taught, and you will be together for the rest of your life, inshallah.”

Jabeen remembers when Deah was growing up, he was getting so tall that he started to outgrow her.

“And because I’m a short person, he would stand behind me and put his hand over my head,” she said. “And I just told him, ‘Deah, you can never outgrow my heart.’ ”

Jabeen says she wants people to remember Abu-Salha as “a practicing Muslim, as a daughter, and above all as a good human being.”

Produced for Morning Edition by Liyna Anwar and Michael Garofalo.