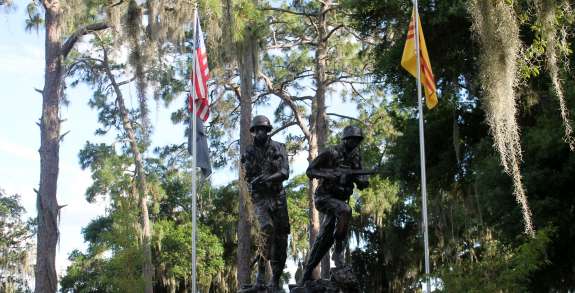 The central Florida Vietnamese community commemorated the 40th anniversary of the fall of Saigon – the capture of the South Vietnam capital that signaled the end of the Vietnam War.

Vietnamese-Americans dressed in traditional áo dài prayed for Vietnam, America and the soldiers that lost their lives in the Vietnam War.

Retired Air Force Colonel Joe Kittinger spoke at the event and reminded the crowd why he fought. “We knew what you wanted, what you needed and what you desired was freedom and democracy. And that’s what were there to help you acquire that,” he said.

Kittinger recognized many South Vietnamese fled the country after the war, some settling in Central Florida. “People that are here today at this celebration are people that had their home overtaken by communism. They’re the greatest Americans there are. They love this country,” he said.

Kittinger’s fighter plane was shot down in North Vietnam and held a prisoner of war for 11 months.