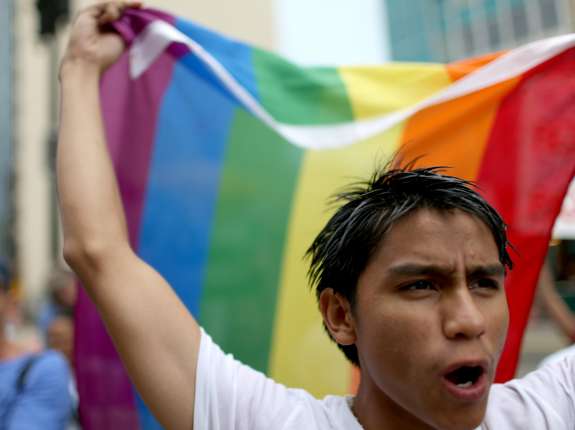 Florida is now 36th state where same-sex marriages are legal. Advocates like this man demonstrated in south Florida in July. Photo: Joe Raedle/Getty.

Donning crisp tuxedos and surrounded by friends and family, Michael Scott and his fiancé, Thomas Lawson, will walk down the aisle this evening and say “I do.” The 27-year-olds were one of the first thirty couples to register for a marriage license in Osceola County. They started officially planning their ceremony three weeks ago. And unofficially a bit earlier.

“I’ve literally been planning since middle school for me. Now that it’s actually becoming a dream come true, it’s overwhelming and exciting, and we’re just going to make it happen,” Scott remembers.

Lawson says, “We would be together and we would be married with or without the marriage license. Now that said, I’m glad that Florida is on board now and recognizing the validity and the legitimacy of our relationship because that does mean something to us.”

The city of Orlando will hold a mass wedding this morning for forty-three couples. Orlando Mayor Dyer and city commissioners will officiate the ceremony.

Luis Martinez , director of multicultural affairs is helping organize the event and says,“This is a dream come true—not just for the mayor, but also for the whole community. It took a while, but it’s worth it.”

The Center, an LGBT advocacy group will also hold a mass wedding tonight. Some area churches are planning ceremonies in the coming weeks.

For Lawson, who’s marrying his fiancé this evening, it’s all a bit overwhelming.  He feels thankful to experience a life milestone that generations of same-sex couples before him could not.

“It has taken a lot of people’s hard work and time and effort and energy and a lot of hardship to bring marriage equality to our country and to Florida specifically,” he says.

The first same-sex couples to marry in Florida tied the knot in Miami Monday.