Canada’s Taking It Slow On Reopening Its Border To Travelers From The U.S. Here’s Why 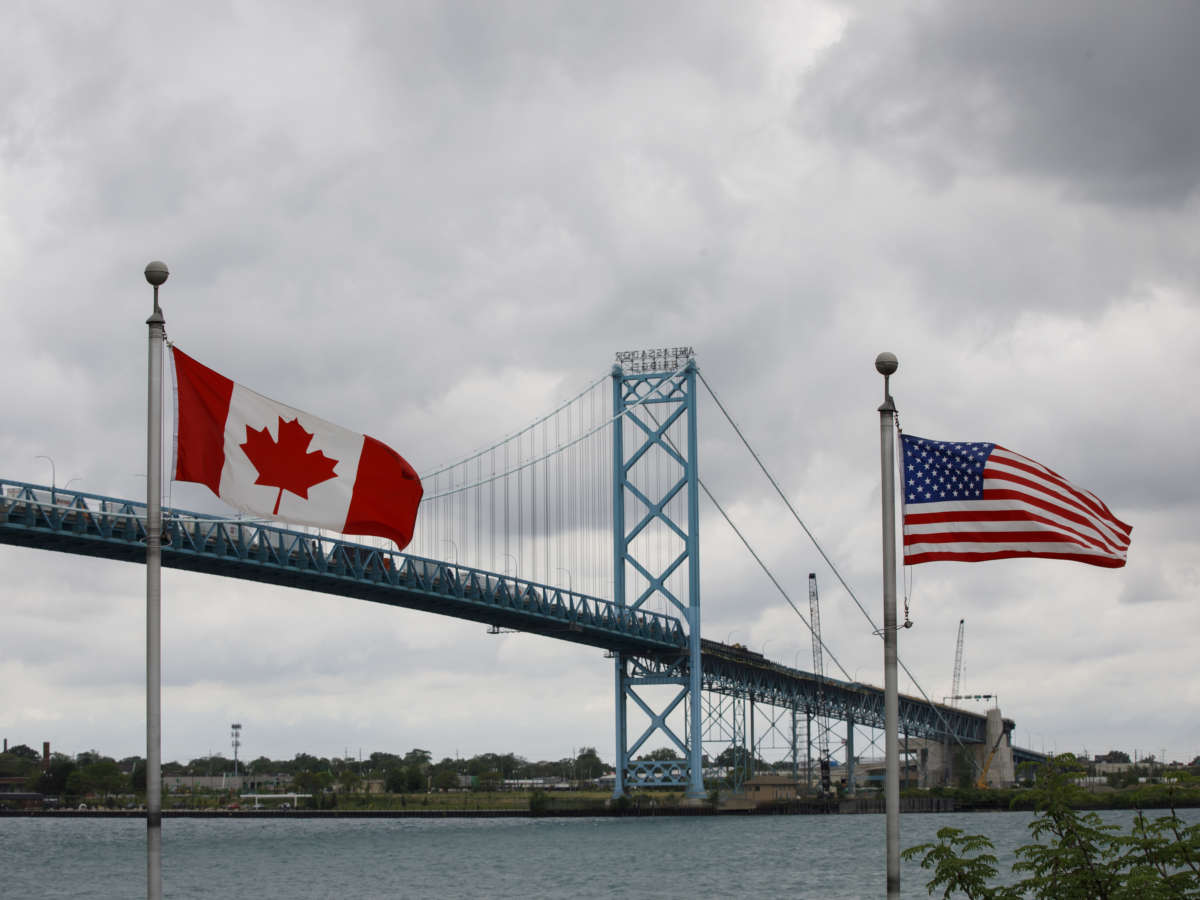 Canadian and American flags fly near the Ambassador Bridge connecting Canada to the U.S. in Windsor, Ontario, in May. Half of respondents in a poll of Canadians this month by Nanos Research said restrictions on travel across the U.S.-Canada border should not be eliminated until this fall or next year.
Image credit: Cole Burston

MONTREAL — For the past 30 years, Carol Anniuk has provided accommodation and guides for recreational fishing trips in northwestern Ontario. In normal times, 99% of her clients are American. But more than 15 months after Canada’s restrictions on nonessential travel went into effect to slow the spread of COVID-19, Anniuk, the owner of Young’s Wilderness Camp, doesn’t know when her U.S. clients will be able to cross the border.

“I’m just frustrated,” she sighs. Anniuk has taken on a lot of debt since the coronavirus pandemic began in her tourism-dependent area, a six-hour drive from Minneapolis. She bemoans “the lack of communication and the lack of a plan” from the Canadian government on when to begin admitting most visitors from the United States.

Canadians can fly to the U.S. but can’t cross by land, and most non-Canadians cannot enter Canada either by land or by air. The two countries continue to extend their travel measures — which are not the same in both directions — month by month.

In the latest step, which began July 5, the Canadian government lifted a mandatory 14-day quarantine for fully vaccinated Canadians and permanent residents returning to Canada. However, federal ministers have resisted providing a timeline or clear benchmarks for next steps in admitting more visitors.

Canadian Minister of Health Patty Hajdu warned in late June that with the delta variant “posing some significant challenges” in countries such as the U.K., “we need to be very cautious.” The delta variant already makes up more than 70% of new cases in the province of Ontario, which includes Toronto, Canada’s largest city.

“We need to reduce infections because we don’t know what long COVID does,” says Kelley Lee of Simon Fraser University in Vancouver, British Columbia, who leads a pandemics and borders research group. That group is advocating for tougher quarantine rules in Canada, raising the specter of new shutdowns. But other experts suggest that such severe moves are unlikely.

Windsor Mayor Drew Dilkens, in southern Ontario, says Canada should quickly ease restrictions for fully vaccinated travelers. Dilkens can see the Detroit skyline, a mile and a half away, from his window in City Hall. His brother lives in Michigan, but he says they haven’t seen each other in a long time.

“The impact of the border closure really is amplified in border cities,” he says.

As vaccination rates tick up, travel restrictions that made sense earlier in the pandemic have begun to grate on his constituents. Three-quarters of eligible Canadians have now received at least one dose of a COVID-19 vaccine, a higher percentage than in the U.S., and more than 40% are fully vaccinated.

“Those who are separated … need to reunite for funerals, for births of the first grandchild, for all sorts of life events that happen,” Dilkens says. “If you’re fully vaccinated now, it’s becoming less acceptable to have the border closed for fully vaccinated people.”

Since the start of the pandemic, the U.S. and Canada have allowed essential travel — including medical personnel and trucking — to continue, notes University of Toronto economist Ambarish Chandra.

“There’s something like 15,000 trucks that enter Canada every day from the United States. These trucks carry everything we need: our food and medical supplies, our raw materials,” Chandra says.

Throughout the pandemic, Dilkens says, 1,200 Canadian health care workers have continued to commute regularly from Windsor to jobs in Detroit.

Chandra and others argue that this travel makes it virtually impossible for Canada to exclude variants once they reach the United States. While the overall U.S. coronavirus infection rate was much higher than Canada’s earlier in the pandemic, Chandra points out that the rates have looked more similar since the spring, particularly in border states that normally send the greatest number of travelers to Canada.

“It’s easy for governments to fall back on saying, ‘All right, let’s hunker down, let’s close down the borders,’ ” Chandra says, “and sort of suggest that’s contributed to keeping us safer. … To a large extent, it’s not any longer.”

“I understand why people feel that way,” says Sumon Chakrabarti, a physician in Ontario. “You don’t want to just open up the floodgates.”

But, he says, Canada has reached a phase in the pandemic that allows for serious consideration of the trade-offs of border policies. “Because so much of the population is protected,” Chakrabarti says, “we can now manage this at a medical level, rather than having to do this at a border level.”

Prime Minister Justin Trudeau indicated last week that vaccinated travelers will be admitted before those who are not vaccinated, but the government has said a full reopening could require 75% of Canadians — or more than 85% of the eligible population — to be fully vaccinated.

“The goal that has been set is extremely high,” says Nathan Stall, a geriatrician at Mount Sinai Hospital in Toronto. “We hope we get there, but we may never actually get there.”

“We’re all in this together”

Meanwhile, some Canadians have been making their own decisions about acceptable risk.

When Mayor Dilkens’ niece recently married in Michigan, his own mother was unwilling to miss the ceremony. She flew from Windsor to Toronto and then to Detroit — an eight-hour journey that ended less than an hour’s drive from where she’d started.

Decisions like that do not surprise Stall, though the policies that drive them merit reexamination, he believes.

In Canada, there’s a sense that “we’re all in this together,” he says. “I think there’s a huge hesitation to move ahead and allow certain members of society to move ahead and [be] able to have social privileges and freedoms that others don’t yet have.”

However, many Canadians who have been vaccinated the longest are older adults like his own patients. And, he warns, “We may be depriving them of limited remaining life moments, to have them wait for everyone else to have the opportunity to be vaccinated before we reopen settings to them based on vaccination status.”