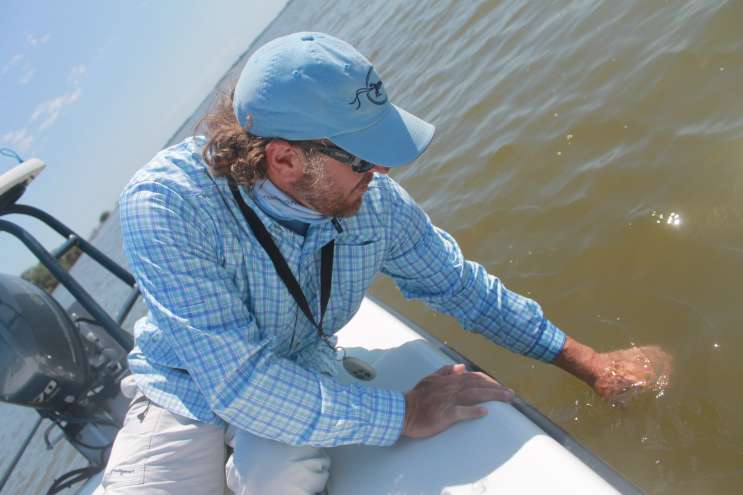 A little more than a month after an algal bloom triggered a massive fish kill in the Indian River Lagoon researchers from the Florida Institute of Technology say they have evidence of new blooms.

They sampled six locations over the weekend and say the blooms have started to flourish in the northern lagoon.

Rick Worman cuts the engine and takes up a long pole, propelling the boat like a Venetian gondola.

“So here’s a little stretch of shoreline by an island that normally you could pole down it. ”

Worman is a Merritt Island fishing guide. He searches visually for fish and stealthily pursues them using the pole. That’s why water clarity to him is so crucial.

“On an average day I could give my clients on just this little stretch of shoreline at least three or four shots at red fish or trout. So what I’ll do I’ll pole you down it, and we’ll see what we see.”

What we see is milk chocolate-colored water lapping the mangroves. Worman is disgusted.

Across the Banana River Worman points to large homes with lush lawns perched high on a hill.

“There’s almost no barrier between the homes and us as far as any kind of natural filtration or salt marsh or anything. It just flows right down across the road, and then it can flow right into the lagoon.”

At the heart of the Indian River Lagoon’s broken condition are nutrients like nitrogen and phosphorus found in fertilizers and organic waste. The nutrients function in the lagoon in the same way they do on lush lawns, feeding the algal blooms that transform the lagoon’s normally crystalline water into something locals describe as a brown tide.

Duane De Freese stands on a sandy shore in Sebastian, an hour’s-drive south of Merritt Island at the lagoon’s midsection. He oversees the Indian River Lagoon National Estuary Program.

“We know that we have eutrophication, which is a scientific term for too many nutrients from human sources in this lagoon. We see it in muck. We see it in storm water. We see it in our groundwater from both septic and fertilizer.”

The bloom gripping the northern lagoon barely has reached this far south, and the water here is pretty clear.

The blooms are composed of microscopic cells that discolor the water. A collapsing bloom this spring caused the fish kill by sucking all of the oxygen out of the water, suffocating the fish. A bloom of the same algal species combined with a super bloom of multiple species a few years ago destroyed more than half of the northern lagoon’s seagrass and led to a record number of dolphin deaths, along with die-offs of pelicans and manatees.

Fishing guide Rick Worman searches visually for fish and poles his boat like a Venetian gondola to sneak up on them. Photo by Amy Green

“The first battle really is to get nutrient load down to bring water quality and clarity back, and once we get that then we can begin to think about restoration of the system.”

Back in the Banana River Rick Worman dips his hand in the murky water. He describes the visibility as inches deep.

“I have no words to explain how I feel about this besides despair or heartbreak. I mean it’s just unbelievable. I love what I do. I love sharing time with people out on the water and showing them what this place was and hopefully still is.”

The lagoon’s future hinges on both elected officials and residents who live along its shores, whether new ordinances focused on fertilizer and septic tanks will be enacted and whether residents will follow the ones already in place.