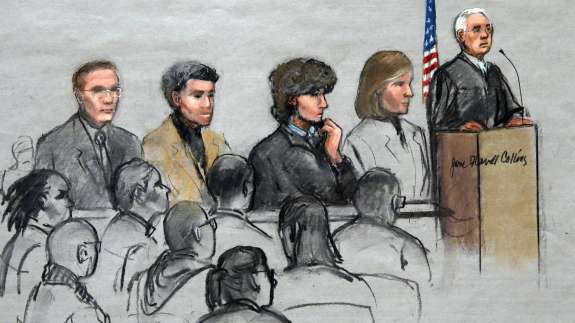 The 18 jurors (including 6 alternates) will hear and see what prosecutors say is irrefutable evidence that Tsarnaev, 21, should be sentenced to death for his role in the notorious twin bombings that killed three people and injured more than 260, as well as in the events that followed, in which a Massachusetts Institute of Technology police officer was also killed.

Tsarnaev faces 30 charges over those events in April of 2013. If he’s found guilty, he’ll be punished with either a death sentence or life in prison.

“Several of the 8 men and 10 women have said they already believe Tsarnaev is guilty, but insist they can keep an open mind, and decide the case based on the evidence at trial.

“Today, prosecutors begin to lay that out for them. They say they have heaps of video and photos, plus evidence he downloaded al Qaeda bomb making instructions, and they say Tsarnaev’s own message, left on the boat where he was hiding, shows his justification for the attack.

“Defense attorneys have indicated they may not challenge all the evidence, but will be focused on sentencing. They say Tsarnaev was coerced by his domineering older brother, who was the real mastermind of the attack. So, they say, Tsarnaev does not deserve the death penalty.”

The case is being tried in a federal court in Boston, under Judge George O’Toole Jr., despite several efforts by the defense team to move the trial.

WBUR also has details about the jury, which was selected from a pool of more than 1,300 potential jurors. They range from a college student to a former nurse, from a restaurant manager to a legal executive.