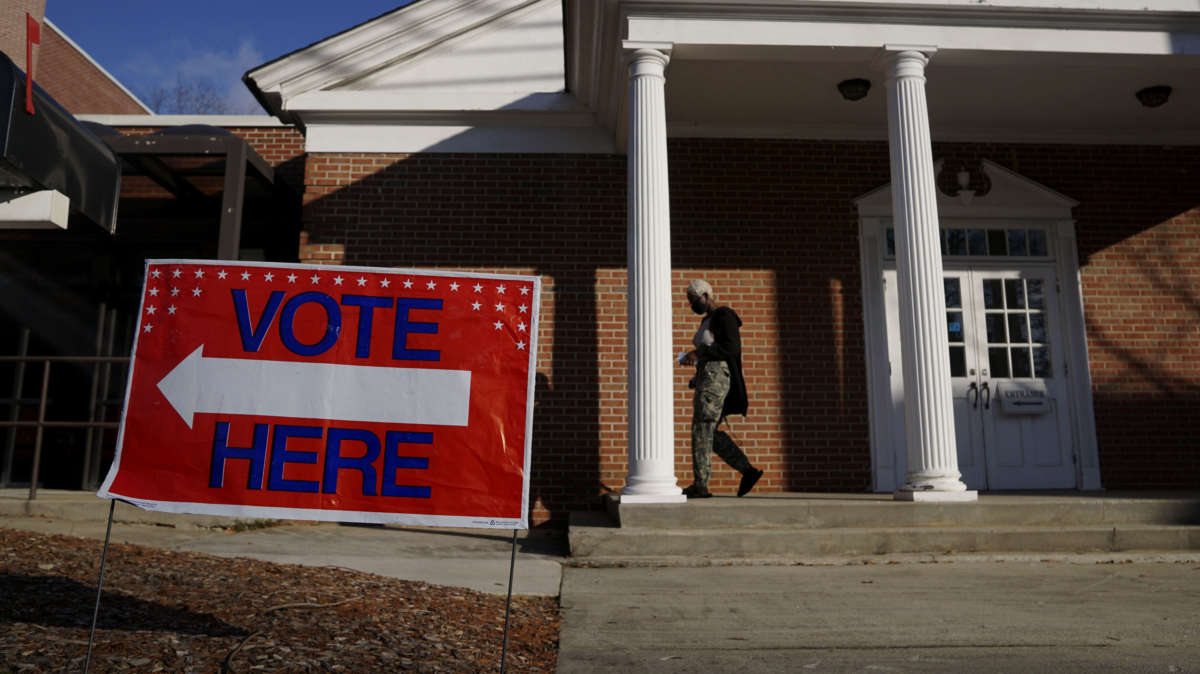 Voters enter a polling station at the Zion Baptist Church on Jan. 5 in Marietta, Ga. Black churches have often played a role in mobilizing their congregants to vote.
Image credit: Sandy Huffaker

One of the measures being considered in the Georgia legislature would limit early voting on Sundays in the state.

Sunday voting is especially important for congregants in Black churches, which regularly hold “souls to the polls” events after Sunday services.

“We gather in our churches on Sunday morning, you have morning worship and then after the service you get on the church buses, church vans, get in cars and people go to vote,” says Bishop Reginald T. Jackson of the Sixth Episcopal District of the African Methodist Episcopal Church. Jackson is the presiding prelate over more than 500 churches in Georgia.

“It’s a very effective way the Black church has of getting out our vote,” he tells Steve Inskeep on Morning Edition.

Georgia’s Republican-led House passed HB 531 earlier this month. One of its provisions would largely standardize voting across counties, limiting the ability of some counties to offer more days to vote.

Previously, churches could offer to take their members to the polls on multiple Sundays of early voting. Under the new proposal, early voting could at most happen on only one Sunday, with local officials picking whether that county’s weekend early voting happens on either a Saturday or Sunday. Backers of the change argue that it would bring more uniformity and less confusion to the state’s elections.

Black churches’ involvement in politics and voter mobilization goes back to the years after the Civil War. But they became a major force during the civil rights movement.

“Souls to the polls has a direct link back to Jim Crow when we were fighting for the right to vote,” says Christy Jackson, the supervisor of the Sixth Episcopal District who is also married to Bishop Jackson. “It became something that gave us comfort, to go in a group with our church group during those times to go and vote.”

In modern times, Christy Jackson tells Morning Edition, souls to the polls is for the larger community, not just for members of the church. “They might just be community members who get on the bus knowing that they have sort of a safe transport, if you will, to the polls.”

Churches are especially important for mobilizing African Americans in rural counties, Christy Jackson says. “There are some polling locations, voting locations that are 10, 15, 20 miles from where a person lives. And so these central located churches, for example, then become what we call neighborhood hubs.”

The bills in Georgia’s legislature that would increase barriers to voting are largely backed by Republicans.

A Republican criticism is that Black church leaders influence their members on how to vote. State Sen. Larry Walker earlier told NPR he’s concerned about “undue influence” on voters with other people helping to fill out ballots.

Reginald Jackson counters that “the goal is to get people to vote. You don’t tell them how to vote, but we are encouraging them to vote.” He says he’s not afraid to advise people if he’s asked. “That’s a common, ordinary thing,” he says — adding that it happens in white, heavily Republican, evangelical churches as well.

The bishop says that if the Sunday voting restrictions and other measures end up becoming law, African Americans will persevere.

“If you go back to early times of Jim Crow, even though they did everything to make it hard for us to vote, our ancestors still made every gallant effort. They cast their ballot. Blacks are resilient,” he says.

Christy Jackson adds that recounting the struggles of the past to young activists is essential. “You have to tell the story so that you can see the throughline to the other side.”