Biden’s Rallying Cry for Democratic Base Before Midterms Comes from His Midwestern Grandparents: “Spread the Faith” 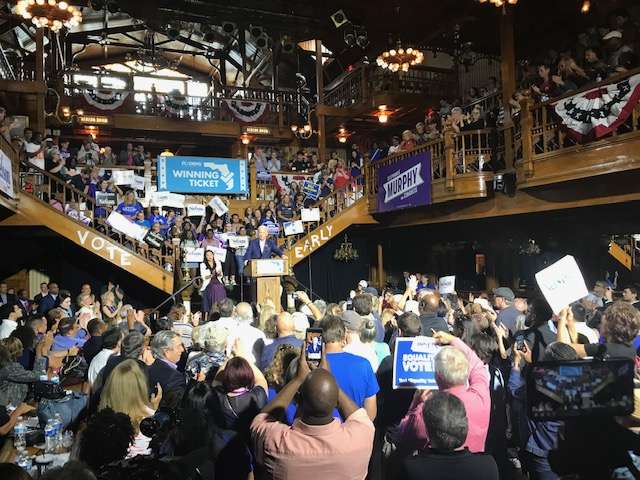 "Uncle Joe" as he was introduced spoke about voting for candidates who represent American values like hard work, perseverance, and tolerance. Photo: Danielle Prieur

Former Vice President Joe Biden says the midterm elections will determine the moral character of the country. Biden was in Orlando stumping for Democrats.

Biden rallied support at the Cheyenne Saloon for Democratic gubernatorial candidate Andrew Gillum and Democratic Senator Bill Nelson, who is running for re-election.

He ended the event with a story about his Pennsylvania grandparents. Whenever he left their house his grandfather would yell:

“Joey keep the faith. And my grandmother would yell, No Joey spread it. That’s what we need to do. Go out and spread it.”

Biden urged Democratic voters to turn out in November to help flip Republican control of the House and Senate.

He said Democratic leaders like Senator Bill Nelson had not only voted to protect the Affordable Care Act. He said gubernatorial-hopeful Andrew Gillum also wanted a statewide Medicaid expansion.

Congresswoman Stephanie Murphy was endorsed by Joe Biden at the event. She urged Democratic voters to turn out in November to reverse Republican control of Congress, especially after Senate Majority Leader Mitch McConnell and other Republicans called for cuts to social programs.

“You know what they said? It’s time to pay down Social Security and Medicare to pay down our debt. Unbelievable!”