Following Roe’s reversal, Biden calls it ‘a sad day’ for the court and the U.S. 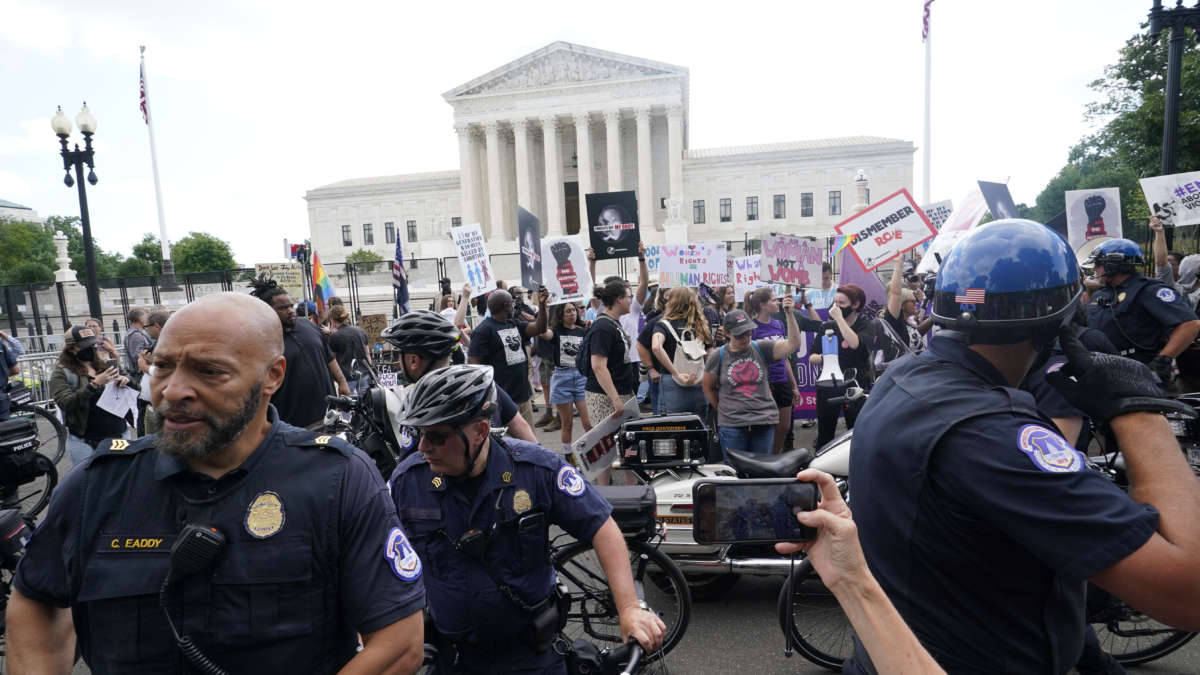 People protest about abortion on Friday outside the Supreme Court in Washington.
Image credit: Steve Helber

President Joe Biden has directed the Health and Human Services Department to take steps to make sure abortion and contraception medications are available “to the fullest extent possible,” and his administration plans to protect the right to travel to another state for an abortion, he following the Supreme Court’s overturning of Roe v. Wade.

“The health and life of women of our nation are now at risk,” Biden said. “Make no mistake. This decision is the culmination of a deliberate effort over decades to upset the balance of our law.”

Biden emphasized that this is the first time the court has revoked a constitutional right, calling it a “sad day for the court and for the country.”

“Voters need to make their voices heard,” Biden said, calling on them to elect candidates that will restore the right to an abortion at the congressional and local level. “This fall Roe is on the ballot. Personal freedoms are on the ballot. The right to privacy, liberty, equality, they’re all on the ballot.”

The president said he would look to use his power to protect the women in the states that may ban abortion and more announcements would come in the following weeks.

Biden said the decision was “cruel” particularly for women who become pregnant as a result of rape or incest. “It just stuns me,” he said.

He made clear that it would be up to Congress to restore abortion protections for federal law. “No executive actions … can do that,” he said.

Reaction to SCOTUS has been swift

Within minutes of the ruling’s release, Democratic congressional leaders put out statements admonishing voters to elect more Democrats while Republicans praised years of activism and pushed to go further.

Sen. Joe Manchin, D-W.V., called out two of the justices who joined the majority: “I trusted Justice Gorsuch and Justice Kavanaugh when they testified under oath that they also believed Roe v. Wade was settled legal precedent and I am alarmed they chose to reject the stability the ruling has provided for two generations of Americans.”

Democrats currently control Congress, but they are expected to lose those majorities in the November midterm elections, which would allow Republicans to pass legislation on abortion.

A visibly angry House Speaker Nancy Pelosi denounced the decision and vowed the issue would be a factor in the midterm elections.

Pelosi warned: “Be aware of this: the Republican are plotting a nationwide abortion ban. They cannot be allowed to have a majority in the Congress to do that, but that’s their goal.”

The parties have fought bitterly about abortion rights for years, and Friday’s statements highlighted the acrimony between them, as they traded accusations of “extremism” and being “radicals.”

Rep. Kevin McCarthy, the top Republican in the House, said on Twitter that “we must keep rejecting extreme policies that seek to allow late-term abortions and taxpayer dollars to fund these elective procedures. Much work remains to protect the most vulnerable among us.”

Senate Minority leader Mitch McConnell also called Democrats “extreme on abortion.” Saying that he shared in the joy anti-abortion activists were experiencing, McConnell called the decision is “an historic victory for the Constitution.”