Biden Wants To Go Tough On Wall Street. The Response? The Best Rally Since FDR 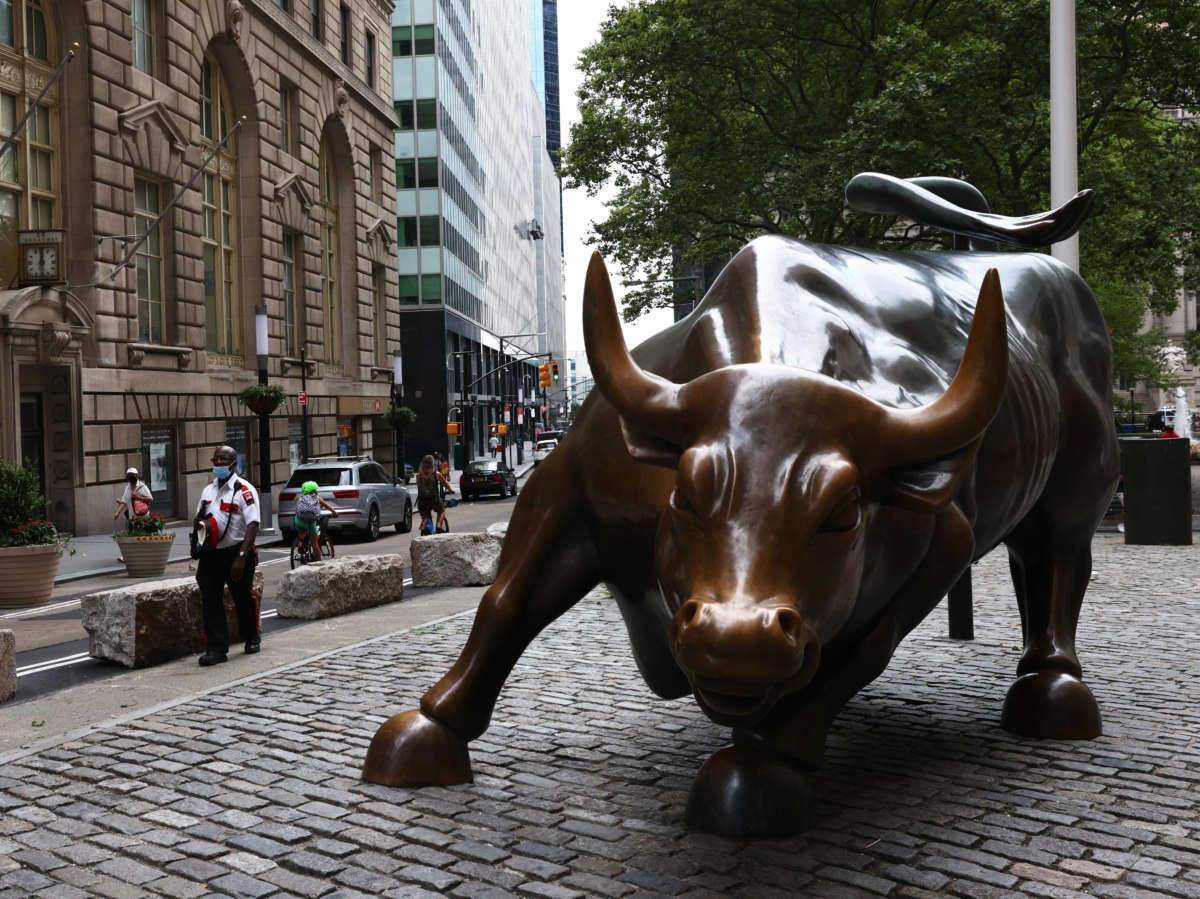 People walk near the Wall Street Charging Bull statue on July 23, 2020, in New York City. Stocks have rallied during President Biden's first 100 days even as he has promised to raise taxes on corporations and wealthy investors and to go tougher on Wall Street.
Image credit: Michael M. Santiago

President Biden wants to raise taxes on corporations and wealthy investors. His top market regulator has promised a tougher approach. And leading Democrats who control Congress are proud adversaries of moguls and money managers.

So, how has the stock market responded?

With a rally that has sent the S&P 500 to an 11% surge in Biden’s first 100 days, the best performance by the various versions of the index since Franklin Delano Roosevelt started his first term in 1933, according to an NPR analysis of S&P data.

“The stock market is on fire,” says Greg Valliere, Chief U.S. Policy Strategist at AGF Investments. “It has astonished veteran observers, and it may have a ways to go.”

So what explains the rally?

For many experts, it boils down to the U.S. economy.

President Biden’s administration has overseen a rapid rollout of vaccines and passed a $1.9 trillion stimulus plan that poured more money into households and businesses even after Congress had already passed trillions of dollars in stimulus.

Those two developments have led Americans to open their wallets again and businesses to reopen, turbocharging the U.S. economy.

Data on Thursday showed the economy grew at an annual 6.4% rate in the first quarter, while companies such as Apple and Tesla have recently posted blowout earnings.

Meanwhile, the Federal Reserve has committed to keeping interest rates low for the foreseeable future, and the central bank continues to buy billions of dollars worth of bonds, providing a powerful signal to investors.

“These last hundred days have been about as good as we’ve ever seen,” says Ryan Detrick, Chief Market Strategist at LPL Financial. “There’s the fiscal policy, the monetary policy, but the truth is, it comes down to the economy, and we have opened up, and that is a big reason why stocks have done so well.”

All this has helped to offset some of the president’s proposals that are less popular on Wall Street.

In his speech to a joint session on Wednesday, Biden unveiled a bold vision of big government that will require trillions of dollars in spending. He intends to pay for it by raising taxes on corporations and millionaires, including the rate wealthy investors pay on profits from the sale of assets such as stocks, as well as by closing loopholes.

“It’s time for corporate America and the wealthiest one percent of Americans to pay their fair share,” Biden said. “What I’ve proposed is fair. It’s fiscally responsible.”

Meanwhile, new Securities and Exchange Commission Chairman Gary Gensler is an experienced regulator who previously headed the Commodity Futures Trading Commission under President Obama and is known for a tougher approach to Wall Street.

And key committees that oversee the financial world are now overseen by lawmakers such as Sen. Sherrod Brown, D-Ohio, and Rep. Maxine Waters, D-Calif., who are widely seen as less friendly to Wall Street, while other progressive lawmakers such as Sens. Bernie Sanders, I-Vt., and Elizabeth Warren, D-Mass, are expected to have prominent voices.

But an economy that many experts see headed to its best annual growth since 1984 has a way of coloring things, according to experts. After all, investors recognize that a proposal – to change the tax code or raise taxes – still needs to pass a Congress where Democrats hold only a slim majority.

“Unless [Biden] did something insane, the table was set for this market,” says Jonathan Golub, Chief U.S. Equity Strategist and Head of Quantitative Research at Credit Suisse.

“I don’t see anything which changes this over the intermediate term,” he adds.

But there are more serious risks for Wall Street.

From the beginning of the pandemic, investors and economists have said the virus will determine how quickly the economy recovers. And despite the increasing vaccination rates, there is still concern about variants.

There’s also the prospect of rising inflation. Manufacturers are being hit hard by supply constraints, leading companies such as Proctor & Gamble and Kimberly-Clark to raise prices.

Meanwhile, the Fed has continued to insist an expected uptick in inflation will be manageable, but concerns remain the central bank may need to raise interest rates to counter the impact of rising prices.

And at the end, markets have always been cyclical. Sometimes they go up, and sometimes they go down. According to Golub at Credit Suisse, what ends up stopping the record-setting run in markets may be something as simple as time.

“You know, trees don’t grow to the sky,” he says. “Once we get past the second and third quarter of this year, things are going to progressively slow down back to normal.”