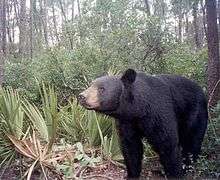 They will be on sale until the start of the seven-day season in October.

The permits are available online and at local tax collectors’ offices or retail license vendors. They cost $100 for residents and $300 for non-residents.

“That way you get the serious people who are going to take the good shots that are going to be serious about it, and not just somebody, oh, here’s $100. Let me go out there and shoot something.”

The hunt is aimed at reducing the state’s growing bear population that has become a nuisance in many neighborhoods. Bears were removed from Florida’s threatened list in 2012.

There’s no limit on the number of permits available. Instead the Florida Fish and Wildlife Conservation Commission will end the hunt early as it reaches its goal of 320 bears.