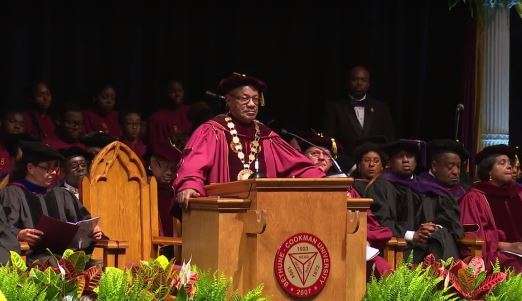 The president of Bethune-Cookman University has resigned amid criticism about how he handled the historically black university’s finances and reputation. The Daytona Beach News Journal first reported the announcement Tuesday from the school’s board chairman.

Jackson, who was first appointed interim president, served fewer than two years. In that time, he drew sharp criticism for driving the school into mounting debt over new dorms and for welcoming U.S. Education Secretary Betsy DeVos to speak at commencement after she had made a controversial comment about how historically black colleges were started.

“You’re carrying the weight of multi-million dollar institutions. You are responsible for making sure the decisions that come across your desk do not infringe upon the lifelong sustainability of the university,” said B-CU alumnus Terrance Cribbs-Lorrant.

He started a petition in April to oust Edison, accusing him of causing “unwarranted hostility among students and alumni” mismanaging endowment funds. The petition received more than 1,300 signatures.

“We were moving forward and his job, as president, in the two years he was given, were to take the university forward, and that isn’t what happened,” Cribbs-Lorrant added.

It is unclear who will replace Edison as B-CU’s new president and who will be selected in the interim period.