As Israelis Flock To UAE, They See A New Precedent: Peace Deals Without Giving Ground 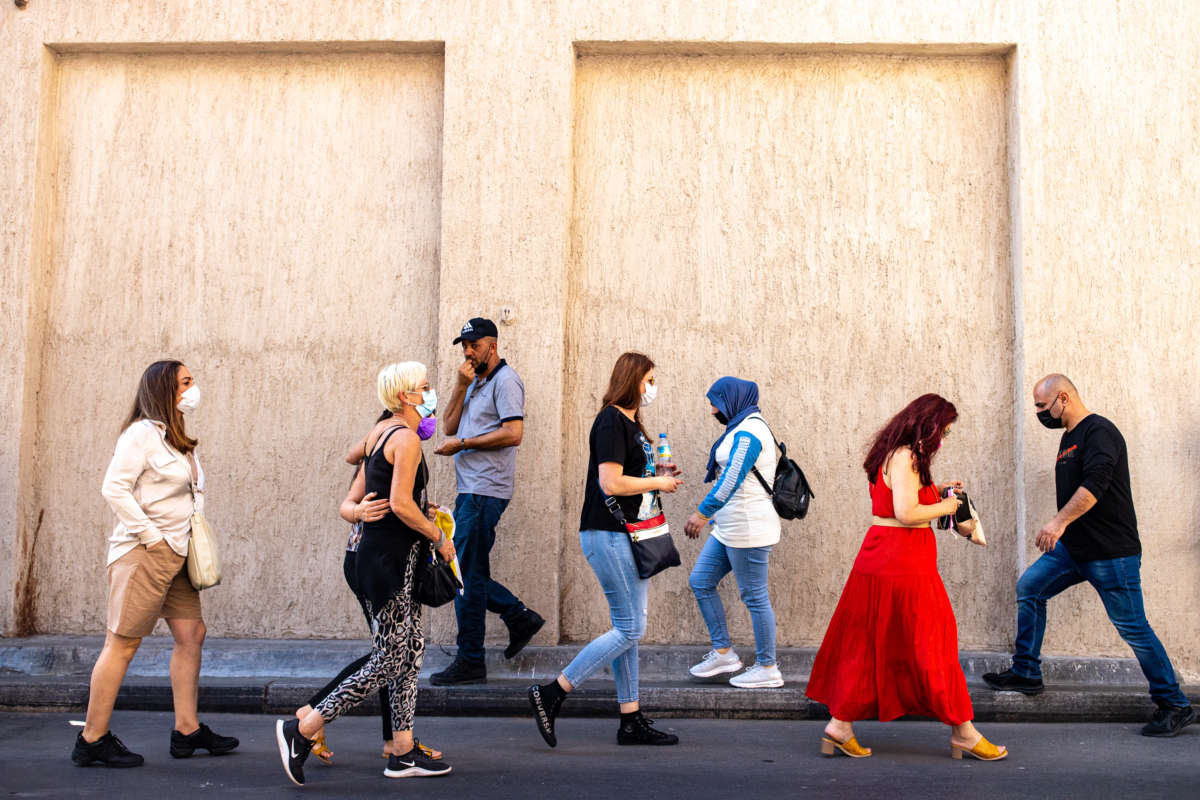 Israeli tourists walk through the Deira district near Dubai's grand souk in December.

Israelis are visiting Dubai in the tens of thousands. Where in the past, they could only arrive as undercover spies, competitive athletes or foreign passport holders, now they are loud and proud, running into the arms of their new Middle Eastern friend, the oil-rich United Arab Emirates.

Since December, they have window-shopped among elaborate displays of gilded wedding garments, skied down the indoor slope at Dubai’s Mall of the Emirates and boasted of their meetings with Emirati businessmen.

“We Israelis are very noisy, and they understand us … Here I feel good!” bellowed tour guide Lihi Ziv, wearing a sequined shirt and a blue scarf around her strawberry-red hair, seeing no reason to maintain a low profile as she wandered Dubai’s gold market last month.

“We are wanted,” said elementary school teacher Ilanit Zighelboim, as she toured the nearby spice market with friends.

Israel and the United Arab Emirates have promoted their U.S.-brokered deal for diplomatic relations as an historic peace deal, after decades in which Israel was isolated from many Arab nations. It’s the bear-hug that Israelis have always wanted from their Arab neighbors, leading many Israelis to redefine the very notion of peace and reconsider whether they need make any painful sacrifices to achieve it.

This new view is inspired by an alternative peace doctrine their conservative Prime Minister Benjamin Netanyahu has promoted: “peace for peace,” a rejection of the traditional paradigm of land for peace. He says the UAE deal sets a precedent: Israel doesn’t need to cede captured land to the Palestinians in order to win friends in the Arab world.

“This is what peace for peace looks like!” Netanyahu has tweeted nearly a dozen times — including when the first Israeli commercial jet carrying tourists landed in Dubai last month, and when Abu Dhabi’s government investment fund announced it would open an office in Israel.

Emiratis have won over Israelis with gestures including a display of Israeli produce in a Dubai supermarket and an Emirati businessman’s offer to buy 50% of a major Israeli soccer team.

The detente reveals a realpolitik in the Persian Gulf, where a new generation of Arabs is less consumed by the never-ending Israeli-Palestinian conflict, more willing to partner with Israel over common concerns like Iran, more interested in gleaning Israeli technological know-how and more keen on strengthening their own standing by aligning with the U.S.’ closest Mideast ally.

Bahrain, Sudan and Morocco have also normalized ties with Israel. In the cases of Morocco and Sudan, it was the U.S. and not Israel that offered incentives. Washington recognized Moroccan sovereignty over the disputed Western Sahara and removed Sudan from the U.S. government’s terrorism sponsors list. And in the Trump administration’s final days, it designated Bahrain and the UAE as “major security partners” of the U.S.

Israelis and Emiratis also see their new relationship as transactional. The Emiratis got U.S. approval — which would not have come if Israel had not removed its previous objections — to purchase American-made F-35 stealth fighter jets, while Israel got the U.S. to provide advanced military hardware to maintain Israel’s military edge in the Mideast and gained new trade opportunities with a lucrative market.

“Is that not peace?” Israeli investor Simcha Fulda said at a hotel in Dubai, after he held business meetings with Emirati investors. “This is a model of how the peace needs to be with the Palestinians. Mutual respect and acceptance … looking forward to doing business together and living together.”

What makes the friendship easier is that Israelis and Emiratis have never met on the battlefield, unlike the decades of deadly conflict Israel has had with the Palestinians and neighboring Arab nations.

Breaking the Arab boycott of Israel remains controversial in the region. The UAE government expects fealty from its residents and has low tolerance for criticism of its policies. There is a large Palestinian community living and working in the UAE, but those contacted by NPR declined to comment on the Israel deal, fearing repercussions.

Not wishing to be seen as selling out the Palestinians, Emiratis say the lovefest Israelis feel is only the honeymoon; tough love will come later.

They describe their embrace as a strategic attempt to soften Israelis’ defensiveness in a hostile region, encourage a spirit of compromise with Palestinians, and eventually persuade Israel to cede land to create a Palestinian state. Israel already agreed to suspend its West Bank annexation plans in exchange for relations with the UAE.

“A plant in the desert will grow thorns because of the lack of water,” said Mohammed Baharoon of the Emirati think tank B’Huth. “Change the ecosystem, they will change.”

But a prominent Israeli advocate for peace with the Palestinians recently returned from a trip to Dubai with a hardened outlook: it is the Palestinians who must change, he said, not the Israelis.

“I think that the Palestinians need to rethink the way they treat Israel,” said Chemi Peres, the son of the late Israeli President Shimon Peres, who won a Nobel Peace Prize for peace efforts with Palestinians.

Peres’ son runs the Peres Center for Peace and Innovation, which reaches out to Palestinians and other Arabs to foster cooperation with Israelis in sports, medicine and business. Now he is steering the center to prioritize Israeli business ties with the Emiratis, an approach he wants Palestinians to adopt in forging peaceful ties with Israelis.

“Their point of view has been, let’s first solve the political issues and then we can start normalizing things and move forward. I believe those days are gone,” Peres said. “I believe that the only way for us to really, really achieve peace, comprehensive peace, and save the region from backwardness, is to focus on moving together forward.”

“Israel occupies our land. Israel continues to create settlements in our villages, destroys our houses…and yet it is we who have to treat Israel better? Who is it that should be doing what to whom? The occupied to the occupier?” said Nabil Shaath, advisor to Palestinian President Mahmoud Abbas.

Palestinians and many countries in Europe and the West say real peace requires Israel to agree to the “land for peace” formula — ceding the occupied West Bank to the Palestinians in order to end their conflict. Shaath worries the UAE deal removes the incentive for Israel to do so, even if the Emiratis say they’ll keep pushing for it.

“The Israelis are the problem, not us, and the Emiratis are looking for excuses for what they have done,” Shaath said.

Some Palestinians do find perks in the new UAE deal. Those who are citizens of Israel — not from the West Bank or Gaza — are finally able to visit a part of the Arab world that had been off limits to them as Israeli passport holders.

“It was a dream, an impossible dream,” said Lobna Zobedat, after sandboarding down a desert dune on the outskirts of Dubai, the city she’d always wished to visit.

She hoped Israeli Jewish travelers to Dubai would see their Arab compatriots in a more positive light. Could it lead to less discrimination against her community at home, Zobedat wondered — or would it all just be forgotten on the flight back?

These questions lingered on a Dubai runway last month, as commotion broke out while an Israeli flight readied to depart for Tel Aviv.

Lihi Ziv, the tour guide, protested when a flight attendant tried to fill the empty row in front of her with a couple and their baby, Arab tourists from Israel. Another Arab couple called Ziv racist. Ziv insisted her concern had only to do with the coronavirus pandemic.

“Respect each other!” an Israeli flight attendant commanded. Passengers applauded.

“You all were just in an Arab country, not in Las Vegas,” a young Arab dad said in Hebrew. “Look at what is happening here. Disgusting.”

The quarreling passengers did not make amends or apologies. Forced to sit together, they spent the 3 1/2-hour flight back to Israel in a cold peace — and went their separate ways.