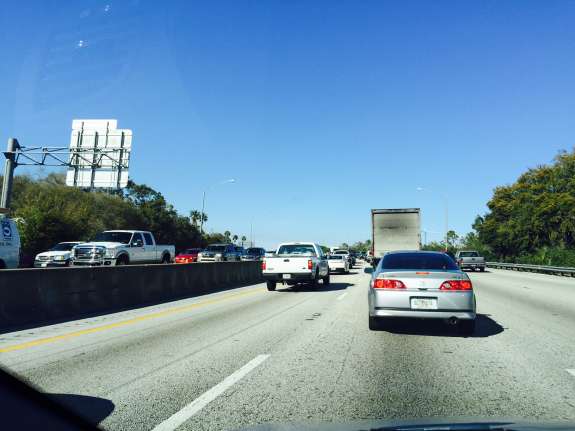 By this summer, drivers will be navigating miles of orange barrels and concrete barriers as construction on the massive overhaul of I-4 gears up. Just anticipating the backups has drivers groaning about their commute.

“Horrible, miserable and a lot of angry drivers,” says one driver Lisa Martinez.  She thinks there will be road rage as the construction drags on.

Jose Acosta worries about how drivers will navigate around it all. “I didn’t think it could get worse, it’s going to affect too many people.”

It will affect a lot of people, an estimated 200-thousand drivers travel that stretch of the interstate every day. And the I-4 Ultimate is ginormous. 21-miles, 56 new bridges, 140 bridges getting a makeover, 15 major interchanges getting a face lift, fly over ramps, expanded side roads, and four toll lanes.

“My boys, who don’t really know I-4 today, they will never know the I-4 that I know. They will only know this new and improved interstate,” said Project manager Loreen Bobo. Managers like her have been working and thinking about making over I-4 since the late 90’s.

They’ve broken it down into four segments: around the attractions, downtown, the Ivanhoe area and the Altamonte area. To wrap construction in six years, crews will work on all four segments at once. Bobo acknowledges that it will be painful, but worth it. “Let’s just get it done, pull off that band aid,” she said.

To commuters worried about bottlenecks, she promises the same number of lanes will be open most of the time, but drivers will need to stay on their toes because traffic patterns will shift from one day to the next. She’ll know how it’s going because I-4 is part of her commute too.

“As an engineer you can’t help but pay attention to the, what we call the maintenance of traffic, the barrels. I try to put on my every day person glasses while I’m driving through. I know what our intent was, but is that what I’m really seeing,” said Bobo.

Traffic isn’t the only thing commuters are complaining about. There will also be four toll lanes running down the middle of I-4. The toll price will go up as more drivers merge on. The goal is to constantly maintain a sweet spot where there are just enough drivers – but not too many – to make sure traffic is always flowing at around 50 miles per hour.

The toll lanes are mockingly called Lexus Lanes, for their costly tolls, which Bobo says could reach $15. For some drivers, paying more will be worth it. Bobo thinks about when she’d be willing to pay the toll to zoom past traffic during the afternoon crunch. She has two boys in daycare. “Every minute I’m late it’s $2 a minute, five minutes late, it’s $20. If I’m running late from work in a meeting I might make a decision that day that it’s worth to get into the express lanes and pay $4 or 5 dollars and pay to get to where I need to go because it’s less than the $20 if I’m late,” she said.

To guide drivers onto the toll lanes, Bobo say there will be spires marking the way. “You can see up ahead, ‘oh, okay traffic is starting to back up, I can see some spires up ahead maybe I’ll look into getting into those lanes.'”

But before we start talking about that, she says let’s first get through the next six years.