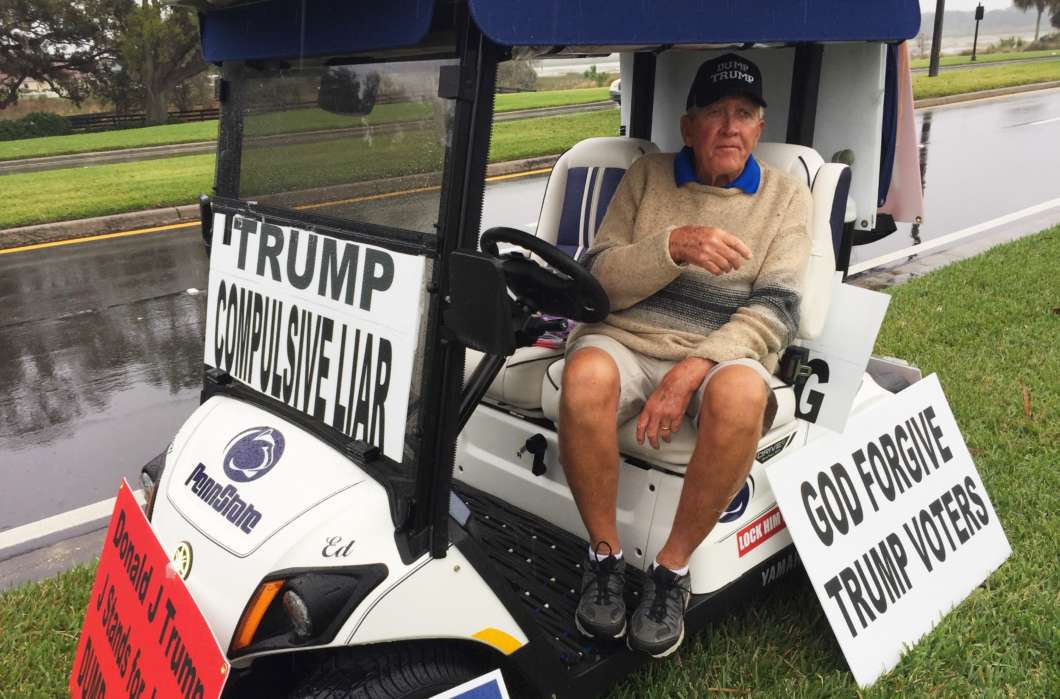 Until recently, Ed McGinty says, he was just a crazy old man with a sign.

Now the 71-year-old Democrat is something of a political sensation and a rallying point for opponents of President Donald Trump in The Villages, a largely Republican retirement community in Central Florida.

On a recent Friday, McGinty has parked his golf cart in a light rain next to Morse Boulevard, a busy thoroughfare. The 71-year-old has surrounded himself with anti-Trump placards.

His signs call the president a compulsive liar, dumb as a rock, and worse.

His protests have attracted television coverage and an article in the Washington Post.

“But before that I was just sitting out here alongside the road or in Sumter Landing or Brownwood,” McGinty said, “and my signs on my cart and, you know, people would pretty much say yea or nay, or some of them thought I was crazy and my wife thought I was losing it.”

That all changed after the Washington Post article came out.

He’s gotten things like stickers and anti-Trump shirts – and a basket of food from his home city of Philadelphia.

As McGinty talks, motorists honk their horns or give him a thumbs-up. Others show disapproval. A golf cart driver yells a profanity, and McGinty returns the insult.

The retired real estate broker is relatively new to politics. He prides himself on standing up to opposition and giving as good as he gets.

“People going by, giving me a thumbs-up and beeping their horns at me,” McGinty said. “Other people going by and showing me the middle finger on their hand. But that’s to be expected, you know.”

McGinty has caused vigorous debate in the letters to the editor and pages of the Villages-News website. Some blast him for disrespecting the president. Others echo McGinty’s views or support his right to free speech.

In one video posted online, McGinty trades insults with a woman who objected to his calling Trump a sexual predator. She threatens to report him to the president. That video has since been pulled down.

When Trump visited The Villages last October, McGinty was there to protest. A video by Michael Connifey shows that vigorous debate in real time. People in the crowd chanting and trying to block his “Impeach Trump” sign.

Some of them hurl insults at him.

“He wants to kill babies,” one woman says.

Someone in the crowd tells McGinty he should be embarrassed.

“You have any idea how stupid you guys look?” a Trump supporter tells him. “You ought to be embarrassed.”

McGinty gets sarcastic in response: “Oh, I am embarrassed. Oh, God!”

Back on Morse Boulevard, one woman – a retiree from Syracuse – stops her cart to pose for a photo with him. She tells McGinty she had been a Republican until Trump came along.

“It’s very surprising, the people that were out on Buena Vista yesterday with me,” he said. “Democrats had pulled over, and I must have had, at one time, I must have had five other carts besides myself. And we were all just laughing and having a good time. And it was a nice afternoon.”

He has received a threatening note at his door, had his new Twitter account hacked and had the cops called out to his cart.

But of course, he is legally allowed to express his political views – even while many in The Villages strongly disagree.