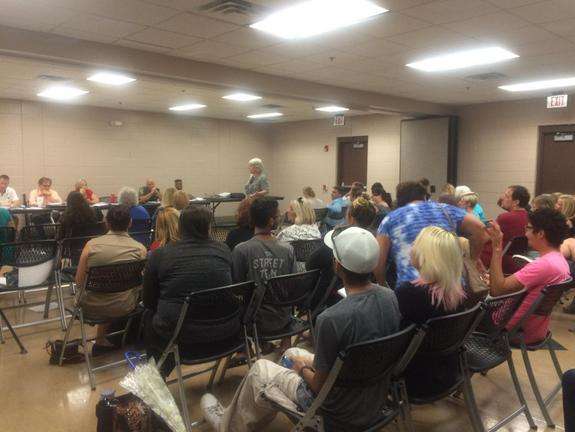 On July 23, law enforcement officers responded to a call about some dogs living in a yard in Winter Garden – all pit bulls, the dogs were chained to trees and kept in homemade pens and coops. According to affidavits and reports filed with the Orange County Clerk’s office, animal control officers and the Orange County Sheriff’s Department visited the property and found dogs with both fresh and healed wounds, a dog with a bloody mouth and dogs with scarring on their bodies. Some of the dogs did not have food or water. Some had stale bread in their cages.

Animal control officers found one dog to be suffering from infected wounds to his head and face that were so bad he had to be euthanized. Two men were arrested on felony animal cruelty charges on Aug. 14 in relation to the dog’s injuries. Yet all of the other dogs were left behind on the property – much to the frustration and anger of animal-welfare advocates who filled a room on Aug. 18 to ask the Orange County Animal Services Advisory Board for answers. They were disappointed to hear that neither Orange County Animal Services, nor the sheriff’s department, think they have enough evidence to remove the dogs.

Sgt. Al Giardiello, who works on agricultural crimes for the Orange County Sheriff’s Office that there was no evidence of dog-fighting or cruelty at the property. The remaining dogs were “in good physical health required no immediate assistance.”

Animal care laws only require that people provide the basics – some food, some water, some shelter and occasional exercise. Other than that, you can care for your animals as you see fit.

“If there was an allegation of animal cruelty, and we found that to be of substance, we’d have had those dogs already,” Giardiello told the Weekly. “Our hands are tied.”