AG Lynch To LGBT Community: This Country Stands With You 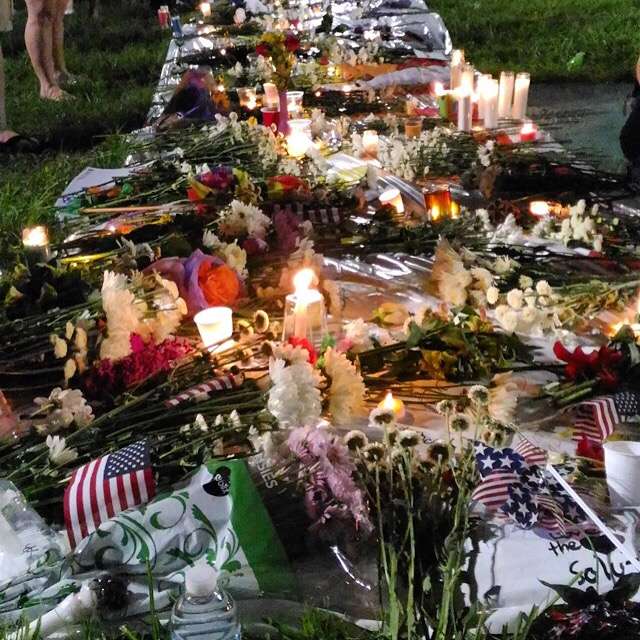 Attorney General Loretta Lynch told Orlando’s LGBT community that the country stands with them. Lynch made the remark during a visit Tuesday with victims’ families and first responders.

Lynch said the Justice Department will give the state $1 million to help local and state agencies cover costs associated with the shooting. Funding will also be available to help families of the victims, said Lynch.

On June 12th, 49 people were killed and 53 injured during the deadliest shooting in modern U.S. history. Lynch described her meeting with families as “difficult” and said she could not be more proud of the Orlando community. “Now there is no doubt that this was a shattering attack: on our nation, on our people, and on our most fundamental ideals,” said Lynch.

The FBI released a transcript of the gunman’s 911 call on Monday, and Lynch said the Justice Department is open to releasing the audio. “Over the course of time, we are certainly open to that, I can’t tell you when or in what context, but I can tell you we are open to that.”

Lynch said investigators are looking back at their contact with the gunman. The FBI investigated him in 2013 and 2014.

“Good afternoon, everyone and thank you all for being here. I am here in Orlando today to meet with our investigators and state and local partners on the ground; to support the people of this great city and all those who have been affected by this devastating tragedy; and to reaffirm this administration’s unshakeable commitment to the safety of our citizens, the security of our nation and the strength of our values.

Earlier today, I met with U.S. Attorney [Lee] Bentley and his staff, who are helping to coordinate the Justice Department’s participation in the ongoing investigation, which includes my colleagues at the FBI, ATF, the National Security Division and U.S. Attorney’s Offices in Florida. I’ve visited with some of the family members of those lost and wounded in this attack. This afternoon, I will meet with state and local law enforcement and first responders. I could not be more proud of all the members of the Orlando community that I’ve encountered today – and I’ve made clear that the Department of Justice stands with them.

We’re doing that in a number of ways. We are providing assistance to first responders and law enforcement officers as they aid in the investigation of this heinous crime. The Department of Justice is making $1 million in emergency funding available to the Florida Department of Law Enforcement. The state will be able to apply for funds on behalf of Orlando and other affected jurisdictions to cover overtime costs for state and local responders. We will move quickly to make the award as soon as possible. And we are offering emergency counseling resources to first responders to help them deal with the trauma that they too have experienced. Because in their bravery, they shoulder the dangers visited upon us and carry that weight long after the smoke has cleared. We will continue to make any and all resources available to them as this investigation unfolds.

The Department of Justice is also determined to do anything we can to help this community heal, recover and become whole again. Our Office for Victims of Crime and the FBI Office for Victim Assistance have already worked with local, state and federal officials and community groups to set up a Family Assistance Center. Service providers are on the ground providing crisis counseling and other critical support and we’re making federal emergency funds and victim compensation funding available to cover family travel expenses, medical and mental health expenses and other costs related to the tragedy. We also have experts in crisis response on the scene to help with both short and long term planning to meet the needs of victims and the community.

There is no doubt that this was a shattering attack – on our nation, on our people and on our most fundamental ideals. But the message of Orlando goes far beyond one night of unspeakable terror. The message of Orlando that I have seen today – and what the American people have seen in the wake of this horrific assault – is a message of determination to remove hatred and intolerance from our midst; to live our lives freely and without fear; and to stay true to the principles of liberty, justice and equality that define America at our best. I am proud of the way that federal, state and local law enforcement officers and first responders have gone above and beyond the call of duty. I am inspired by the strength and the resilience of the survivors and their loved ones. And I am deeply moved by the way that this community – and our national community – has stood together in support of one another, in defiance of terror and in defense of our most cherished ideals.

Those ideals include the understanding that our diversity makes us stronger – and that no matter who we are, what we look like, where we come from, or whom we love, this extraordinary nation belongs to us all. I know that the LGBT community in particular has been shaken by this attack. It is indeed a cruel irony that a community defined almost exclusively by whom they love is so often a target of hate.

Let me say to our LGBT friends and family, particularly to anyone who might view this tragedy as an indication that their identities – their essential selves – might somehow be better left unexpressed or in the shadows: this Department of Justice – and your country – stands with you in the light. We stand with you to say that the good in the world far outweighs the evil; that our common humanity transcends our differences; and that our most effective response to terror and hatred is compassion, unity and love. We stand with you today as we grieve together. And long after the cameras are gone, we will continue to stand with you as we grow together, in commitment, in solidarity and in equality.

Once again, I want to thank my colleagues for their outstanding work over the last week. I want to express my gratitude for all that they and our partners on the ground have done and will continue to do to move our efforts forward. And I want to pledge the ongoing support of the Department of Justice and the Obama Administration as we work to ensure the safety and security of all Americans.”