Africa Is Running Out Of Oxygen 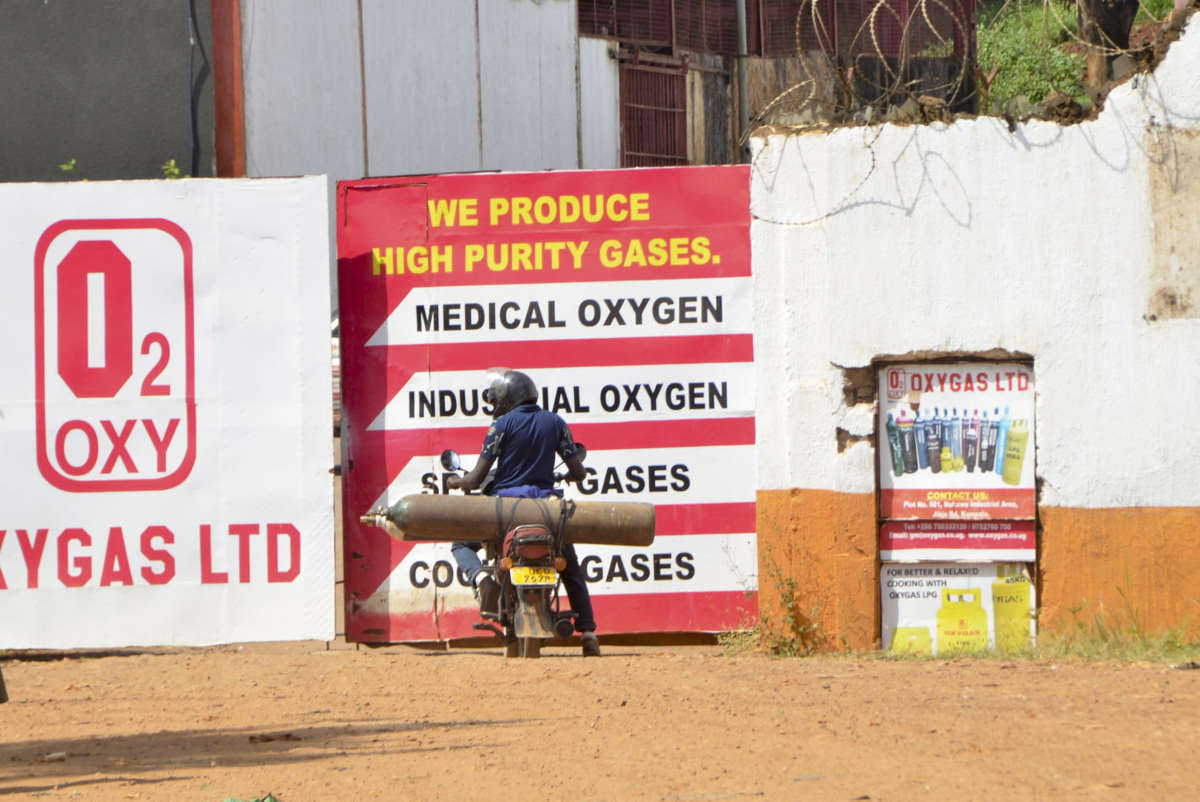 Hospital wards across Uganda are filling with COVID-19 patients as the country faces an aggressive surge in cases. One of the biggest issues have: a serious shortage of oxygen.

Over the last month, the number of daily reported infections has increased tenfold, showing no signs of letting up. Cases have jumped from less than 100 a day in mid-May to 1,584 on June 18th. “ICU bed capacity is now full, almost at 100%,” says Willy Tabu, a physician based in Kampala who helps coordinate Mercy Corps response to the pandemic.

And it’s not only beds that are a concern.Tabu says severely ill COVID patients need oxygen, but the supply just isn’t there.

Oxygen is being produced. Uganda’s 14 largest federal hospitals each have oxygen generating plants and they provide cylinders to smaller hospitals and clinics. But they are struggling to meet the increased demand. There’s also a shortage of cylinders to go around, says Tabu — meaning the oxygen plants have to ship the ones they have back and forth to be refilled, and that doesn’t happen quickly.

‘A Perfect Storm For Mass Fatality’

The numbers don’t look good. Uganda has the capacity to fill 3,000 oxygen cylinders per day. But if COVID hospitalizations continue to increase at the current rate, Tabu says, Uganda could need 25,000 cylinders a day in the next month.

“That is way beyond what the government, even the government with a supplementation of the private sector, can be able to produce,” Tabu says. “So that is how bad the situation looks now.”

This is in a country where less than 2% of the population has been immunized against COVID.

“If you don’t have oxygen and you don’t have a vaccine, this is like a perfect storm for mass fatality,” says Leith Greenslade, the coordinator of the Every Breath Counts Coalition, which addresses respiratory issues in low- and middle-income countries.

Oxygen Shortages Are A Problem Across Africa

Greenslade says inadequate supplies of oxygen have been a problem in many parts of the world during this pandemic but the shortages in Africa are acute. While countries like Brazil and India have industrial plants creating oxygen, much of Africa does not. Sierra Leone, for instance, has only two plants for the entire country,

“Prior to the pandemic, most of the hospitals in Africa were not properly equipped to deal with the needs of oxygen for non-COVID patients,” Greenslade says.

Severely ill COVID patients on the continent die at rates far higher than anywhere else in the world. A study of COVID mortality in 10 African nations, published last month in the British medical journal The Lancet, found that half of those admitted to intensive care units didn’t survive. It also found that only half of hospitalized COVID patients got access to high-flow oxygen, the most effective delivery system. The West African nation of Sierra Leone has only two functioning medical oxygen plants: one in the capital and one in a remote diamond mining district near the border with Guinea.

“You get about ten hours of high flow delivery to a patient for each of these cylinders,” says Douglass Miller, the infrastructure manager with Partners in Health assigned to the Koidu Government Hospital in northeastern Sierra Leone.

Standing outside the shipping container which houses the oxygen plant, Miller says the plant can fill 20 cylinders per day — not even enough to treat a dozen severely ill COVID patients. Fortunately, the hospital isn’t seeing an influx of coronavirus cases right now.

The neonatal intensive care unit at the hospital was built to care for 20 infants but often holds twice that many. So many of the babies need supplemental oxygen that the staff have set up splitters so that multiple infants can be hooked up to a single tank.

Next door in the maternity ward, the staff have been using oxygen to help stabilize a pregnant woman who has been having epileptic fits for the last five days.

“She’s had two previous pregnancies, but both babies have died. They were both stillborn,” says nurse-midwife Isata Dumbuya. Dumbuya is the head of reproductive and maternal health for Partners in Health in Sierra Leone. She says that this 29-year-old wasn’t getting enough oxygen to her brain in the midst of her seizures. If she hadn’t gotten supplemental oxygen she probably would have died several days ago, she says.

The pregnant woman finally seems to have turned a corner. She’s still drowsy but is finally talking somewhat coherently with Dumbuya for the first time. She’s asking for food as Dumbuya checks her vital signs.

“Everything’s normal,” Dumbuya says with a smile. Her oxygen saturation is back up to 98% after being in the 80’s a few days ago. “This is someone who was going to die yesterday.”

And of the keys to saving this woman and her baby was readily available bottled oxygen. Dumbuya this level of care is not the norm in maternity wards across much of the country.

If Sierra Leone does get hit by a significant surge in COVID cases and severely ill patients start filling hospital wards, the 20 cylinders of oxygen a day produced at this hospital will be in high demand. And that demand will be not just at Koidu General Hospital but at clinics throughout the region.