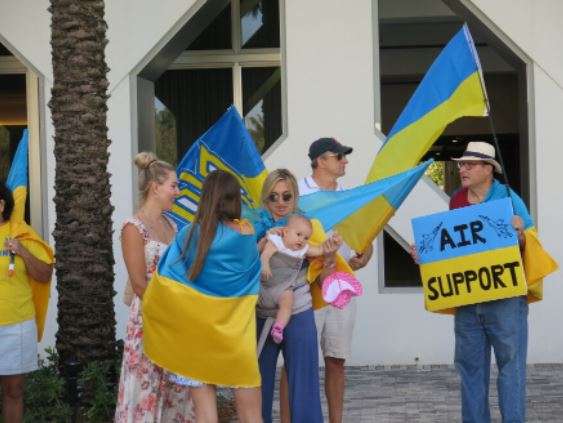 Supporters of Ukraine attend a rally in Sunny Isles, FL, in March 2022. (WUSF)

Participants were asked how they felt about vaccines, the government’s response to COVID-19, the U.S. response to Russia’s invasion of Ukraine and more.

Floridians are still divided politically, despite some agreement between Democrats and Republicans on key issues.

That’s according to researchers from the University of South Florida, who polled 600 people from around the state on the U.S. response to Russia’s invasion of Ukraine, presidential/gubernatorial job approval, and COVID-19.

Almost three-quarters of participants agreed with the U.S. providing military support to Ukraine, with similar levels of backing from Democrats (79% “strongly” or “somewhat” support), Republicans (75%), and independents (72%.)

However, when asked if they approved of President Joe Biden’s handling of the situation, 70 percent of Democrats did — while only 19 percent of Republicans said the same.

“You see this broad agreement on what should be done, but as soon as you introduce President Biden’s name into one of the questions, you get a very sharp partisan split,” said Stephen Neely, an associate professor in the USF School of Public Affairs.

“It’s a really interesting reminder of both how politicized our current moment is and how that affects responses to public opinion.”

An overwhelming majority (86%) said it is either “somewhat” or “very important” that the state of Florida divest its roughly $300 million in investments linked to Russia and Russian-based companies.
When it comes to jobs and Florida’s economy, more than half — 56% of those polled — “strongly” or “somewhat approve” of the job being done by Ron DeSantis.

Neely said this is good news for the governor as he runs for re-election this year.

“If I were in the DeSantis camp, I would be pretty pleased with where I’m at right now,” said Neely. “The governor has plurality support in most areas.”

In contrast, only 44% of respondents approve of President Joe Biden’s performance when it comes to the economy.

The economy also supplanted COVID-19 as the most important issue to Floridians.

About a third of those polled said the economy and jobs are the biggest concern to them, compared to nine percent who said COVID-19 is.

The survey also said 60% of the respondents were either “very” or “somewhat satisfied” with the way the state handled the pandemic. In addition, in comparing Florida’s response to COVID-19 to other states, 32% said Florida has done “as well” and 36% said the state did “better.”

Neely says that many things, including social and economic factors, played a part in that approval.

And a majority — 73% — said they were at least “somewhat confident” that the COVID-19 vaccines were safe, up from 68% in January 2021, when USF asked the same question.

Researchers surveyed a group of 600 adult Floridians representing the state’s demographics from March 31 through April 12, 2022, with a 95% confidence level and a margin of error of +/- 4.

USF will release a second survey later this week focusing on inflation, the housing market, and education policy.