A Race To Protect His Country — And His Mother 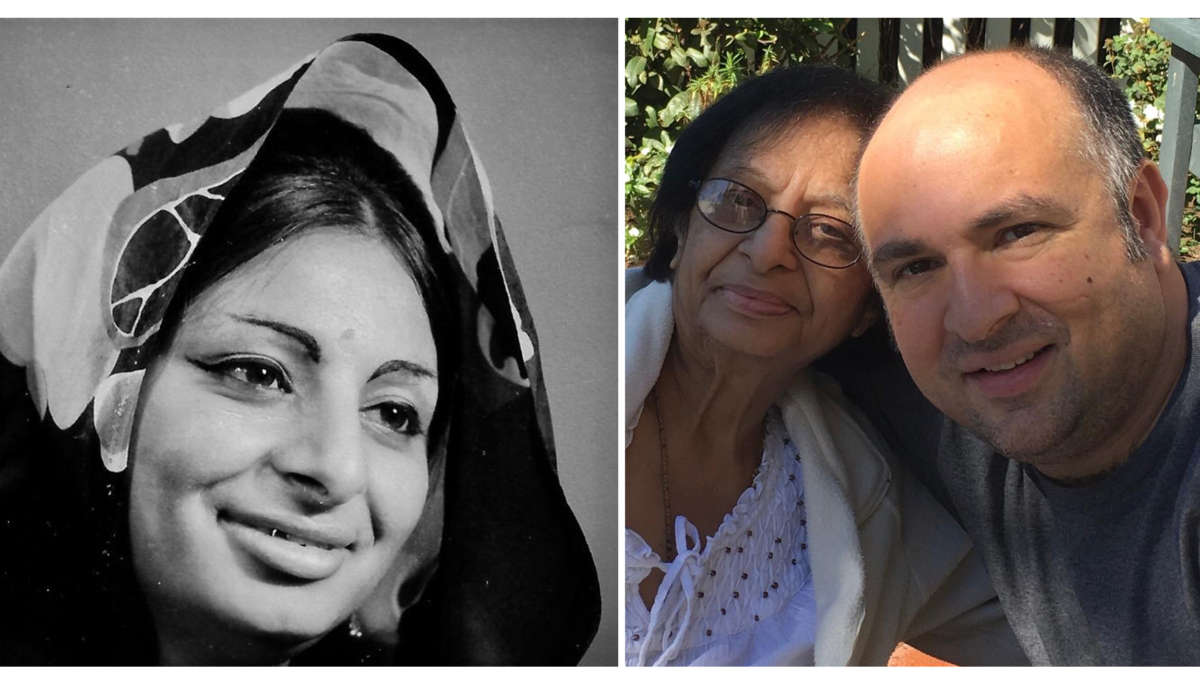 Thuja Hurkchand as a young woman and with her son Hitesh. She'd tell him, "Don't worry. It's going to be okay. I'm going to be okay." Yet in the face of the pandemic, he couldn't help but worry.

When the pandemic first hit, Hitesh Hurkchand had one overriding concern: How do I protect my mother?

Hurkchand lives in Boston. His mother, Thuja, was in South Africa. She was a widow, living at an assisted living facility. And she had diabetes, hypertension, and heart issues.

Thinking about how hard it was going to be to keep Thuja safe, Hurkchand would fall into bouts of despair. “Oh my god, I mean it was like every other day,” he recalls.

But Hurkchand happened to have deep experience in a very relevant field: He’s an epidemiologist by training and an expert on setting up pharmaceutical supply chains in low- and middle-income countries.

So Hurkchand threw himself into a series of coronavirus logistics projects for Africa with his employer, the United Nations World Food Program. This was how he was going to cope with his anxiety over his mother.

“I was doing things at a macro level — but in the hope of getting things right so that one day I could just get on the plane and go back and see her,” says Hurkchand.

The first mission was helping the World Food Program get protective gear to Africa.

Every day at 5 a.m. he’d take calls with officials. Then he’d call his mother — and plead with her to keep up precautions just a while longer.

“Basically telling my mother, ‘Please wear a mask. The vaccines are coming.’ ”

Thuja would tell Hurkchand that she knew what he was doing was important — even if she didn’t understand all the details.

“My mum grew up very poor — extremely poor,” says Hurkchand. “She didn’t make it past elementary school. She wasn’t allowed to go to school.”

But all her life Thuja had this irrepressible spirit.

Blocked from education she channeled her energy into becoming an incredible home cook. Her speciality was a red bean dish from her Gujarati Indian heritage.

She made sure all four of her children got college degrees.

But by summer the situation was looking more dire than ever. Thuja fell and broke her hip. Almost as soon as she recovered, she fractured her arm.

“She was immobilized, in a wheelchair,” says Hurkchand. “I was just waiting for that phone call to come from the facility where she was [saying] that she’s got COVID. I was on standby to receive a phone call every night. You can imagine how tense that is.”

Meanwhile it was becoming clear that it might take months and even years for his mother to get a vaccine. Even though multiple COVID-19 vaccines were in development, wealthy countries had pre-ordered so many initial doses, there were few left for African countries.

Hurkchand would get these wild fantasies for how to help Thuja. “I had this thought that I would go over there and like, you know, sneak in a vaccine from the United States and give it to her,” he says with a rueful laugh.

Instead Hurkchand launched into a variety of efforts to get Africa vaccines. He started working with the World Food Programme on a project to build out cold-chain storage in poor countries. And he became an unpaid adviser to the African Union — helping it start an unprecedented bid to buy vaccines directly.

By new year’s eve, Hurkchand was starting to feel optimistic. The African Union’s negotiations with vaccine makers were progressing. His mother was still COVID-free.

Then on Jan. 3, at 1 a.m., Hurkchand got the call he’d been dreading. Thuja had tested positive.

He raced into action. “Just making desperate phone calls to, you know, see if we could get her access to an ICU,” he recalls.

But South Africa was in the throes of a COVID surge — fueled by a new, seemingly more infectious variant. An ambulance drove Thuja from hospital to hospital. But there were no beds available.

Within three days, Thuja was gone. She was 76.

“But I couldn’t solve this for my mother.”