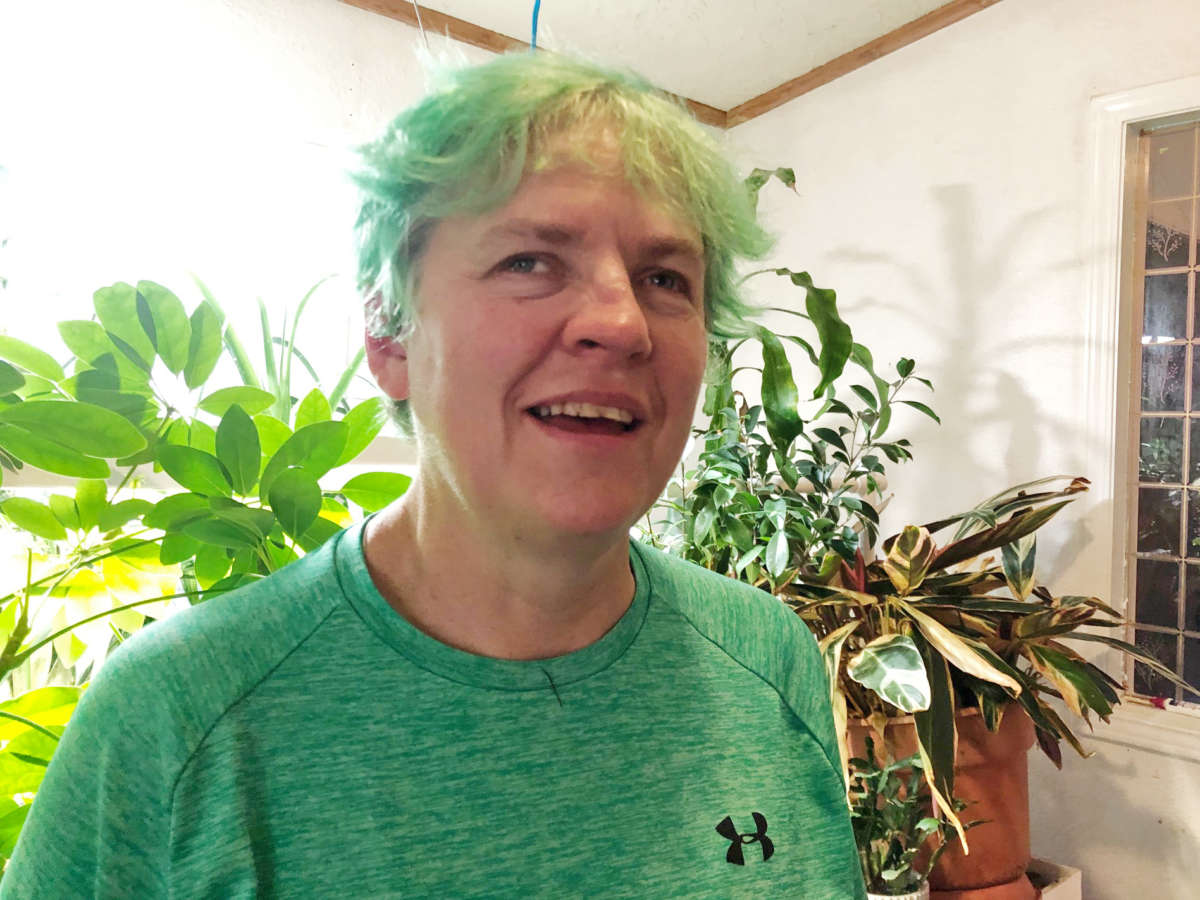 Carlene Knight, who has a congenital eye disorder, volunteered to let doctors edit the genes in her retina using CRISPR.

Carlene Knight’s vision was so bad that she couldn’t even maneuver around the call center where she works using her cane.

“I was bumping into the cubicles and really scaring people that were sitting at them,” says Knight, who was born with a rare genetic eye disease.

But that’s changed, as a result of volunteering for a landmark medical experiment. Her vision has improved enough for her to make out doorways, navigate hallways, spot objects and even see colors.

“It’s nice. I don’t scare people and I don’t have as many bruises on my body,” Knight says, laughing.

Knight is one of seven patients with a rare eye disease who volunteered to let doctors modify their DNA by injecting the revolutionary gene-editing tool CRISPR directly into cells that are still in their bodies. Knight and one other study volunteer gave NPR exclusive interviews about their experience.

This is the first time researchers worked with CRISPR this way. Earlier experiments had removed cells from patients’ bodies, edited them in the lab and then infused the modified cells back into the patients.

On Wednesday, researchers revealed the first evidence that the approach appears to be working — improving vision for at least some patients with the condition, known as Leber congenital amaurosis, or LCA, a severe form of vision impairment.

“It’s a really amazing technology and very powerful,” says Dr. Mark Pennesi, professor of ophthalmology at the Casey Eye Institute at the Oregon Health & Science University. He presented the results at an International Symposium on Retinal Degeneration in Nashville, Tenn.

Pennesi cautioned that more patients need to be treated and followed longer to confirm the approach is safe and to determine just how much it can help patients. But the current results are so promising that the researchers have gotten the go-ahead to move on to the next group of patients.

Knight’s vision is much clearer and brighter since getting the experimental treatment. Instead of having to reach around blindly to find objects, she can simply look for them.

Recently, for example, when she dropped a fork on her kitchen floor, she says, “I just leaned down to pick it up and didn’t know where it was and just saw it on the floor. It’s very cool.”

Colors are also much brighter and more vivid.

“I’ve always loved colors. Since I was a kid it’s one of those things I could enjoy with just a small amount of vision. But now I realize how much brighter they were as a kid because I can see them a lot more brilliantly now,” she says. “It’s just amazing.”

So Knight, who’s 55 and lives outside Portland, Oregon, dyed her hair her favorite color, green, to celebrate.

LCA is caused by a genetic mutation that disables crucial cells in the retina. Patients experience a progressive loss of vision starting at birth that usually renders them legally blind. The treatment is far from curing the patients in the trial, but the changes some experienced are significant enough to have a meaningful impact on their daily lives.

Another volunteer in the experiment, Michael Kalberer, can also now see colors for the first time in years. He noticed it about a month after the procedure when a red car drove past. But the most dramatic moment occurred on the dance floor of his cousin’s wedding.

“I could see the DJ’s strobe lights change color and identify them to my cousins who were dancing with me,” says Kalberer. “That was that was a very, very fun joyous moment.”

Kalberer, who’s 43 and lives on Long Island, can also recognize shapes and light much better and he regained more peripheral vision, which makes it way easier to do simple things like eat in a restaurant.

“It has enabled me to navigate a plate of food and stab food a little bit easier. If I look down at a plate of food and there’s spoon or utensil in it I can see the edge of the utensil on the outside of the bowl or plate,” Kalberer says. “So those changes are very, very significant to me.”

He can even finally watch sunsets again. He recalls the first time he saw one after the treatment. He was coming home from a meal with a friend when he saw pink in the sky.

“She goes, ‘Yeah, you see the sunset. That’s the sunset.’ And we both smiled at each other,” Kalberer says. “It was a great moment.”

CRISPR is already showing promise for treating devastating blood disorders like sickle disease disease and beta thalassemia. And doctors are trying to use it to treat cancer. But those experiments involve taking cells out of the body, editing them in the lab, and then infusing them back into patients. That’s impossible for diseases like LCA, because cells from the retina can’t be removed and then put back into the eye.

So doctors genetically modified a harmless virus to ferry the CRISPR gene-editor and infused billions of the modified viruses into the retinas of Knight’s left eye and Kalberer’s right eye, as well as one eye of five other patients. The procedure was done only on only one eye just in case something went wrong. The doctors hope to treat the patients’ other eye after the research is complete.

Once the CRISPR was inside the cells of the retinas, the hope was that it would cut out the genetic mutation causing the disease, restoring vision by reactivating the dormant cells.

“We’re thrilled to see early signs of efficacy because that means gene-editing is working. This is the first time we’re having evidence that gene-editing is functioning inside somebody and it’s improving — in this case — their visual function,” Pierce says.

But Kalberer, who got the lowest dose, and one volunteer who got a higher dose, began reporting improvement starting at about four to six weeks after the procedure. Knight and one other patient who received a higher dose improved enough to show improvement on a battery of tests that included navigating a maze. For two others, it’s too soon to tell.

None of the patients have regained normal vision — far from it. But the improvements are already making a difference to patients, the researchers say. And no significant side effects have occurred.

Many more patients will have to be treated and followed for much longer, to make sure the treatment is safe and know just how much this might be helping.

The researchers have begun administering a higher dose, which could work better, and eventually plan to start treating children, who have the best chance of benefiting.

They’re also optimistic the vision of the patients treated so far could improve with time.

“When you improve the function of the retina, sometimes there’s a lag for the brain being able to recognize and use that vision,” Pennesi says. “It takes time to learn how to use that improved vision.”

The findings could open the door to using the same approach to treat other diseases where doctors can’t take cells out of the body, including brain disorders like Huntington’s and muscle diseases like muscular dystrophy.

“It’s exciting. The world is our oyster. We almost have too many targets that we can go after,” says Dr. Lisa Michaels, chief medical officer at Editas Medicine, which is sponsoring the study.

For their part, Knight and Kalberer are just thrilled that they can see at least a little better.

“I’m just incredibly honored and privileged to be part of this, and very, very excited to literally, hopefully, see what comes in the future,” Kalberer says.