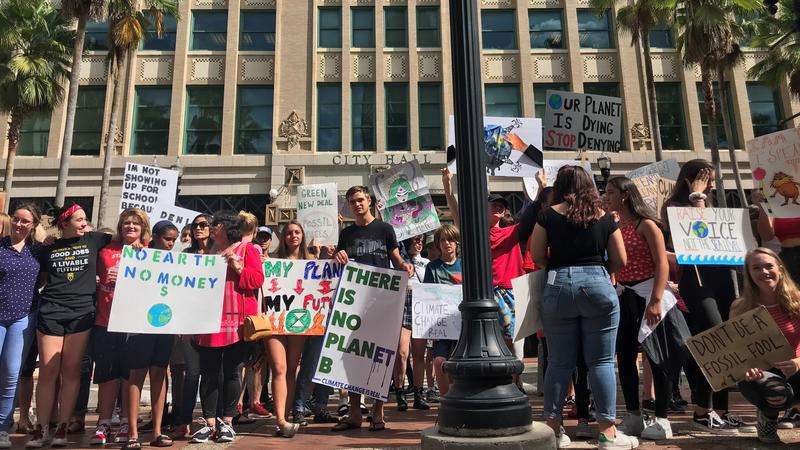 About 100 people participate in a climate strike outside of Jacksonville's City Hall on Friday. BRENDAN RIVERS / WJCT NEWS

Millions of students and adults around the world took time off from school and work Friday to participate in a Global Climate Strike. The action comes ahead of a planned United Nations Climate Action Summit that takes place next week in New York.

We spoke to Caroline Lewis, Founder and Senior Advisor of the Cleo Institute, a climate education nonprofit. Her organization helped plan the strike in Miami Beach.  Two high school students who participated in it, Andrew Weaver and John Paul Mejia, also took part in the discussion.

Additionally, Reporter Jessica Meszaros of WUSF in Tampa joined us from a climate strike in St. Petersburg.

Two Florida congressmen are heading up an effort in Washington to deal with climate change. Representative Ted Deutch, a Democrat, and Representative Francis Rooney, a Republican, lead the bipartisan Climate Solutions Caucus on Capitol Hill, and joined us with more information.

Food giant Nestlé is requesting a permit that would allow the company to pump up to a million gallons of water a day from Ginnie Springs in Gilchrist County to produce more bottled water. But environmentalists oppose the deal, citing concerns about the water supply. Reporter Amy Greene of WMFE in Orlando joined us for a closer look.