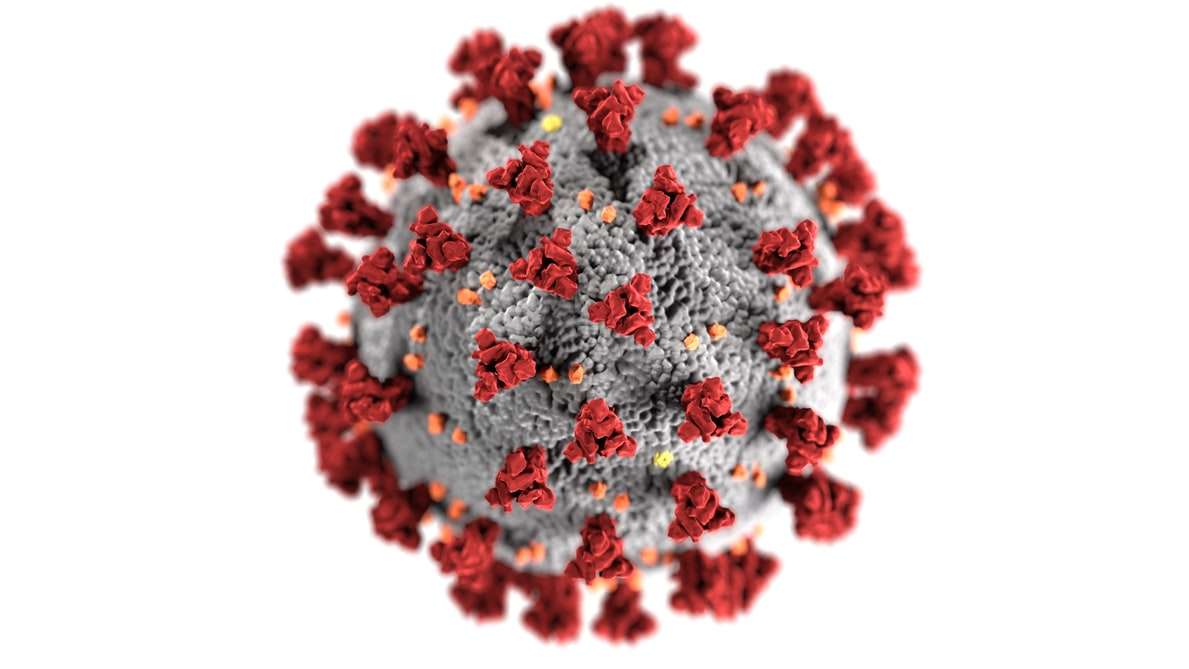 LAKE BUENA VISTA, Fla. (AP) — NBA players could have some family members or close friends inside the season-restart bubble with them by the end of the month.

And that raises the possibility of having a real, albeit small, cheering section for some playoff games.

The league detailed the policies for guest arrivals to teams on Wednesday.

The opportunity to bring guests into the bubble at Walt Disney World will be only for teams advancing to the second round of the playoffs, and the earliest any guest could satisfy quarantine rules and be reunited with a player is Aug. 31.

That brings the total number of cases in Florida to 550,901 and the death toll to 8,765 people since the start of the pandemic.

More than 31,900 people in the state have been hospitalized.

The first dog with COVID-19 has died, and there’s a lot we still don’t know

Short Wave, NPR
Buddy, an adult German Shepard from Staten Island, was the first dog in the U.S. to test positive for COVID-19. His death reveals just how little we know about the coronavirus and pets.

The school board agreed Tuesday to require all students, employees and visitors to wear masks at school.

Excluded from the policy are children under age 2 and those with certain medical conditions, although Superintendent Barbara Jenkins said that last exemption may need to be revisited.

“We have in writing from the Department of Health saying if a child can’t wear a mask they probably shouldn’t be on campus. They think it’s unsafe.”

The academic year began in Orange County on Monday with everyone learning from home.

Some 30% of students and teachers have indicated a preference for face-to-face learning when brick-and-mortar schools reopen August 21st.

More than three months after its last case of community spread, New Zealand has four new cases of the coronavirus from an unknown source.

The island nation, seen as a global exemplar in the battle to contain the coronavirus, moved quickly to identify the source of transmission and halt further spread.

All four cases are members of the same family, who live in South Auckland, the government said Tuesday.

The first case identified in the cluster was a person in their 50s with no overseas travel history. The person has been symptomatic for five days and was confirmed positive on Tuesday. The six members of the person’s household were then tested: three tested positive and three negative.

While the cases are all in one household, more than one workplace was affected, Prime Minister Jacinda Ardern said at a late evening press conference on Tuesday in which she announced a heightened state of alert for the country.

Two major college conferences — the Big Ten and Pac-12 — each announced Tuesday they were sidelining college football and other fall sports because of the coronavirus, just weeks before schools were scheduled to play their first games.

The Big Ten, which includes universities with powerhouse sports programs, such as Ohio State, Michigan, Nebraska, Wisconsin, Penn State and Michigan State, said it will look at holding some competitions in the spring.

The Pac-12, which includes elite sports programs Stanford, UCLA, USC and University of Oregon, announced shortly after the Big Ten, adding that officials reached a unanimous decision to call off athletic competition through the calendar year.

“Our primary responsibility is to make the best possible decisions in the interest of our students, faculty and staff,” said Morton Schapiro, chair of the Big Ten Council of Presidents/Chancellors and president of Northwestern University, in a statement issued Tuesday afternoon.

In addition to football, the Big Ten’s decision postpones fall sports such as cross-country, field hockey, soccer and women’s volleyball. Under the college schedule, basketball is categorized as a winter sport.

The program is open to Orange County tenants and landlords, and up to $4,000 dollars in back rent could be paid directly to landlords.

However, only residents who will be able to pay rent going forward are eligible- which county officials noted was going to be the program’s biggest hurdle.

Orange County Mayor Jerry Demings said getting it approved under an emergency order was necessary as time is of the essence.

“If we had to wait for the traditional processes to occur to bring it back before the board, we lose the time, the valuable time necessary to divert the evictions from occurring in the first place.”

Both the tenant and landlord must agree to the program, which will be administered by the Orange County Bar Association.

The program is scheduled to start August 25.

TALLAHASSEE, Fla. (AP) — Gov. Ron DeSantis wants college football to be played in Florida this fall despite the coronavirus outbreak.

Speaking Tuesday at Florida State’s practice facility, DeSantis said the sport can be played safely. The players are tested weekly and are told not to socialize with outsiders.

He said if the season is canceled, the players won’t have that discipline and will be more likely to catch the virus.

His push came shortly after the state announced 277 more deaths from the virus. That is a one-day record, but likely includes deaths from the weekend and earlier and is not a pure 24-hour total.

The Pinellas County School Board on Tuesday outlined what will happen if a student or teacher tests positive for COVID-19 once schools reopen.

Dozens, even hundreds could have to stay home under quarantine for 14 days. If it’s a teacher, every person in their classes would be affected.

When it comes to students, School Health Services Officer Sara O’Toole says calls for quarantine could extend far beyond the classroom.

School board members also approved a mask policy in line with CDC guidance, and voted to proceed with plans to reopen on August 24.

Samantha Bee on resilience and remote late-night with Guy Raz

How I Built This, NPR

Currently in its fifth season, Full Frontal with Samantha Bee offers a unique take on the news and explores stories that have been largely overlooked by traditional media outlets.

In this How I Built Resilience live stream, she and Guy talk about what it’s like to helm a late-night show remotely, and how she’s thinking about leadership these days.

Already 1.6 million Florida ballots have been cast by mail ahead of the August primary.

Susan MacManus is a political analyst from the University of South Florida. She said Florida has a leg up on other states.

“Some states are just getting into it, and they don’t have any idea of the complexities of VBM, which is vote by mail, which, it’s now called.”

MacManus says she is concerned that turnout next week will be far lower than in November.

She says the no-party-affiliate voter may not realize that there are a lot of other races voters can weigh in on without being registered Democrat or Republican.

“They can weigh in on these school board races, and the judicial races. I think this is very important that people understand this right. Their lack of knowledge of this right is one of the reasons that turnout is traditionally lower in the August primary.”

The primary is August 18.

Wakulla County Schools kicked off training for parents and students on how to use the district’s distance learning platform on Tuesday. Remote classes begin August 27.

During the training sessions, families can also pick up laptops for their students to use. Superintendent Robert Pearce says each session will include groups of about 30 people.

“They’ll be using PowerPoint to help walk people through and some of it will be interacting with the PowerPoint with the actual program on the screens so that they can see what they’d be doing as they work through it.”

Pearce says the sessions will take place in large areas, like the district office’s auditorium. He says there’s also training online if families can’t make it to the in-person training sessions.

Palm Beach County’s health director cautioned county commissioners not to get too comfortable with the downward trend in COVID-19 cases.

The daily positive rate is dropping, but the overall rate is still concerning.

Speaking at a virtual commission meeting August 11, Dr. Alina Alonso says the daily lab positivity rate reflects how much virus is in the community at a given moment.

“That rate is going down. We’re having less virus in the community, which is a good thing.”

But, the number that will be used for reopening the economy is the overall positivity rate.

The overall rate shows the ratio of positive coronavirus tests since the beginning of the pandemic. Alonso says the goal is to get the overall positivity rate below 5 percent before opening the economy up again.

“The state goal is 10 percent, but almost all experts in epidemiology and the CDC recommend a goal of five percent because that is where it’s possible to do effective contact tracing.”

Contact tracing helps epidemiologists figure out where the virus is spreading so that they can get ahead of it.

The Children of Smithfield

Last March, as meatpacking plants across the nation quickly became invisible hotspots for the coronavirus, it became clear to her that the plant, owned by Smithfield Foods, wasn’t able to ensure social distancing or provide enough protective equipment.

Maira was alarmed at the conditions—and that workers found it difficult to speak up.

So, she became part of a group called the “The Children of Smithfield,” joining other family members of meatpacking workers to protest.

TALLAHASSEE, Fla. (AP) — Florida Gov. Ron DeSantis isn’t happy that a state agency awarded a huge contract to a company that he says bungled the state’s unemployment filing system, but he says the situation is out of his hands.

The Republican governor said Tuesday he obviously didn’t want the Agency for Health Care Administration to give Deloitte a contract worth more than $100 million, but said he can’t by law deny the award.

Deloitte is the same company DeSantis asked the state inspector general to investigate because of problems with the state’s unemployment filing system.

And then there were three.

The Atlantic Coast Conference, Big 12 and Southeastern Conference are still moving forward with plans for a fall college football season.

Two other Power Five leagues, the Big Ten and the Pac-12, have called things off.

SEC Commissioner Greg Sankey says he is comfortable with the 14-member conference’s approach.

The ACC says it will continue to follow advice of medical advisers and health officials. The Big 12 Board of Directors was meeting late Tuesday.