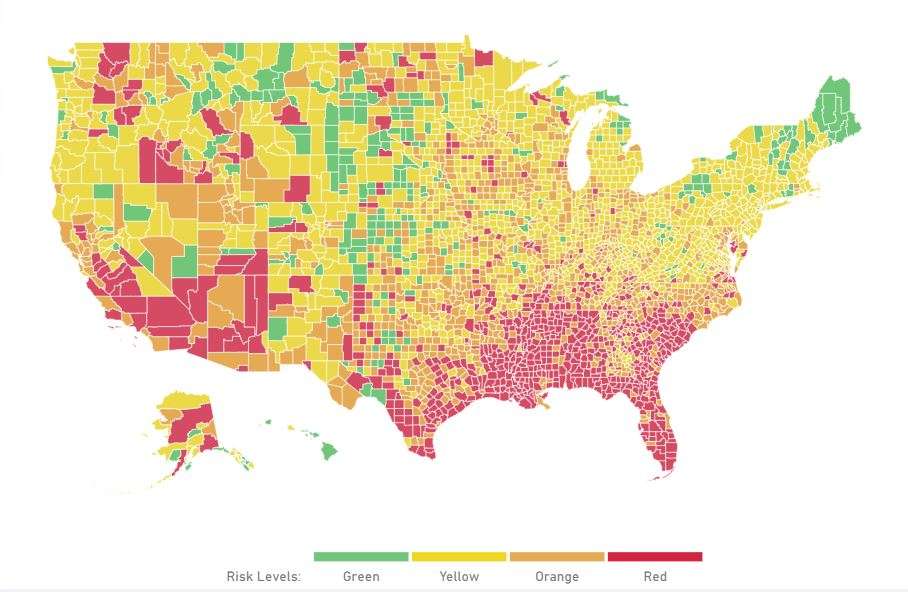 Florida added 8,901 confirmed COVID-19 cases, and the death toll rose by 77, according to the latest numbers from the state Department of Health Monday.

Marion County, though, is adding more cases per day than a week ago, and Sumter is basically unchanged.

About 15% of test results are coming back positive, which is largely unchanged over the last two weeks.

Overall, Florida has been averaging about 10,500 cases per day in the last week – which is about 1,000 cases fewer per day than the week prior.

Florida teachers and Democrats say it would be reckless to reopen schools now as the number of coronavirus cases in Florida surges.

The teachers and Democrats spoke out on a conference call Monday, as Vice President Mike Pence visited South Florida.

They said the Trump and DeSantis administrations have left school leaders with, as they put it, impossible decisions over how to manage school reopenings.

The world’s biggest COVID-19 vaccine study has begun with the first of 30,000 planned volunteers helping to test shots created by the U.S. government — one of several candidates in the final stretch of the global vaccine race.

There’s still no guarantee that the experimental vaccine, developed by the National Institutes of Health and Moderna Inc., will really protect. The study began Monday.

Volunteers won’t know if they’re getting the real shot or a dummy version. After two doses, scientists will closely track which group experiences more infections as they go about their daily routines, especially in areas where the virus still is spreading unchecked.

Moderna said the vaccination was done in Savannah, Georgia, the first site to get underway among more than seven dozen trial sites scattered around the country.

Florida surpassed New York over the weekend as the state with the second-most coronavirus cases in the U.S. More than 9,300 new cases were reported in the Sunshine State on Sunday, accompanied by an additional 78 new deaths. Florida’s 423,855 coronavirus cases were surpassed only by California’s 453,659 cases. With 39.5 million residents, California has almost double the population of Florida’s 21.4 million inhabitants. California is the nation’s most populous state, followed by Texas, Florida and New York. New York, once the epicenter of the virus in the U.S., had 411,736 coronavirus cases. The state has 19.4 million residents.

The world’s largest in-water boat show will not be slowing down during the pandemic, but you will have to wear a face mask if you want to attend this year’s Fort Lauderdale International Boat Show, better known as FLIBS.

“Your ticket will be ticketless, you’re gonna to show up with your mask – the docks are going to be wider in certain areas where we know there’s gonna be high traffic,” said Phil Purcell, CEO and President of the Marine Industries Association of South Florida, which owns the boat show.

The show is an economic engine- a driving force in the regional and local economy. Last year’s show brought in over $715 million in sales.

“Some of the businesses, from all over, do you know, anywhere from 20  to 40 percent of their yearly annual growth at this show,” said Purcell.

“So, when people said, ‘hey are you going to have a show?’ By all means, we’re going to follow the guidelines, produce the show. The industry needs it. It is that important.”

FLIBS will continue ahead as planned, October 28 through November first.

Protestors opposed to the full reopening of Florida schools demonstrated near the Governor’s Mansion Saturday evening.

Nearly one-hundred demonstrators walked or drove from the State Department of Education Building to the Mansion.

“We are here to say we really don’t think it will be safe for the schools to reopen,” said retired nurse Janet Timken.

“I’m really angry that I have to convince our governor that teachers, students and their families shouldn’t have to die for the economy,” said Codgy.

Mary Claire, a member of the task force looking at the reopening of Leon County Schools, said the school district is “stuck between the FLDOE (Florida Department of Education) that is ordering fully opened schools subject to the advice of state and local health departments and a local health department that says it’s actually not empowered to provide that advice.”

The Leon School Board’s next meeting is this Tuesday evening.