‘You Have To Try’: Puerto Ricans, Without Power, Find Ways Forward 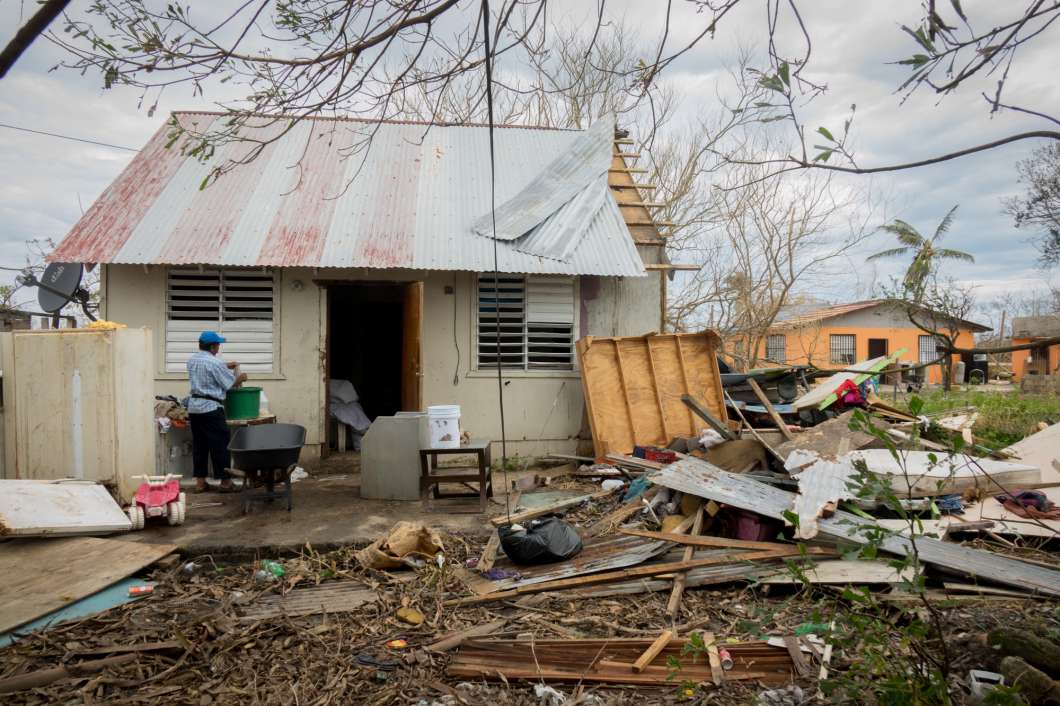 Fisherman Justino Rodriguez Rivera washes clothes with water from a well in Loiza, Puerto Rico, which sustained heavy damage by the destructive path of Hurricane Maria. Rodriguez and his wife evacuated to their church.

Outside of his little business on the side of the road in a small town in Loiza, Puerto Rico, Santiago Quiñones adjusts a small solar panel.

It’s charging a floodlight, to illuminate the cramped space at night. He takes it down and demonstrates how it works. “You can’t see right now because it’s daylight, but it’s already charged,” he says in Spanish.

Like nearly everyone else in Puerto Rico, 73-year-old Quiñones has lost access to the power grid. His house was also badly damaged by floodwaters when Hurricane Maria swept over the island.

So he and his wife are living across the street, using a bed set up in his shop, which survived the storm with relatively minor damage. They have a generator powering, among other things, a TV in their makeshift bedroom. And to help see at night there’s the solar panel and some rechargeable battery-powered lights.

They bought the light three months ago “for the storms,” Quiñones says. They’d heard it could be a dangerous hurricane season this year.

All over the island, people are facing the challenging task of recovering from the damage wrought by Maria — and simultaneously grappling with a power outage that won’t be over for weeks at the least.

In the streets of Loiza and Rio Grande, municipalities just east of San Juan, the daunting scale of the problem is easy to see.

Power lines dangle dangerously across coastal roads. Dozens of wooden telephone poles, in a continuous line, have toppled to the ground. Concrete power poles have snapped completely in half.

The effect on the island is visible from space — at night, Puerto Rico has gone dark. The light you can see, with very few exceptions, is coming from buildings with generators.

And inside the dark spots on the map, people are trying to cope with whatever they have left.

In Torrecilla Baja, in Loiza, fisherman Justino Rodriguez Rivera, 56, is washing clothes — by hand — outside his daughter’s house. His own home was destroyed in the hurricane, the roof ripped off completely.

“My clothes, my wife’s clothes,” he says in Spanish. “Trying to save a little bit of clothing so not all of it goes bad. Imagine that … I lost everything else.”

He fills another bucket with well water and carries it from one stoop to another.

A little to the south, in Canovanas, retired boxing instructor Jose Torres, 72, is sleeping on a chair in his balcony. It’s too hot inside the house without power.

He lost all his medicine when his home flooded. He has diabetes and hasn’t tested his blood sugar in days. He’s trying to eat consistently to keep his blood sugar in check, but it’s hard, because their stove relied on power and the food in the fridge all spoiled. Temperatures here are climbing above 90 degrees, which means insulin must be refrigerated. And refrigeration requires power.

“All the meat, we threw it away. Or — we didn’t throw it away, we cooked it for the dogs,” he said. “The dogs are eating better than me now,” he says.

“I’ve got some bananas and yautia,” he said, referring to a root vegetable that grows in the Carribbean. “My sister gave me a gas [stove] and my wife cooked rice yesterday,” he said.

“The whole [of] Puerto Rico is like this,” he says. “I don’t think we’re the only ones like this … We will survive.”

Amparo Ventura is sitting outside her restaurant, Puerta del Mar, in the coastal town of Piñones. She had a plan. She has a generator and enough fuel to last for days. But that’s not enough to bring nearby residents, many of whom have lost cars or lack fuel, venturing out on the sand-covered road along the coast.

The only people in the parking lot are employees clearing away debris.

The hardest thing after the storm, Ventura said, was that she didn’t have any work to offer her employees, and couldn’t pay them.

“I want them to have the money for their families.” she said. “This week we did the impossible,” she says — that is, they opened. “But it was hard.”

Now, her generator is running. Her lights were on. Her doors were open for anybody who could make it.

“There aren’t many customers, but you have to try.”