‘You Don’t Expect It To Happen To You’: When Your Job Is Suddenly Gone 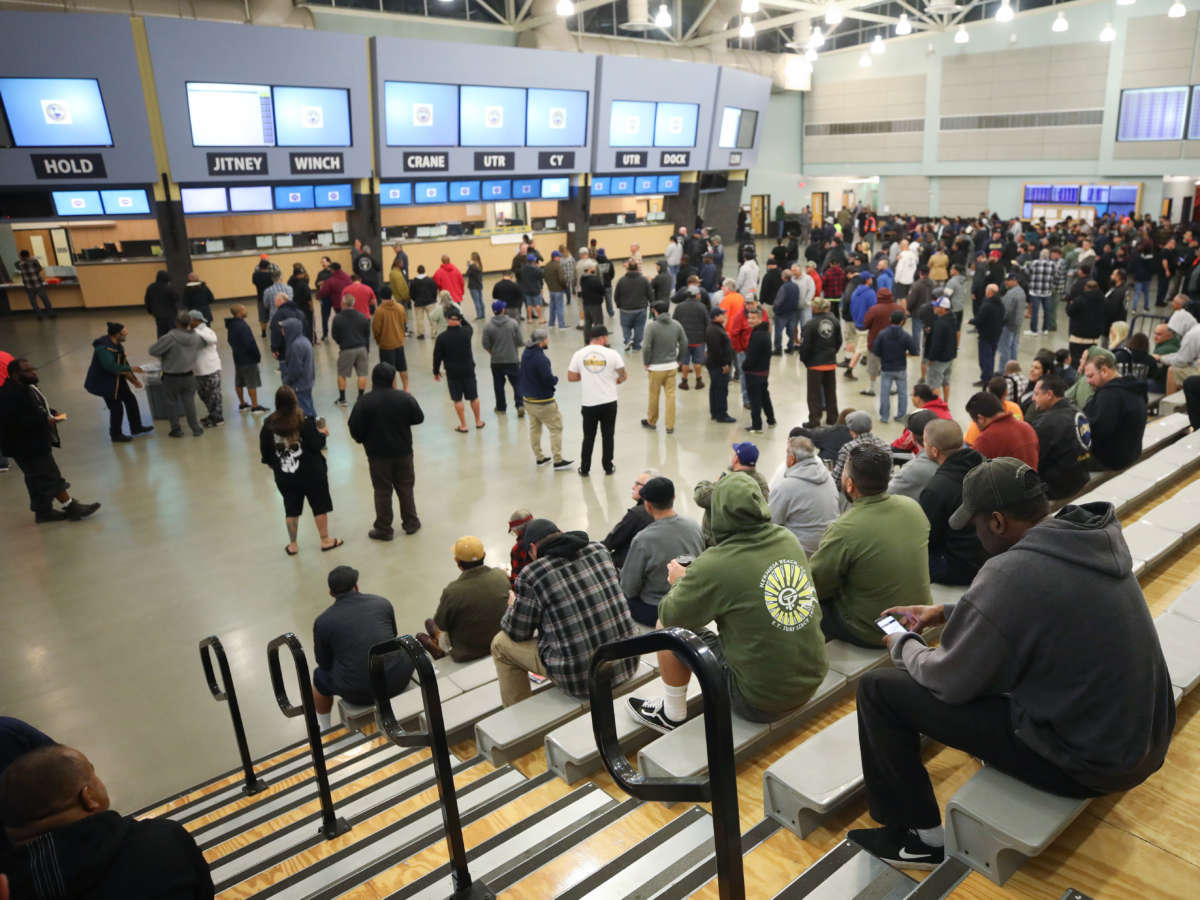 Workers say this union hall is usually packed with over 1,000 people awaiting daily jobs for Los Angeles and Long Beach ports — but the shipments from China have been slow due to the coronavirus crisis.
Image credit: Mario Tama

When Kary Wayson walked through empty Seattle streets last week, she didn’t realize she was heading to her last shift at work.

“It seemed like all of a sudden Seattle itself took a nosedive,” she says.

Her city had become an epicenter of the coronavirus outbreak. Parking lots, typically jammed, were deserted. Shop fronts had handwritten “closed” signs on their windows.

The restaurant where Wayson had been a waitress for almost 16 years tried limiting the menu and cutting back hours.

The restaurant couldn’t keep absorbing the losses. Wayson became one of many workers around the country — in tourism, food, events, arts, education and many others — thrown into a surreal limbo. Jobless, but maybe temporarily.

The new reality for many of them: Applying for unemployment, dipping into savings, searching for new work in the middle of a pandemic.

Hoping perhaps to get their old jobs back — but when or if?

“Getting laid off is crazy enough on its own but in addition to everything that’s going on in the world, it’s just like, man, this is insane,” says Natalie Roblin, who also lost her job last week.

She worked in marketing in New Orleans, for a company that relies both on travel and large events for business. Canceled music tours, shows, conferences and other live events have decimated hundreds of freelancers and full-timers who stage, staff and service these gatherings.

And, day by day, more restrictions continue to kick in. Federal officials recommend avoiding groups bigger than 10 people. Several states are forcing bars, restaurants and event venues to close. The Bay Area was ordered to shelter in place, keeping only essential businesses open.

Nearly one in five households have already experienced a layoff or a reduction in work hours, according to a new NPR/PBS NewsHour/Marist poll. Analysts say millions of jobs may ultimately be affected. When NPR asked people to share their stories of layoffs and pay cuts, about 600 responded within four days.

Perla Pimentel was an event coordinator in Orlando who suddenly found herself with no events to coordinate.

“We could tell that the company was hurting because we were watching all of our clients cancel,” she says. “It’s a little bit of — you don’t really expect it to happen to you.”

Pimentel says her layoff was amicable, with bosses saying they’d be happy to have her back when things normalize. But she can’t bank on that possibility, whenever it might happen.

She excused herself from the conference room, hid in her car for a cry and called her father. He told her not to panic, they’ll get through it. Pimentel gave herself a long weekend to breathe and process before hitting her budget spreadsheets to look for some cuts.

Similar math is playing out in Neftali Dubon’s household. He’s a truck driver in the ports of Los Angeles and Long Beach, shipping hubs for Chinese imports. With coronavirus quarantines idling Chinese factories, drivers like Dubon have been losing work.

“I’ve never seen what I’m seeing now,” he says. “Places where we would have stacks of containers, it’s just now empty.”

Dubon is an owner-operator. That means he’s considered his own boss. So he’s technically still employed and doesn’t qualify for government assistance. He gets paid for each load he picks up from the port, and he says he needs at least five or six runs like that per day to make a living. He’s now doing one or two.

Meanwhile, he’s still paying down a loan on his trucking rig — which he bought on his personal credit — as well as insurance and storage fees. The total: more than $2,000.

On Sunday, Wayson, the waitress in Seattle, spent two hours on the phone with the unemployment office. She’d made some mistake on her application and was live-messaging her experience to her former coworkers on a group text.

“I think we’re all sort of in our pajamas, glued to our computers and phones, trying to figure out what to do,” Wayson says.

Pimentel, in Florida, discovered another, unexpected side-effect of unemployment: more time with an overeager housemate — her grandmother.

“She loves it!” Pimentel says with a laugh. “I go in the kitchen, I eat breakfast, she’s like, ‘Sit down, let’s hang out. What are you doing later today?’ ”

What she’s doing is filing for unemployment, calling to renegotiate her student loan and maybe, just maybe, landing a new job.