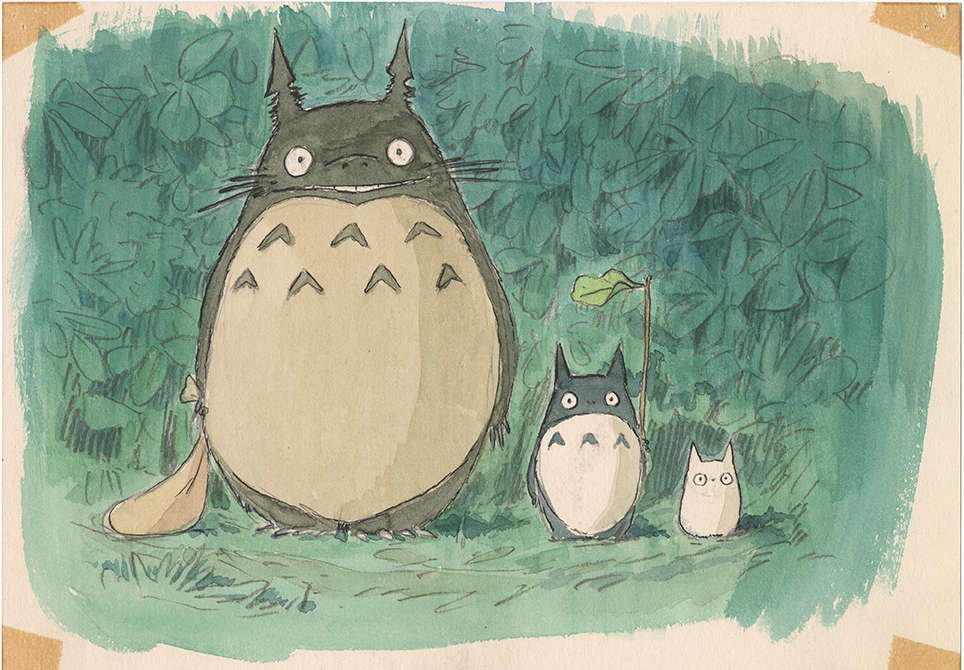 For the first time in North America, his work is being featured in a major retrospective at the brand-new Academy Museum of Motion Pictures in Los Angeles. This week, the organization that hosts the Oscars unveiled the museum devoted to cinema.

“He’s a cinematic master,” says the Academy Museum’s chief artistic and programming officer Jacqueline Stewart, who just this week became a MacArthur Fellow and received their “genius” grant. “Miyazaki is an international filmmaker. We wanted to highlight somebody who really had global appeal and global impact. And one of the things that’s really unique about his work, too, is that it actually does appeal to young people and older generations with equal passion and vision.”

The 11,000-square-foot exhibition includes images of Miyazaki’s big-eyed, innocent-looking children and creatures, flying castles, tree houses and lush forests. Visitors enter Miyazaki’s enchanted world through an tunnel made of green fabric. It’s meant to evoke a magical “tree tunnel” inhabited by mystical wood spirits, a portal featured in his animated film My Neighbor Totoro (1988). The tunnel leads to the first gallery room, where scenes from his 11 animated features are projected on the walls.

Also on display is a wooden desk from Miyazaki’s animation studio, and many of his hand-drawn character sketches (he started off as a manga artist). There are storyboards and other material from his films such Princess Mononoke (1997), Kiki’s Delivery Service (1989) and the Oscar-winning coming-of-age film Spirited Away (2001). Inside glass cases are Miyazaki’s two Oscars statuettes.

Miyazaki has never before exhibited his work in the United States, and much of this material had never left Japan until now. David Rubin, the president of the Academy, says the filmmaker didn’t immediately say yes to showing his work at the new museum. “He had to check it out. He had to his friends here to ask, ‘is this for real?’ There were a lot of our filmmaker members who spoke with him and said, ‘You know, we will treat your work in a way that you would appreciate. We will honor your work. ”

Jessica Niebel, the curator behind the Miyazaki exhibition, says she worked with the filmmaker’s Studio Ghibli and the Ghibli Museum in Japan to gather all the materials. She says Miyazaki’s animated characters are complex, with fully developed lives. “Miyazaki conveys the nuance behind his protagonist’s intentions, and invites viewers to recognize the contradictions of human nature: to act responsibly, show respect and humility, and coexist with the environment.”

Niebel calls Miyazaki’s films “pure poetry” and says that viewers can get lost in the beautiful environments and landscapes he creates by interacting with a few of the exhibition’s installations. “People want to go on a similar journey that his protagonists do,” she says, “and we offer that similar experience to our visitors, to get lost in his films, and get lost in this exhibition.”

Here are some of the highlights from the exhibition:

A giant tree stands between two of the Miyazaki galleries, with a fabricated wooden trunk that takes four people to hug. Strings and fiberglass strands hang from the ceiling, lit from above in neon green, giving it a magic glow from within where the character Totoro is supposed to be hiding. Painted on the museum walls are depictions of Miyazaki’s kodama tree spirits from the film Princess Mononoke. They appear and disappear with light, making them appear as if they are floating.

Trees play an important role in many of Miyazaki’s movies: Castle in the Sky, My Neighbor Totoro and Princess Mononoke, among others. Niebel says the the exhibition’s designers wanted to include a tree in the exhibition to introduce the idea of the magical forest, “where we can come for purification, to find balance in our lives again and to get energized.”

The curators also wanted to include the tree to create an immersive experience for museum visitors “where you just bump into this massive standalone tree and you can’t avoid it, you kind of have to interact with it,” Niebel says. “We try to invite visitors to think about the significance of trees in their lives.”

She says that, in a subtle way, Miyazaki’s films show that trees allow people to connect with the spiritual world — a kind of natural magic that exists in all his films. “Spirits can appear and disappear,” she says. “And they herald special moments in his character’s journeys.”

On the museum walls, you can read a poem Miyazaki wrote for his film staff to better understand the sensibility of his characters.

Just when they seemed to appear

They tittered in laughter and have already disappeared

Just when they seemed to be walking at my feet

They were already in the duskiness far away, laughing

When spoken to, they run off in shyness

When ignored, they come close

You small children, children of the forest

Ah, to you this forest that you inhabit is so full of fun.

In the middle of another room of the Miyazaki exhibition, there is a sloped platform, covered with green carpeting that resembles a grassy knoll. Visitors are invited to lie down and look up at a round screen projecting a video of clouds drifting past.

Skyview, as the installation is called, was inspired by a scene in Kiki’s Delivery Service, during which the protagonist Kiki is laying on the grass, looking up at the sky, watching the clouds. “It’s just a peaceful moment where she is immersed in nature, but she makes a very important decision: to leave her parents that night after her 13th birthday and become a witch in training.,” says curator Niebel. “These moments where everything slows down and nothing much happens, are very typical of Hayao Miyazaki’s films.”

Niebel says the installation offers visitors their own moment of quiet and solitude, to contemplate nature.

Like the entrance, the final section of the exhibition is another tree tunnel leading to the rest of the Academy Museum. It’s a darkened hallway in which you can hear footsteps. They are meant to be those of the 10-year-old Chihiro Ogino (voiced by Rumi Hiiragi), as she leaves the realm of Spirited Away and returns to real life. In front of the final doorway is a smiling, small, rounded boulder, the “two-faced Stone Spirit” who wished her good luck on her adventure.

“We wanted to kind of indicate here that, yes, this is the end of the exhibition, but it shouldn’t be the end of your journey,” says Niebel. “So continue the journey. Feel inspired by Hayao Miyazaki’s films, maybe even by this exhibition. ”