Yosemite National Park Grows Toward West In Largest Expansion Since 1949 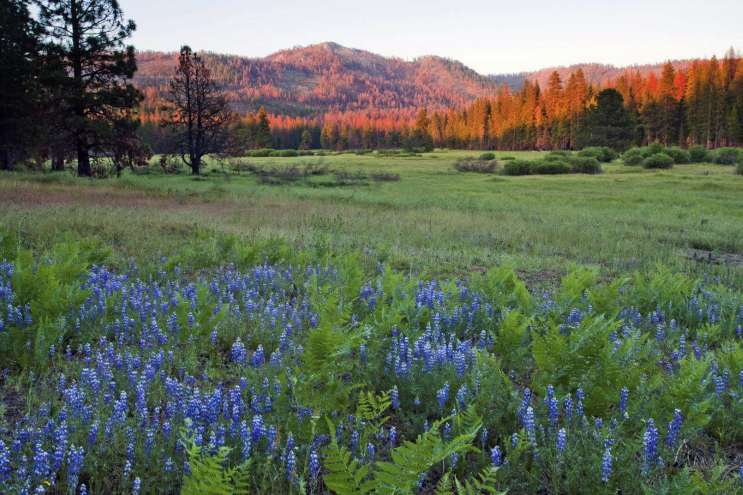 A photo provided by The Trust for Public Land shows Ackerson Meadow in Yosemite National Park, Calif. Visitors to the park now have more room to explore nature with Wednesday's announcement that the park's western boundary has expanded to include Ackerson Meadow, 400 acres of tree-covered Sierra Nevada foothills, grassland and a creek that flows into the Tuolumne River.
Image credit: Robb Hirsch

Yosemite National Park is growing by 400 acres — the largest expansion to the park since 1949.

NPR’s Nathan Rott reports that the new addition to the park, a stretch of land along the western boundary of Yosemite, has historically been used for logging and cattle grazing.

The Trust for Public Land, a conservation group, bought the land from private owners for $2.3 million and donated it to expand the park. The purchase was supported by the Yosemite Conservancy, National Park Trust and American Rivers, as well as private donors.

“The area includes a sprawling grassy meadow, wetlands and rolling hills dotted with tall pine trees, and is known to be home to at least two endangered species,” Nathan reports.

The Trust for Public Land calls Ackerson Meadow, included in the donation, “a gentler landscape than the imposing granite cliffs of Yosemite Valley, a dozen miles to the east.” The Trust describes the land as a thriving ecosystem that will now be preserved for animals and people in the future.

Yosemite, one of America’s first national parks, was founded in 1890 and is about 750,000 acres in total. It’s been thriving, Nathan notes. “The park has seen record visitation in recent years and is expected to break 4 1/2 million visitors this year,” he says.

Meanwhile, a mystery set on those rocky cliffs of Yosemite Valley has been solved.

As The New York Times reports, a visitor to the national park recently glimpsed a bride and groom embracing before a stunning backdrop, and snapped a picture. But the couple headed down a trail before the photographer could get their attention.

The photo was posted to Instagram, and people around the world levied the power of the Internet to try to track down the couple.

Late on Tuesday, the Times reports, the bride and groom — Catherine Mack and Rick Donald — reached out to the photographer, Mike Karas.

Mack was delighted to discover what she called a “slightly epic shot.”

This year marks the 100th anniversary of the National Park Service — created 25 years after Yosemite to manage all the national parks and monuments. You can read NPR’s coverage of the centennial here.