World’s Aid Agencies Stretched To Their Limits By Simultaneous Crises 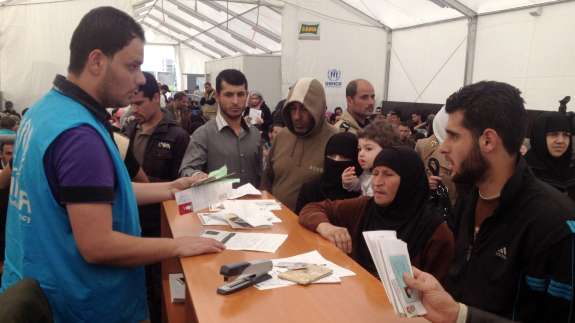 A picture taken with a smart phone shows Syrian refugees queuing at one of the many UNHCR (United Nations Refugee Agency) registration centers in Lebanon. At the same time that civil wars and the Ebola outbreak are plaguing countries in Africa, Syrian and Iraqi refugees are seeking help from agencies.
Image credit: Joseph Eid

For the first time, the United Nations is handling four major humanitarian crises at once: refugee crises in Syria and Iraq as well as civil wars in the Central African Republic and South Sudan, where millions are at risk of famine. Meanwhile, West Africa is experience a devastating Ebola outbreak.

The world’s aid agencies are stretched to their limits. Leading the U.S. response to these crises is the U.S. Agency for International Development, whose assistant administrator for the Bureau of Democracy, Conflict and Humanitarian Assistance, Nancy Lindborg, spoke with Morning Edition.

“We are probably at a near-historic level of humanitarian need right now,” Lindborg says. “We have, for the first time in the history of USAID’s Office of Foreign Disaster Assistance, four disaster assistance response teams deployed … to high-tempo, big crises around the world at the same time. And this is in addition to … ongoing needs that are being met in Nigeria, Gaza, Burma, the Democratic Republic of Congo, Afghanistan, Pakistan and the emerging crisis in Ukraine.”

Lindborg noted a striking contrast between addressing all the current crises and the aftermath of Typhoon Haiyan in the Philippines last November and December. “It was up and over in about a month,” she says. “However, what we have now…are really complex, difficult crises that are fundamentally the result of non-democratic governments.” In the Philippines, “Nobody was shooting anyone. And so, for humanitarian workers to be able to go in after there was a clear beginning and move progressively toward a better outcome, there’s something very satisfying about that in contrast with the kind of crises we’re seeing.”