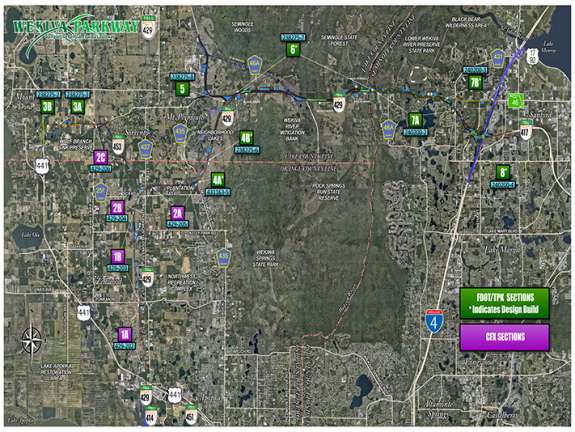 Wekiva Parkway will run twenty-five miles from I-4 to the 441 in Apopka. Photo: Central Florida Expressway Authority.

Construction starts today on the Wekiva Parkway. The $1.6 billion project is the result of thirty years of talks between expressway authority officials, residents, and environmental advocates about preserve state parks while ensuring a faster route from I-4 to Apopka.

The Wevikva Parkway will be Central Florida’s first expressway with all electronic tolls. Expressway authority officials expect it to help drivers in northwest Orange County and parts of Lake and Seminole counties get to I-4 easier.

“We’re able to do it in a way that’s going to help protect the wildlife and also help to open up some of those state-owned recreational areas that we have in that region—Rock Springs Run Reserve, Wekiwa Springs State Park,” said authority spokeswoman Mary Brooks.

Ten miles of the road will have trails for walkers and bikers.

The first phase of the project will cost $56 million dollars and should be finished in 2017. The final project will be completed by 2021.