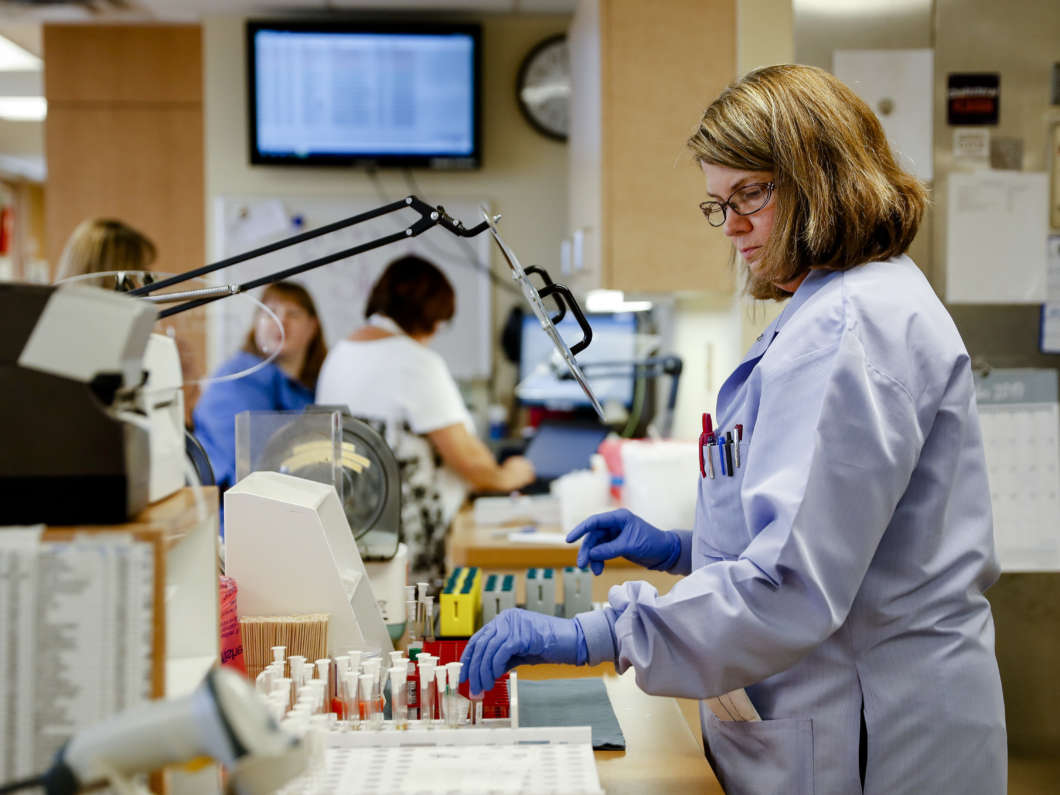 Women got the lion's share of new jobs in December and now outnumber men on U.S. payrolls. This unusual situation reflects the growth of industries like health care where women dominate.
Image credit: John Minchillo

Job growth slowed last month as U.S. employers added just 145,000 jobs. But there was an interesting milestone in Friday’s report from the Labor Department. Ninety-five percent of the net jobs added in December went to women.

Women now hold just over half of all payroll jobs in America, for only the second time in history. The first was during the Great Recession, when a wave of layoffs hit male workers first, temporarily giving women an edge in the workplace. The period was even dubbed the Mancession.

Before long, though, women were hit with their own layoffs. And their numerical advantage didn’t last.

This time could be different, because women’s gains come from being hired at a faster pace than men.

“I feel very strongly that a year from now, their share will continue to be over 50%,” says Betsey Stevenson, a University of Michigan economist who served in the Obama administration.

(Importantly, the Labor Department’s count of payroll workers excludes both farmers and the self-employed. Men still dominate both of those categories.)

The growing number of women on company payrolls reflects a long-running evolution away from male-dominated industries like manufacturing toward the service side of the economy, where women have an edge.

“That’s what the U.S. does. We’re a service-sector economy,” Stevenson says. “The service sector is really broad. It’s not just about serving coffee or taking care of children.”

Serving coffee and taking care of children are big businesses, though. The hospitality industry alone added 40,000 jobs in December. Women hold 77% of the jobs in health care and education — fast-growing fields that eclipse the entire goods-producing sector of the economy.

“The sectors that typically tend to employ men, like mining, manufacturing — those have all been in decline,” says Megan Greene, a senior fellow at Harvard’s Kennedy School of Government. Factories shed 12,000 jobs in December while mining and logging lost 9,000.

“The low interest rates we’ve been seeing recently has generated more of a housing boom than we expected at the beginning of the year,” says White House economist Tom Philipson.

But Greene says the U.S. is likely to keep adding jobs faster in industries where women have traditionally played an outsize role. That could be a factor keeping wage gains in check, since women often work in lower-wage industries, and they tend to earn less than men.

“If we’re adding most of our jobs at the low end of the pay scale, we’re not getting much upward pressure on wages,” Greene says. “And that’s I think why wages have been so frustratingly low in this recovery.”

Over the last year, average wages rose just 2.9%, even though unemployment is at a 50-year low.

On the positive side, the growing number of women in the workplace is likely to reshape demand for things like flexible hours and paid family leave, which working men might appreciate as well.

“The bigger the footprint women have, the harder it is to say this is a fringe group that wants a fringe benefit, and the labor market won’t stand for it,” Stevenson says.

In some ways it’s only a footnote that women’s share of payroll jobs went from just below 50% in November to just above that threshold last month. But in other ways, it’s a watershed.

“It reminds us to take a moment and think about the kind of strides women have made in the labor market,” Stevenson says. “But also, the future of the labor force is going to involve greater women’s equality.”

For years now, Stevenson says, women have been outpacing men in education. That investment should pay more dividends for the economy, as women’s numbers grow in the workplace.