Women For Trump Look To The Future, Not The Past 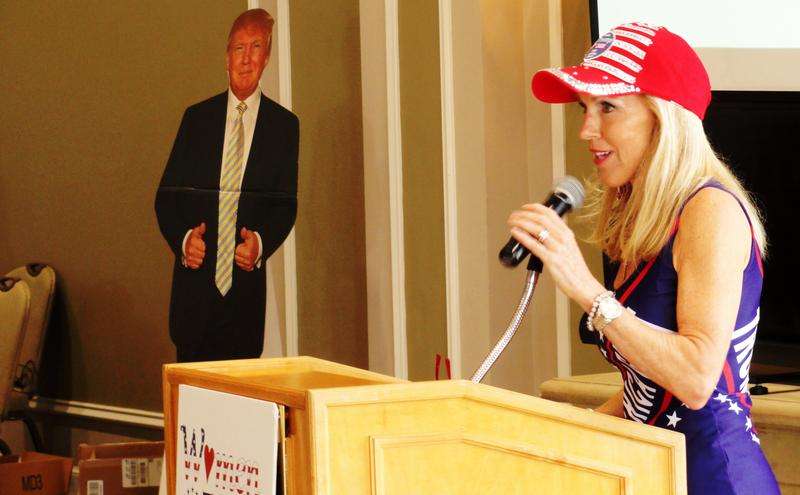 While much of the nation’s attention has focused on the Democratic candidates for president, there is also a Republican primary in Florida next week. During a recent luncheon hosted by Women For Trump Florida in Manatee County, even though some expressed concern about the president’s past dealings with women, they say their focus is strictly on the future.

Just before a meal of chicken parmesan and couscous is served, Caroline Wetherington says an invocation, praying for Donald Trump and his family and then against the coronavirus.

“Today, we plan those promises over this virus,” she says. “We believe in the healing power of faith and prayer, and we ask you to begin your mighty work in the lives of these children who are afflicted with this illness.”

Wetherington is resplendent in a glittery Trump 2020 hat, and a bright reflective Women For Trump pin adorns her jacket, all done up in red, white and blue. She fits right into this crowd that fills the Lakewood Ranch Golf and Country Club.

The California native founded Women For Trump Florida a year ago. Since then, the nonprofit, faith-based group has blossomed from 35 members to more than 5,000 people on their email list.

“It was actually very surprising,” she said. “When I started, I thought, oh, it’s just going to be a little ladies’ lunch group. And it just exploded.”

She attributes that to a pent-up desire for people to be free to express their views.

“I think a lot of people – especially in this age group, in this area – are a little afraid to do that,” Wetherington said. “You know, there’s just so much media about people wearing red hats and getting kicked out of restaurants, or somebody’s car getting scratched because they have a Trump sticker on it.”

Wetherington says the economy is her biggest issue. Her three children had trouble getting jobs coming out of college, and opportunities for young people tops her list. That – and upholding the sanctity of life by overturning Roe v. Wade.

“I really love what I’m doing right now, because I feel that God is giving me this purpose for right now in my life,” she said.

About 150 people – overwhelmingly white and middle-aged and up – are jammed into the ballroom to hear a speaker who promises to reveal how Marxism is infiltrating the church.

One speaker at the event called the upcoming election “World War III,” a spiritual battle for the nation’s soul.

After his speech, I ask several women why they support the president’s re-election. For Chrissy Blevio of Bradenton, who works at a pro-life organization, the answer is simple.

Freedom of religion and “freedom in general” are her other issues.

Blevio says when she has knocked on doors, she gets comments from people who agree with her message but say they “can’t stand” the president. Her response is you have to look past Trump’s tweets.

“I’ve talked to a lot of politicians who promise – they B.S. you to death. And then they don’t do anything they say they’re going to do, or they do the opposite,” she said. “So talk means absolutely nothing to me. Show me what you’re going to do. Do something.”

Vickie Rubin of Lakewood Ranch says these are her top issues:

“Freedom and Liberty. Which I feel, unfortunately the Democrats seem to be going socialist,” she said of their recent debates. “And when I think of socialism, I think of Venezuela, I think of Lenin, I think of all those things. I don’t want that to happen to our country.”

Trump, to her, represents “freedom.”

“I think so many people hate him because sometimes he can be crazy with his verbiage,” she acknowledged. “But what he’s doing for our country is going to help me and every other American. He’s going to preserve my freedom.”

She also complimented Trump’s foreign policy, like backing Israel and being “the first president to actually stand up against China.”

All three women said they have to put that out of their minds at the ballot box.

“I do push it into the back. Because that was the past. Every single one of the men up on that stage probably have the same past as Donald Trump. We have to let it go,” said Rubin.

“He’s a human being. Just as we all are. We’re all sinners, we all make mistakes. So I watch what he does, you know?,” said Blevio.

Many analysts believe “white suburban women in the South” are a key constituency in this campaign. One statistic shows they gave Trump 64% of their vote in 2016.

Compartmentalizing the vote might be one of the keys to President Trump remaining in the White House.

This story is part of the I-4 Votes project, a collaboration between the NPR stations in Tampa and Orlando. The project will spend 2020 focusing on the issues that matter to voters as they decide who they want to be President of the United States.