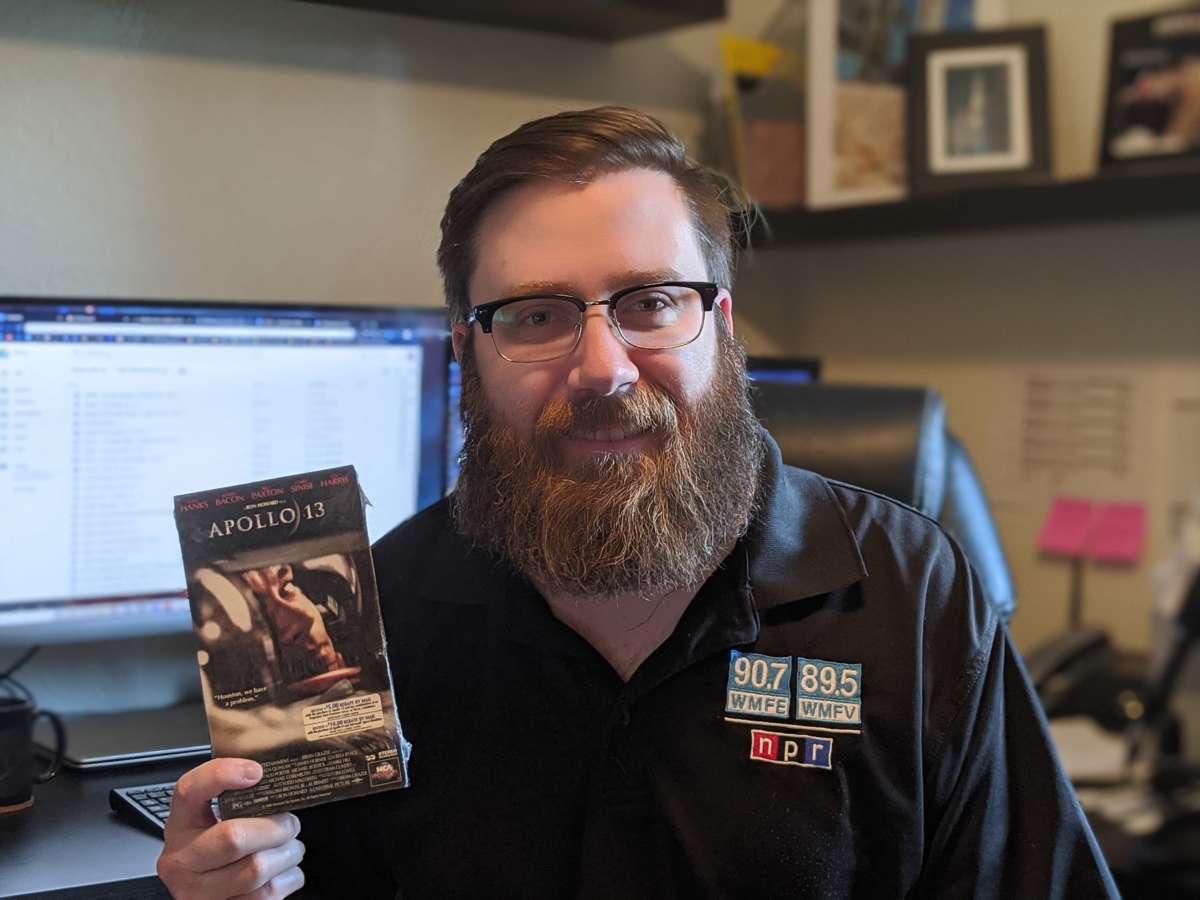 Space reporter Brendan Byrne dug out his VHS copy of "Apollo 13", one of his movie picks to help you get away from it all this weekend. Photo: Madeline Byrne

Movies are one way to fill up a few hours. We’ve pulled together a few recommendations from WMFE’s staff for your weekend social distancing.

You can still read the latest coronavirus news here.

Apollo 13: A triumph of engineering, leadership and a never-give-up attitude, Apollo 13 is a great watch even if you’ve seen it a dozen times already. With the 50th anniversary of this mission just around the corner, now is a good time to catch up on the near-failed Apollo mission. As you watch, keep a careful eye on the flight controllers who were responsible for saving the crew and keeping the team calm. We spoke with one of those controllers, Gerry Griffin, on our podcast last year. Listen [https://www.wmfe.org/apollo-flight-controllers-the-people-who-made-moon-missions-happen-2/127380] (Starz: Amazon)

Deep Impact: One of the more scientifically accurate asteroid movies of the ’90s (I’m looking at you, Armageddon), it’s a classic tale of catastrophe and the spirit of humanity in times of crisis. Are We There Yet? contributor and UCF scientist Josh Colwell served as a science advisor for the film – and makes a cameo in the mission control scene. Can you spot him? (Amazon, Google Play, Apple TV & more)

Kerbal Space Program (video game): Everything I learned about orbital mechanics and rockets, I learned from KSP. That’s not saying much! It is a tough but addictive game. Take control of your own space agency and send your Kerbals to the stars! There’s plenty of YouTube videos to help you out along the way. It will take a while to get off the ground, but once you do, you’ll find you have an insatiable thirst to explore the universe. (PC, Steam Store)

Blinded by the Light: You can’t give up on a dream or Bruce Springsteen. This Jersey Boy cried and cheered all the way through it. (HBO GO)

Network: If you think TV news is bad now, take a look back to the ’70s. (Amazon)

Every Planet of the Apes movie except the one with Mark Wahlberg: What can I say, I’ve been obsessed since I was kid. They’ll keep you busy all weekend. (Various)

Lord of the Rings Trilogy: The Fellowship of the Ring, The Two Towers, and The Return of the King. Frodo must journey to Mount Doom to destroy a ring. Just over 11 hours of movie watching should get you in the mood to read a little J.R.R. Tolkien. (Netflix)

Kung Fu Hustle: Extremely fun and over the top if you grew up watching all the great movies on Kung Fu Theatre. Set in 1940s Shanghai, China, a wannabe gangster aspires to join the notorious “Axe Gang” while residents of a housing complex exhibit extraordinary powers in defending their turf. (Crackle)

Beowulf & Grendel: Starring Gerard Butler and Stellan Skarsgård. Filmed in Iceland, it’s a decent adaptation of Beowulf (there have been horrible ones). It’s based on the Old English epic poem and one of the most important works of Old English literature. If you would rather read it, Tolkien’s translation is fantastic. (Amazon Prime)

Bridge on The River Kwai: Words can’t describe this masterpiece. It means different things to different people. To me, it means an insane officer following orders of his enemy captors to hurt the Allies, who he is fighting for. Watch it and you’ll understand. Be prepared to whistle the theme song. (Crackle)

Bull Durham: I miss baseball. This is a 1988 American romantic comedy sports film that depicts the players and fans of the Durham Bulls, a minor-league baseball team in North Carolina. (Amazon Prime)

Field Of Dreams: Can you tell I miss baseball? When Iowa farmer Ray hears a mysterious voice one night in his cornfield saying “If you build it, he will come,” he feels the need to act. (Hulu, Amazon)

Anne of Green Gables: Follow the adventures of Anne Shirley (Anne with an “e”) as she finds family, friendship, and love in her small adopted hometown of Prince Edward Island. Watch the original CBC version or the fantastic Netflix re-imagining.

Big Fish: Are the stories that Edward Bloom tells his son real or imagined? You’ll find the fantastic in everyday life after watching this uplifting and heart-wrenching tale. Plus, every proposal scene needs to have a Buddy Holly soundtrack and daffodils.

Chocolat: The story of one woman and her mission to bring her family’s time-honored family tradition of chocolate making to a small conservative town in France. A powerhouse cast of female actresses from Juliette Binoche to Lena Olin will have you saying, “Who says I don’t know how to use a skillet!”

Boy: Another bittersweet Kiwi classic directed by Taika Waititi. Stick around for the Thriller / Haka mashup over the end credits. (Amazon Prime)

Shaun of the Dead; Hot Fuzz; World’s End: Director Edgar Wright, with his “three flavors, cornetto” trilogy, deploys classic British humor and elevates each of the three genres he takes on while poking fun at them. Eminently rewatchable. (Amazon/Hulu)

Galaxy Quest: A spoof of sci-fi tropes, especially my beloved Star Trek: The Next Generation, and a funny and warm movie in its own right. “Never give up, never surrender!”

Avengers: Some of the finest superhero escapism around. “I understood that reference.”

And here’s some music on WMFE to unwind to:

World Cafe
8 p.m. Saturday & Sunday
The two-hour program features a mix of artist interviews with in-studio performances by both established and emerging artists.

eTown
10 p.m. Sunday
eTown’s mission is to educate, entertain and inspire a diverse audience through music and conversation in order to create a socially responsible and environmentally sustainable world.

Classical Music
24/7
Tune in to WMFE Classical on your HD radio (WMFE-HD2), stream at wmfe.org or in the WMFE app, or ask your Amazon device to play “WMFE HD2 Classical”.