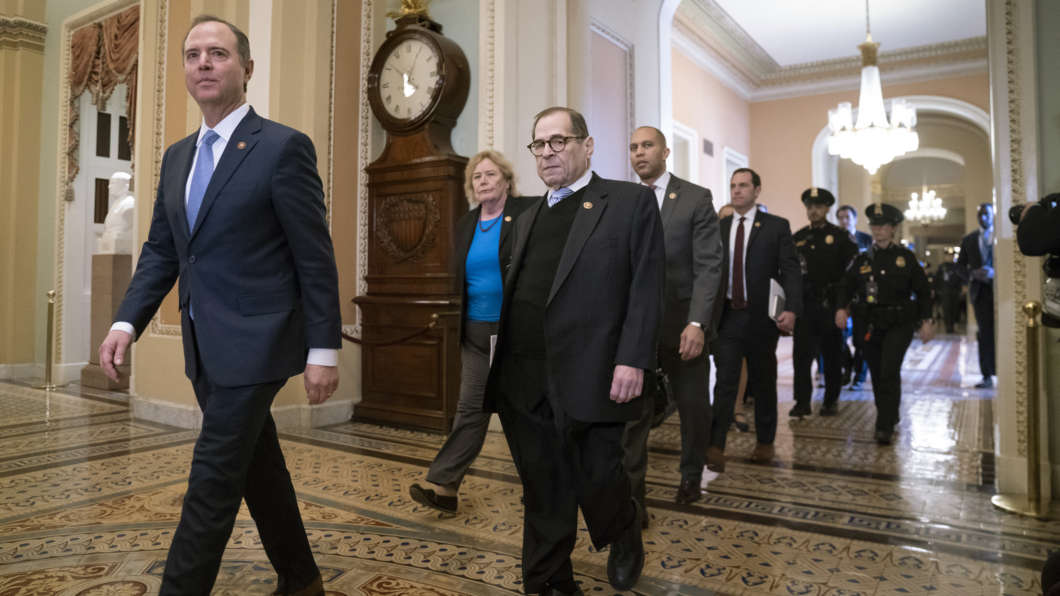 Opening arguments will be made Wednesday in the Senate impeachment trial of President Trump.

When the trial resumes at 1 p.m. ET, the House managers will begin to formally make their case that the Senate should convict President Trump on two articles of impeachment, which charge him with abusing the power of his office and with obstructing Congress. Watch the proceedings live.

At nearly 2 a.m. ET on Wednesday morning, the Senate adopted a resolution that calls for 24 hours of opening statements for each side, to be spread over three days, after rejecting efforts by Democrats to subpoena documents the Trump administration has refused to turn over.

In Davos, Switzerland, where he was attending the World Economic Forum meeting, Trump re-emphasized his view that the impeachment case against him is a “hoax.”

“I think it’s so bad for the country,” he said, adding: “I’d love to go to the trial, sit in the front row and stare at their corrupt faces.”

The president, who has said he is open to hearing from witnesses in the Senate trial, said Wednesday that that decision was ultimately up to the Senate.

“Personally, I’d rather go the long route,” he said. But Trump, who is returning to Washington on Wednesday, also cited “national security” for why he has reservations about testimony from some witnesses Democrats are seeking, such as Bolton. Trump said that Bolton knows too much about his personal conversations with other world leaders and that revealing them in any testimony could hurt the presidency.

It is still possible but unclear whether the Senate will hear witnesses after the two sides have made their opening arguments. A number of GOP senators have expressed support for hearing from some witnesses. It would take four Republican senators voting with the 47-member Democratic caucus to call for witnesses. But that would likely not happen until next week.