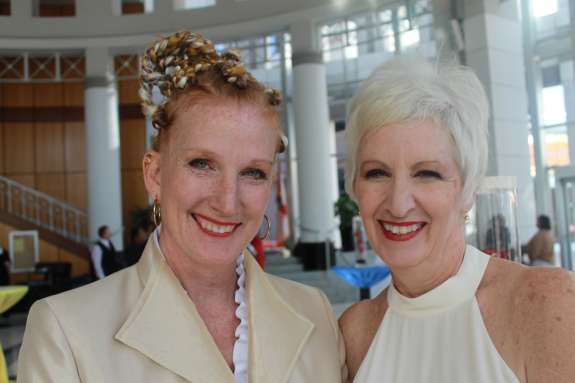 Peggy Rowan Winkler (left) and Meredith Dobbins were among the newly married. Photo by Amy Green

Central Floridians are among those rushing to wed now that the state’s same-sex marriage ban has been lifted.

More than 40 gathered Tuesday in front of Orlando’s City Hall for a ceremony officiated by the mayor.

Peggy Rowan Winkler and Meredith Dobbins of Deland were among the newly married. They’d been together for 24 years. Dobbins said she was overjoyed.

“It’s just super-awesome to finally be able to call her my wife and let the world know what she means to me as opposed to something less significant like my girlfriend or my partner or my significant other, which she’s not.”

Rev. Kathy Schmitz of The First Unitarian Church of Orlando delivered the blessing. The Orlando Gay Chorus sang. Only one protester turned out.

Florida is the 36th state to recognize same-sex marriage after a federal judge found the state’s ban unconstitutional. Marriages began Monday in Miami and statewide Tuesday.