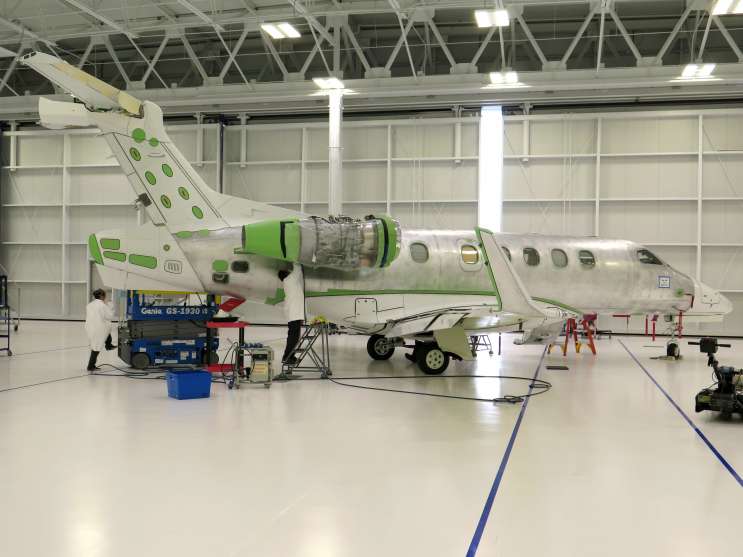 It has been five years since NASA retired the space shuttle, ending a federal program that employed some 10,000 people around Cape Canaveral, Fla.

The loss of those jobs was a blow to Florida’s Space Coast, an area closely identified with NASA and the nation’s space program. But the region’s economy is bouncing back and attracting companies that are in a new space race.

In fact, it might be more accurate now to call it the Aerospace Coast. In 2009, the Brazilian jet maker Embraer gave this region a boost when it broke ground on its plant in Melbourne, Fla.

Plant director Phil Krull is proud of the spacious, remarkably quiet production area. A few air drills and some occasional clangs sound. “This is about as noisy as you’re going to hear out here,” he says as he walks through the plant. At least a dozen small jets are in various stages of assembly. Krull says all the parts are shipped from Embraer’s home facility in Brazil.

Embraer employs about 600 people here and is expanding. Its main product is the Phenom 300, the best-selling business jet in the world. “It’s a workhorse,” Krull says. “The skins are thicker than our competitors’. But it’s just a great design.” And it comes with a price tag of about $10 million each.

Embraer was lured to Melbourne by generous incentives and a talented workforce. The company hired engineers and technicians who used to work on the defunct shuttle program. When the program ended, several thousand people found themselves out of work, just as the recession began.

“Having both at the same time, I don’t think you could probably pick a more severe circumstance,” says Lynda Weatherman, who heads the region’s economic development commission. “We had an unemployment rate that was near 12 percent and that’s a lot.”

Since then, the Space Coast has attracted companies that don’t just launch from here, but also do research, development and manufacturing.

Lockheed Martin and Boeing started that trend when they won contracts to build the next generation of NASA spacecraft. Lockheed is working on the Orion deep space mission. Boeing is building a commercial crew capsule to service the International Space Station.

Weatherman says those contracts sent an important message to people and companies on the Space Coast: “There was a second act for space.”

Billionaire Jeff Bezos gave the region a lift last fall when he announced he was bringing his Blue Origin company to the Space Coast, along with a $200 million plant and more than 300 jobs. It will be part of a complex for commercial space companies just outside the gates of Kennedy Space Center.

At an event with Florida’s Gov. Rick Scott on hand, Bezos said: “We’re not just launching from here. We’re building here.” Blue Origin will be launching its rockets from Cape Canaveral by the end of the decade, carrying commercial payloads and eventually, Bezos says, space tourists.

“We’re building satellites not like artisanal pieces but we’re building them more like medical or aviation products,” Wyler says.

Add these jobs to others at companies like Northrop Grumman, which recently won the Air Force contract for the next generation stealth bomber, and officials here say the Space Coast has recovered most of the jobs lost at the end of the shuttle program.

After years of depending on government contracts, the region is now just beginning to tap the commercial space industry’s potential.

Dale Ketcham, with Space Florida, a state agency focused on attracting aerospace ventures, says over the next 10 years, NASA has just two launches planned. But over that same time period, he says, “You’re probably going to see a couple of hundred commercial launches. So that’s the growth opportunity.”

Some of the startups hope eventually to get a big financial return from mining asteroids. With SpaceX and other companies now sending up rockets, Cape Canaveral last year had 17 launches, its busiest year since 2003.