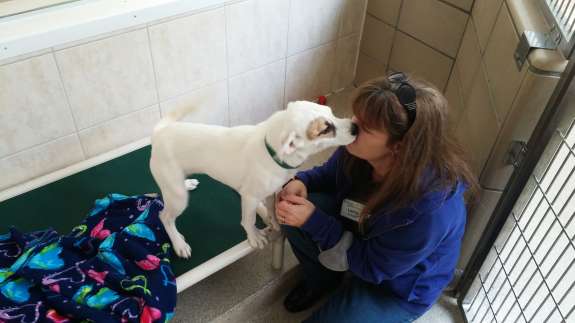 Laurie McCannon, director of the Northeast Animal Shelter in Salem, Mass., with a dog named Trina. Three-quarters of the dogs adopted from the shelter in 2013 were from out of state.
Image credit: Greg Allen

Just north of Boston, the Northeast Animal Shelter is one of the largest private shelters in New England. Founded in the 1970s, it went through a big expansion about 6 years ago, building a new 13,000-square-foot shelter with three isolation rooms.

The rooms were designed to house the increasing number of dogs the shelter transports from other states and Puerto Rico.

In one isolation room, Laurie McCannon, the shelter’s director, points out a group of animals that have just arrived from Tennessee. In another are some of the 20 dogs that arrived at the shelter a few days earlier, flown in from Texas.

Over the last two decades, there have been big changes in animal shelters and the pet industry. With the growth of pet rescue groups, the demand for dogs now outstrips the supply of those available for adoption in many states.

In several parts of the country, shelters now import dogs for adoption from other regions — even other countries. That has veterinarians, and even some pet rescue groups, concerned about what some call “dog trafficking.”

In its early days, Northeast Animal Shelter used to place about 300 dogs a year in new adopted homes. McCannon says they adopted out 4,400 dogs in 2013, three-quarters of them from out of state.

“It started out with Puerto Rico, and then [we] went to a great shelter in Nebraska that we’ve worked with forever. I think at one point we actually dealt with five different shelters in Georgia alone,” McCannon explains.

Shelters tell a similar tale throughout New England and the Northeast, as well as in the Northwest and Great Lakes regions. Decades of spay and neuter programs, combined with strong participation by rescue groups, have greatly reduced the number of unwanted dogs and cats.

McCannon says it’s a different story in rural states and in the South. “The South still has a lot of work to do with spay-neuter laws, and getting people to feel that pets are more companions and parts of their family than yard dogs or that kind of thing,” she says.

Some people point to Hurricane Katrina as a turning point: The beginning of widespread interstate shipments of animals for adoption. Efforts to rescue and find new homes for dogs stranded in New Orleans showed groups a new way to find placements for unwanted dogs.

Now, a network of shelters and rescue groups transport tens of thousands of dogs each year from other states and other countries.

“There is a lot of money in this new kind of rescue that has emerged,” she says. “These groups move dogs from just about any place that they can get them.”

But some states, like Connecticut, do. In 2012, 14,000 animals were brought to Connecticut from other states, says Arnold Goldman, a veterinarian in Connecticut who’s been concerned about the booming interstate movement of dogs. He says he’s seen a lot of health issues, like mange and heartworm, as a result.

And there’s a deeper issue, Goldman adds. “There are Connecticut-origin animals in our brick-and mortar shelters who wait for homes themselves,” he says. “And there is something disconcerting about that.”

Rescue groups are finding unwanted dogs to transport in the South and in other countries, including Mexico, Taiwan and India — all countries where rabies is endemic in the dog population.

Strand says the concern about rabies is more than theoretical.

In Massachusetts, Connecticut and some other states, regulations have been tightened in recent years to require rabies certificates and 48-hour quarantine periods for dogs arriving from outside the state.

But problems persist. A puppy transported to Vermont in 2013 and adopted by a family was euthanized after it developed rabies.

The National Association of State Public Health Veterinarians has asked the Centers for Disease Control and Prevention to ban the import of dogs from countries where rabies is endemic.