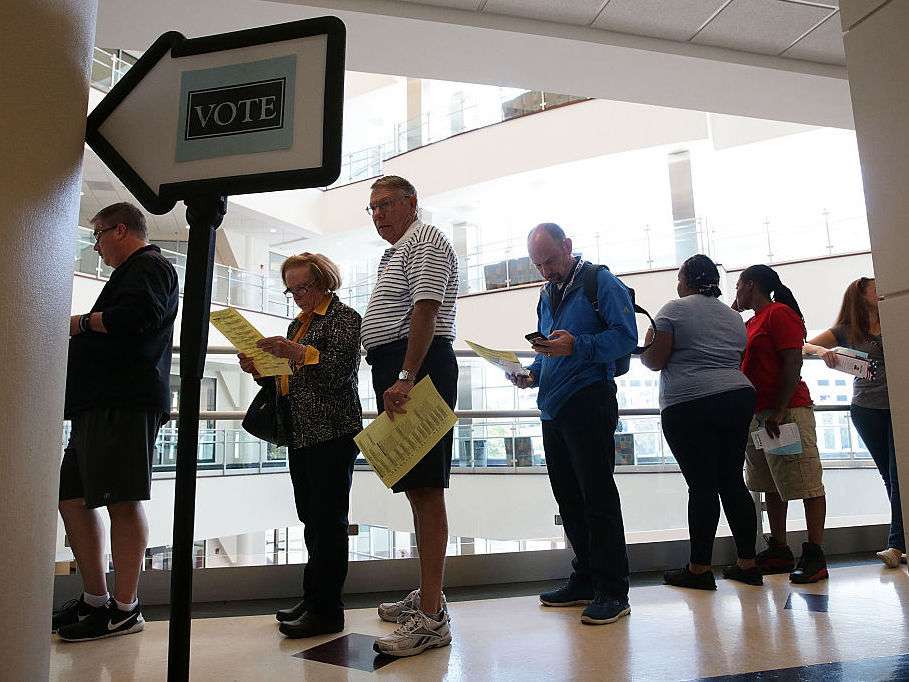 Voters in Winston-Salem, N.C., wait in line to cast their ballots during early voting for the 2016 general election.
Image credit: Alex Wong

The U.S. Justice Department says it will have more than 500 monitors and observers out Tuesday watching polling sites in 28 states. They’ll be looking for any voting rights violations, such as whether voters are discriminated against because of their race or language.

“The bedrock of our democracy is the right to vote, and the Department of Justice works tirelessly to uphold that right, not only on Election Day, but every day,” Attorney General Loretta Lynch said in a statement.

This number of observers and monitors is about two-thirds the number of people the department had watching the polls in 2012. The reduction is due to the Supreme Court’s 2013 ruling striking down a key portion of the Voting Rights Act, which the department says authorized the use of DOJ observers in states and other jurisdictions covered by the law. Those areas were under federal oversight because of past discrimination against voters.

The change also means that of the 500 personnel, fewer DOJ personnel will be stationed inside polling places as official poll observers. Instead, more will be monitoring the election from outside, which gives federal authorities less opportunity to spot irregularities and correct them while individuals are voting.

The department will not release a breakdown of how many observers versus monitors there will be on Election Day.

But Vanita Gupta, assistant attorney general for civil rights, said in a statement: “In most cases, voters on the ground will see very little practical difference between monitors and observers. We work closely and cooperatively with jurisdictions around the country to ensure that trained personnel are able to keep an eye on the proceedings from an immediate vantage point.”

Some civil rights groups are concerned about the reduction in observers, in light of increased tensions in this year’s elections. Republican candidate Donald Trump has repeatedly said he thinks the election is rigged, and he called on his supporters to go watch the polls for possible cheating. This has raised fears of intimidation of voters, especially minorities.

In addition, a number of states have new voting requirements — such as strict voter ID laws — that civil rights advocates say could cause confusion at the polls and lead to some individuals being denied a chance to vote.

DOJ says it will have people watching voting sites in 67 jurisdictions around the country, including many in Florida, North Carolina, Texas and Pennsylvania.

The agency says voters should report any disruptions at polling places to election officials or local law enforcement authorities, then to DOJ. The department will have staff members taking complaints on a toll-free hotline, 1-800-253-3931, and by email at voting.section@usdoj.gov.

Numerous other groups will have people watching the polls for problems, including civil rights organizations and groups that say they’re on the lookout for any fraudulent voting. In addition, most polling places will have official poll watchers, often one Democrat and one Republican, sitting inside to help ensure that the process is fair.